On Sunday, the FBI confirmed suspect Anthony Warner as the culprit of an explosion that caused widespread damage in downtown Nashville on Christmas morning; U.S. Attorney Don Cochran said that Warner died in the explosion. The Nashville police department's hazardous devices unit was responding to reports of a suspicious RV when the vehicle exploded. Witnesses purportedly heard a warning coming from the vehicle saying, "Evacuate now... A bomb is in this vehicle and will explode." The impact injured three people and damaged 41 buildings, as well as communications systems across the state. On Saturday, Gov. Bill Lee asked the White House for federal assistance due to the "severity and magnitude" of the explosion. The Nashville sheriff's office said that police emergency systems across Tennessee and Kentucky, as well as Nashville's COVID-19 community hotline, are out of service due to an AT&T central office containing a telephone exchange and network equipment being affected by the blast.

The explosion received coverage from all sides of the political spectrum. Coverage from left- and center-rated outlets tended to focus on the investigation and the impact of the blast. Some right-rated outlets highlighted the lack of fatalities and the police officers who cleared the area.

This story was updated 12/27/20 at 3:30pm PT to include the FBI's confirmation of Warner as the suspect. 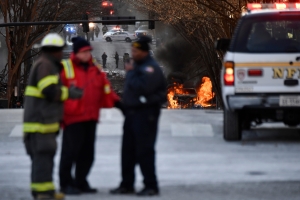 Anthony Q. Warner, 63, has been identified as the "bomber" in the Christmas day explosion in Nashville by U.S. Attorney Don Cochran.

Cochran announced the update to the investigation in a Sunday afternoon news conference.

"Anthony Warner is the bomber. He was present when the bomb went off, and he perished in the bombing," Cochran said.

DNA found at the scene was matched to samples taken at another location searched by investigators, TBI Director David Rausch said Sunday. The TBI was involved in testing the evidence.

The FBI has confirmed that Anthony Warner, 63, was the culprit behind a Christmas Day bombing in downtown Nashville.

"Based on the evidence that we got at this point, we’ve come to the conclusion that an individual named Anthony Warner is the bomber," U.S. Attorney Don Cochran said, adding that Warner perished in the explosion.

The explosion left at least three people hospitalized and 41 businesses damaged — perhaps most significantly an AT&T facility adjacent to where the RV that exploded was positioned. The blast caused outages in parts of...

Read full story
Some content from this outlet may be limited or behind a paywall.
See full media bias rating for Washington Examiner
From the Left
3853
Disaster
Widespread outages and search for clues continue following Nashville explosion: "The damage is shocking"
CBS News (Online) 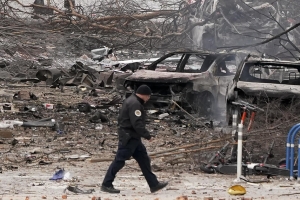 Sweeping communications outages continued to plague large swaths of Tennessee on Saturday after a recreational vehicle exploded early Christmas morning in downtown Nashville. Meanwhile, federal investigators are searching for clues after the explosion that damaged dozens of buildings.

Police emergency systems across Tennessee and Kentucky, as well as Nashville's COVID-19 community hotline, remained out of service due to an AT&T central office being affected by the blast. The building contained a telephone exchange, with network equipment in it - but the company has declined to say exactly how many people...

News
At least 29 dead in Haiti after 7.2 magnitude earthquake hits Caribbean nation: Quake is stronger than the 2010 disaster that killed thousands
Daily Mail