This is the third consecutive 0.75-point rate hike this year, pushing the Fed’s benchmark federal funds rate — the interest rate at which banks borrow from each other to meet asset holding requirements — to its highest levels since 2008. A statement from the Fed’s Federal Open Market Committee (FOMC), which makes interest rate decisions, cited “modest growth in spending and production,” “robust” jobs gains, low unemployment and “elevated” inflation.

The move delivers on Fed Chairman Jerome Powell’s pledge to continue fighting inflation even if it brings “some pain to households and businesses” because, he said, “failure to restore price stability would mean far greater pain.” Inflation has slowed since the Fed began raising interest rates, as falling gas prices countered rising housing and food costs. However, GDP growth has also remained slow, meeting the common definition of a recession in the first two quarters of 2022. The FOMC said it would “be prepared to adjust the stance of monetary policy as appropriate if risks emerge that could impede the attainment of the Committee’s goals.”

Coverage was immediately prominently featured across the spectrum, particularly in business-focused outlets. Some coverage in business outlets highlighted the impact on the stock market. Some headlines used descriptive language like “massive rate hike” and “Fed goes big again.” 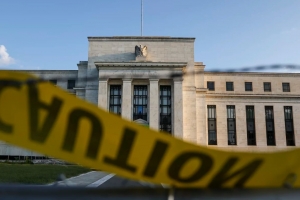 The Federal Reserve ordered another super-sized jump in interest rates today, and signaled that additional rate hikes are likely in the coming months, as it tries to put the brakes on runaway prices.

The central bank raised its benchmark interest rate by 0.75 percentage points Wednesday, matching hikes in June and July. The Fed has been boosting borrowing costs at the fastest pace in decades. But so far, its actions have done little to curb the rapid run-up in prices.

The annual inflation rate in August was 8.3% — down only slightly... 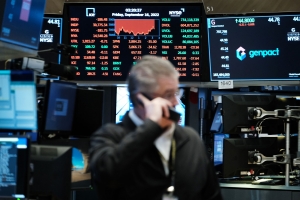 The Federal Reserve imposed the latest in a series of sharp interest rate hikes on Wednesday in a sign that policymakers aren’t backing down from an aggressive campaign to lower decades-high inflation.

The rate-making Federal Open Market Committee hiked the benchmark interest rate by 0.75%, or 75 basis points, at the end of a two-day meeting. The latest increase moved the Fed’s target range to between 3% and 3.25%.

In a statement after the meeting, the FOMC said it “anticipates that ongoing increases in the target range will be appropriate”...

The Federal Reserve on Wednesday raised benchmark interest rates by another three-quarters of a percentage point and indicated it will keep hiking well above the current level.

In its quest to bring down inflation running near its highest levels since the early 1980s, the central bank took its federal funds rate up to a range of 3%-3.25%, the highest it has been since early 2008, following the third consecutive 0.75 percentage point move.

Stocks had given up earlier gains after the announcement, with the Dow Jones Industrial Average dropping more than 200...