Email leak from the DNC shows that they might have suppressed Bernie's chance at the nomination. 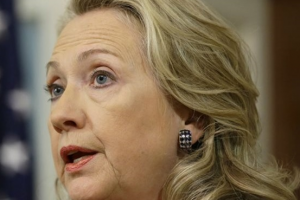 Hacked emails threatened to overshadow the Democratic Party's upcoming celebration in Philadelphia as progressives expressed disappointment Sunday over the presidential nomination process and Bernie Sanders stepped up demands that the party's chairwoman step down.

Read full story
Some content from this outlet may be limited or behind a paywall.
See full media bias rating for Newsmax (News)
From the Center
1301
Democratic Party
Debbie Wasserman Schultz Out As Democratic Convention Chair After Email Leak
NPR (Online News) 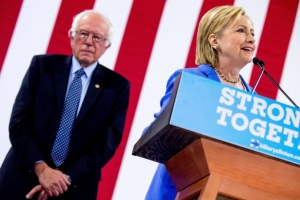 Amid furor over an email leak that revealed a bias against Bernie Sanders inside the Democratic National Committee, Debbie Wasserman Schultz is out as chair of the convention.

In an email to NPR, the office of Rep. Marcia Fudge said she "has been named permanent chair of the Democratic National Convention."

“It is not a great shock to me,” Sanders said during an appearance on CNN’s “State of the Union” on Sunday morning. “There’s no question in my mind and no question to any objective observer’s mind that the DNC was supporting Hillary Clinton and was in opposition to

Unlike in previous years, a progressive group has decided to deliver a formal response to President Joe Biden's first address to a joint session of Congress...

The House of Representatives voted on Thursday to pass a bill that would grant statehood to Washington, DC, a Democratic priority that faces obstacles to final...

Minority rule, under which a majority of Americans can't have their policy preferences reflected in our laws, is anti-democratic. But it's the hallmark of the...

Democratic Sen. Joe Manchin made it clear Wednesday evening that he opposes the frequent use of the budget reconciliation process, which Democrats have hoped...

Biden shows that only moderates can govern from the left
OPINION

It was once a number so exotic as to have no agreed definition. It is now the threshold below which Joe Biden hardly bothers to trifle. Among the weirder...

Ruling By Senate Parliamentarian Opens Up Potential Pathway For Democrats

A new decision from the U.S. Senate's nonpartisan parliamentarian means Democrats could advance more of President Biden's agenda without the support of...

Schumer says Senate will move ahead on marijuana legalization

Democrats are twice as likely as Republicans to support making Puerto Rico and the District of Columbia states, according to a new poll. The poll, released...

President Joe Biden has only revealed the first part of his infrastructure agenda, but he's already struggling to find a bipartisan way to pay for its $2.25...

The Senate parliamentarian has ruled that Democrats can pass two more pieces of legislation via budget reconciliation procedures, bypassing a potential...