On Monday, Congressman Joaquin Castro (D-TX) tweeted out the names and employers of 44 San Antonio residents who donated the maximum amount allowed to President Donald Trump's 2016 campaign, calling it "sad to see." Castro, twin brother of Democratic presidential candidate Julian Castro and chairman of his campaign, has faced criticism from all sides of the political spectrum.

Many media voices, regardless of leaning, have condemned the tweet as poor politics and dangerous in the current political climate. Some reporting, primarily on the left, focused on the fact that the donor information was already public record. 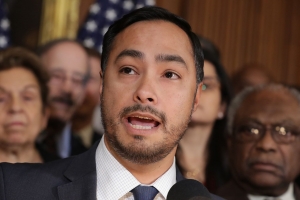 Democratic Rep. Joaquin Castro is facing a mounting backlash -- and not just from Republicans -- for posting the names and employers of dozens of Trump campaign donors in the San Antonio area, even as the Texas congressman defends his actions.

Prominent figures from outlets including MSNBC and The New York Times have called out Castro for the potentially dangerous post.

WASHINGTON – President Donald Trump's campaign and several top Republicans on Tuesday slammed Rep. Joaquin Castro, the twin brother and campaign chairman of 2020 presidential hopeful Julián Castro, after he posted a list of Texas Trump donors and their place of business.

Joaquin Castro on Monday evening criticized Trump donors from San Antonio, his hometown and the district he represents, who donated the maximum amount of $2,000 to Trump.

Rep. Joaquin Castro (D-TX) is under fire for tweeting out a list of donors to President Donald Trump. Why the maneuver is so controversial isn’t entirely clear: It’s all information that was already public.

The Texas Democrat and brother to 2020 Democratic presidential candidate Julián Castro on Monday tweeted a list of 44 San Antonio donors who contributed the maximum amount under federal law to Trump in 2019. “Sad to see so many San Antonians as of 2019 maximum donors to Donald Trump,” he wrote, calling out a couple of...

President Donald Trump has attacked rival Joe Biden and the Democrats on God as he moves to shore up support among the Christian voters that were integral to...

Fact checking Trump's claims that the US oil and gas industry is 'back' and '...
FACT CHECK

Washington (CNN)Last week, President Donald Trump visited Midland, Texas, a region deep in the heart of the West Texas oil patch. Ostensibly there for a...

Chris Wallace Calls Out Joe Biden for Turning Down Interview a Week After Trump Sit-Down: ‘We’ll...

Fox News Sunday anchor Chris Wallace was the object of much praise last week over his big, newsmaking interview with President Donald Trump, but said Sunday...

When Vice President Calvin Coolidge ascended to the presidency on the death of Warren Harding in 1923, a wag remarked that Silent Cal’s career had exhibited...

Biden questions whether coronavirus vaccine will be 'real,' despite experts'...

Joe Biden is preemptively doubting whether a coronavirus vaccine will be "real," and has cast doubt on whether the vaccine would be distributed with "any...