Julián Castro Drops Out of Primaries

Former Housing and Urban Development Secretary Julian Castro (D-TX) rescinded his bid for the 2020 Democratic presidential nomination Thursday. Castro was among the first candidates to enter the race, and was also the first to support President Donald Trump's impeachment.

Castro's move to drop out, following Senator Kamala Harris exit, rekindled disdain for the lack of diversity in the Democratic field among some media voices.

Julián Castro Drops Out of Primaries 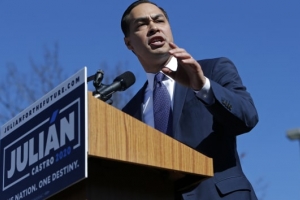 Former Housing and Urban Development Julian Castro dropped out of the 2020 Democratic presidential primary on Thursday, ending a progressive and pugnacious bid that emphasized immigration and social issues but rarely made progress in the polls.

Julian Castro is no longer seeking the Democratic 2020 presidential nomination.

"With only a month until the Iowa caucuses and given the circumstances of this campaign season, I've determined that it simply isn't our time," Castro said in a video released Thursday. "So today it’s with a heavy heart and with profound gratitude, that I will suspend my campaign for president."

Castro, the former mayor of San Antonio and secretary of Housing and Urban Development under then-President Barack Obama, would have been the first Latino president, had the voters rallied behind him. He was the first Texas Democrat to run for president since 1976.

Days before President Donald Trump’s Supreme Court pick leaked out, he had already made up his mind. Even as White House aides and allies tried to draw out...

Russian President Vladimir Putin on Friday proposed a deal with the United States that would guarantee neither country interfere in the other’s elections weeks...

President Trump named Amy Coney Barrett as his nominee for the Supreme Court Saturday evening with a live, televised reveal from the White House Rose Garden...