Biden To Raise Cap On Refugee Admissions after Democratic Pressure

President Joe Biden said Saturday his administration will increase the refugee cap after the Biden administration announced Friday it would keep the historically low 15,000 cap set by former President Donald Trump through the end of the fiscal year, which ends in September. The Friday announcement was met with pushback from refugee advocacy groups and Democratic lawmakers. “We are going to increase the number. Problem was the refugee part was working on the crisis that ended up at the border with young people. We couldn’t do two things at once, so now we are going to raise the number," Biden told reporters Saturday. White House press secretary Jen Psaki said Friday the Biden administration planned to “set a final, increased refugee cap for the remainder of this fiscal year by May 15," though Psaki didn't say how much the cap would increase. Psaki also said that, “given the decimated refugee admissions program we inherited,” it’s now “unlikely” Biden will be able to boost that number to 62,500, as he had proposed in his plan to Congress in February. Psaki said Friday the order also reversed the Trump policy that banned refugees from many regions such as Somalia, Syria and Yemen, and opens up more slots for refugees from Africa, the Middle East and Central America.

Critics from across the political spectrum criticized Biden for allegedly giving in to political pressure from Democrats. Coverage from the right tended to highlight the fact that Biden used the term "crisis" to describe the border for the first time on Saturday; some right-rated outlets also said that Psaki attempted to "shift the blame" for the delayed cap increase to the Trump administration. Coverage from the left and center tended to focus on details of the situation at the border.

Biden To Raise Cap On Refugee Admissions after Democratic Pressure 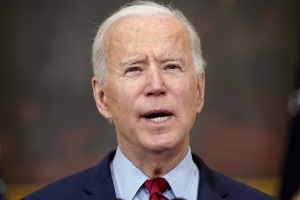 The White House on Friday said that President Biden is expected to increase the refugee cap for this fiscal year, just hours after he signed an order that kept it at Trump-era levels and sparked fury from congressional Democrats.

"The President’s directive today has been the subject of some confusion," White House Press Secretary Jen Psaki said in an afternoon statement.

Former President Donald Trump lowered the refugee cap for FY 2021 to 15,000 -- something the Biden had pledged both during the campaign and his first days in office... 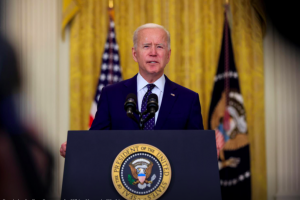 President Joe Biden said on Saturday he will raise the cap on the number of refugees admitted this year to the United States, a day after he drew criticism from Democratic lawmakers for agreeing to keep the historically low figure in place. Biden signed an order on Friday extending a 15,000 refugee admissions cap issued by his predecessor Donald Trump through the end of September. In signing the order, Biden shelved a plan announced in February to increase the cap to 62,500.

Biden told reporters in Delaware on Saturday after... 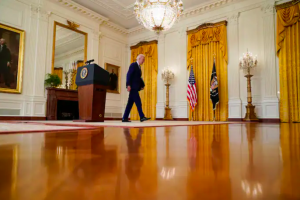 President Joe Biden plans to lift his predecessor’s historically low cap on refugees by next month, after initially moving only to expand the eligibility criteria for resettlements and getting swift blowback from allies in return.

In an emergency determination signed Friday, Biden stated the admission of up to 15,000 refugees set by President Donald Trump this year “remains justified by humanitarian concerns and is otherwise in the national interest.” But if the cap is reached before the end of the current budget year and the emergency refugee situation persists, then...

President Joe Biden is canceling further construction of the wall along the U.S. and Mexico border, the Department of Defense announced Friday. “DoD has...

WASHINGTON — President Joe Biden blamed the Trump administration for ongoing problems at the U.S.-Mexico border, citing its failure to cooperate and share...

Democratic Sen. Mark Kelly (Ariz.) criticized President Biden for not laying out a comprehensive plan to address the recent surge of migrants at the southern...

Biden Raises Refugee Cap To 62,500 After Uproar From Democrats

President Joe Biden raised the refugee cap to 62,500 Monday following weeks of criticism that his administration was too slow in revising former President...

Families separated at border under Trump reuniting in US this week

Four families separated at the southern border under former President Donald Trump will be reunited in the United States this week, the Biden administration...

President Biden has abandoned the rule of law at the U.S.-Mexico border amid the migrant crisis, sending costs for border security soaring in Texas, Gov. Greg...