Biden Says ‘Everybody’ Should Be Concerned About Monkeypox Outbreak

President Joe Biden told reporters during a stop in South Korea on Sunday that the recent monkeypox outbreak is "something that everybody should be concerned about."

This marks the president's first public remark on the recent spread of monkeypox, which has been detected in at least 12 countries. The CDC is monitoring a handful of cases in the U.S. as two men in Massachusetts and New York City have been the first to test positive for the disease. White House national security adviser Jake Sullivan said the U.S. has prepared a supply of vaccines that are "relevant to treating monkeypox." There have been 92 confirmed cases and another 28 suspected cases of monkeypox worldwide as of Saturday, according to WHO. The organization has also noted that the disease is transmitted less effectively between humans than COVID-19 and is unlikely to spark another global pandemic. Some common monkeypox symptoms include swollen lymph nodes, fever, rashes and smallpox-like skin lesions.

Coverage of Biden's comments and the spread of monkeypox was generally balanced across the spectrum. Some left-rated outlets promoted vaccination options that studies have shown "to be effective against" monkeypox such as the smallpox vaccine. Some right-rated outlets noted that monkeypox symptoms are "milder" than smallpox and that most people usually recover in 2-4 weeks without needing to be hospitalized. 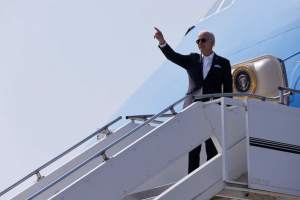 President Biden said Sunday that the United States is looking into what vaccines might be available to protect people against monkeypox, saying that “everybody” should be concerned as cases continue to spread around the world and some countries beef up their treatment stockpiles.

“We’re working on it hard to figure out what we do and what vaccine if any might be available for it,” Biden said from South Korea, where he is on an official visit.

Biden said the recent spread of monkeypox infections — identified by the World Health Organization in at...

Read full story
Some content from this outlet may be limited or behind a paywall.
See full media bias rating for Washington Post
From the Center
13268
Public Health
Biden: "Everybody should be concerned" about monkeypox spread
Axios 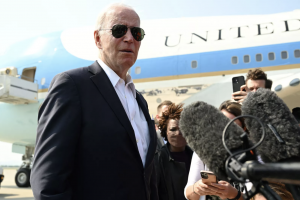 President Joe Biden on Sunday said that the recent spread of monkeypox in at least 12 countries are "something that everybody should be concerned about."

Why it matters: These are the president's first public remarks about the recent outbreaks, which include a confirmed case in Massachusetts, a person who tested positive in New York and roughly a half dozen other cases being monitored by the Centers for Disease Control and Prevention. 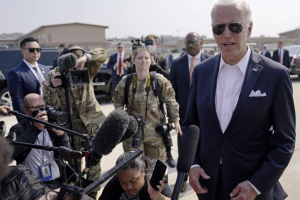 President Biden said the increasing spread of monkeypox, which has been detected in the United States and Europe, is something “to be concerned about.”

Biden was asked during a stop in South Korea on Sunday what his health advisers have been telling him about the disease that rarely spreads beyond Africa.

“They haven’t told me the level of exposure yet, but it is something that everybody should be concerned about,” he told reporters at Osan Air Base before boarding Air Force One for a flight to Japan.