Secretary of State Antony Blinken said Friday that Russia could invade Ukraine “at any time,” including during the Beijing Olympics.

Blinken has made similar statements before, however. National security adviser Jake Sullivan later clarified that current U.S. intelligence did not suggest Russian President Vladimir Putin had decided to invade, but that “he very well may give the final go order.” Sullivan also said the Biden administration was advising Americans to leave Ukraine “in the next 24 to 48 hours” because “the threat is now immediate enough that this is what prudence demands.” The statements came as over 130,000 Russian troops surrounded Ukraine and conducted military exercises. Ukrainian troops and civilians also continued to prepare for a potential invasion, and NATO troops performed military exercises in neighboring countries. U.S. officials recently predicted an invasion would displace millions and result in 25,000 to 50,000 civilian deaths, 5,000 to 25,000 Ukrainian military deaths and 3,000 to 10,000 Russian military deaths. Recent diplomatic talks between Putin and French President Emmanuel Macron resulted in mixed messages from French and Russian officials. On Friday, President Joe Biden traveled to Camp David and said he would speak with Putin by phone Saturday morning.

Coverage was prominently featured across the spectrum on Friday evening, shifting as the story developed. Some coverage focused primarily on the advisory for Americans to leave Ukraine, while other coverage focused on Biden's expected phone call with Putin. 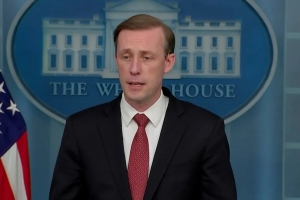 There is a “distinct possibility” that Russia will invade Ukraine in a “very swift time frame,” White House national security adviser Jake Sullivan warned Friday, as he urged all Americans in Ukraine to “leave as soon as possible … in any event, within the next 24 to 48 hours.”

“There will be no opportunity to leave and no prospect of a U.S. military evacuation in the event of a rush invasion,” Sullivan said to reporters in the White House briefing room. An attack, he said, would “likely begin” with aerial bombing...

Read full story
Some content from this outlet may be limited or behind a paywall.
See full media bias rating for Washington Post
From the Center
7963
Russia
White House Warns Russian Invasion of Ukraine Could be Imminent
Foreign Policy 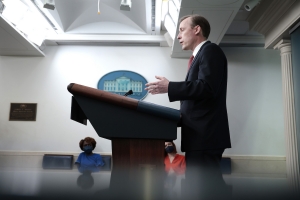 Russia could begin another invasion of Ukraine starting with deadly air and missile salvos before the end of the Beijing Winter Olympics next week, the top U.S. national security official said on Friday. 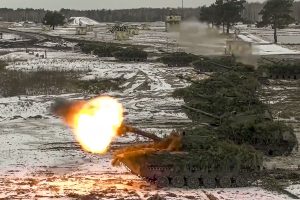 Russia continues to send military forces to its border with Ukraine, Secretary of State Antony Blinken warned Friday, reiterating that an attack could take place at any time — including during the ongoing Winter Olympics.

“Simply put, we continue to see very troubling signs of Russian escalation, including new forces arriving at the Ukrainian border,” Blinken told reporters during a news conference in Melbourne following meetings with his counterparts from Australia, India and Japan.