Gordon Sondland, the U.S. Ambassador to the European Union, testified this morning that there was a "clear quid pro quo" for a White House meeting between President Trump and Ukraine President Volodymyr Zelensky.

Sondland also maintained that he did not have direct evidence that those conditions were directly tied to critical security aid.

From the Left
306
US House
Read: Gordon Sondland’s opening statement for the impeachment hearing
Vox 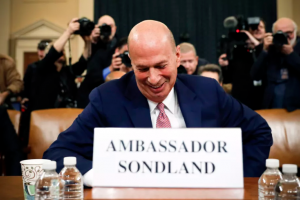 Gordon Sondland, the US ambassador to the European Union, is testifying to the House Intelligence Committee Wednesday morning in the highest-stakes impeachment hearing yet — and his opening statement has now been released.

In it, Sondland confirms that there was a “quid pro quo” imposed on Ukraine, and says that he was carrying out the “orders” of President Donald Trump.

Sondland faced intense criticism for omissions and purported failures of recollection in his October closed-door testimony, and he already submitted an “addendum” to...

U.S. Ambassador to the European Union Gordon Sondland confirmed Wednesday the existence of a "quid pro quo" in which military aid to Ukraine was tied to President Donald Trump's call for an investigation of his political rival, Joe Biden.

Sondland, testifying on Capitol Hill in the Trump impeachment inquiry, said he was acting on Trump's orders in his actions with regard to Ukraine.

He said, "At all times, I was acting in good faith. As a presidential appointee, I followed the directions of the President."

Read full story
See full media bias rating for USA TODAY
From the Right
306
US House
Sondland: 'Was there a quid pro quo? The answer is yes'
Washington Examiner

But Sondland, a pivotal witness in the House impeachment investigation, maintained he did not have direct evidence those conditions were directly tied to critical security aid.

Sondland, in his prepared remarks to the House Intelligence Committee, said that conditions were set for the Ukrainian president to be granted a phone call and meeting with Trump.

The Flip Side
US House

WASHINGTON (AP) — The government’s top infectious disease expert said Tuesday he is cautiously optimistic that there will be a COVID-19 vaccine by the end of...

House Democrats on Monday proposed slashing funding for ICE and the Border Patrol, including cutting detention space for people awaiting deportation down to...

President Trump never ordered his coronavirus task force to slow down testing for the pathogen, key members told Congress on Tuesday. “None of us have ever...

Top congressional Democrats are citing the ouster of the U.S. attorney for the Southern District of New York following a Friday-night standoff in calls for new...