All 3 Men Found Guilty of Murder in Ahmaud Arbery Case

All three men charged with the killing of Ahmaud Arbery were found guilty of murder on Wednesday.

The men — Travis McMichael, his father Gregory McMichael and their neighbor William Bryan — were also all found guilty of aggravated assault, false imprisonment, and criminally attempting to commit false imprisonment. The news prompted reactions from demonstrators outside the courthouse, as well as from national political figures like President Joe Biden. Arbery’s mother, Wanda Cooper-Jones, said she “never thought this day would come,” adding, “He will now rest in peace.”

Coverage was prominently featured at the top of homepages across the spectrum on Wednesday. Except for some right-rated outlets, most outlets across the spectrum described Arbery as “a 25-year-old unarmed black man” and mentioned that the men who killed him were white. Some outlets took it a step further by including the defendants’ race in headlines. 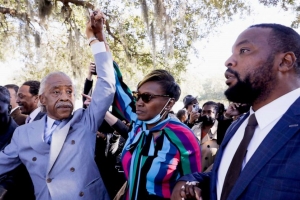 A Georgia jury convicted three white men of murder on Wednesday in the death of Ahmaud Arbery, 21 months after the 25-year-old Black man was chased down and shot to death while out for a Sunday jog. 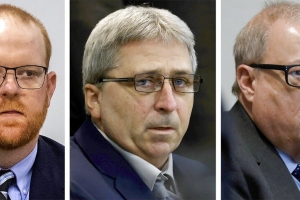 Three white Georgia men all face life in prison after being found guilty on Wednesday of chasing down and murdering Ahmaud Arbery , a 25-year-old black man.

Their lawyers argued self-defense, while prosecutors claimed Greg and Travis McMichael and their neighbor William "Roddie" Bryan chased down and killed Arbery near the port city of Brunswick because of his race.

Read full story
Some content from this outlet may be limited or behind a paywall.
See full media bias rating for Washington Examiner
From the Center
10056
Race and Racism
All 3 men in Arbery killing found guilty of murder
The Hill

A Georgia jury on Wednesday found three white men charged in the death of Ahmaud Arbery guilty of multiple counts of murder.

The jury found Travis McMichael, 35, who fatally shot Arbery on Feb. 23, 2020, in a Brunswick, Ga., neighborhood, guilty of all nine counts brought against him, including malice murder.

His father, Gregory McMichael, 65, who was with him at the time of the shooting, was found guilty of four counts of felony murder, two counts of aggravated assault, one count of false imprisonment and one count of criminal attempt to commit a felony.

News
Biden says the January 6 insurrection was 'about white supremacy,' and that hate doesn't go away, 'it only hides'
Insider