House Minority Leader Kevin McCarthy (R-Calif.) indicated that a Republican-controlled Congress might scale back support for Ukraine’s military and civilian population in the ongoing war with Russia, which invaded Ukraine in February. McCarthy voiced support for Ukraine, but called for increased oversight and scrutiny of aid packages, pointing to financial problems faced domestically by American taxpayers.

Key Quotes: McCarthy stated that “I think people are gonna be sitting in a recession and they’re not going to write a blank check to Ukraine. They just won’t do it,” later adding, “It’s not a free blank check. And then there’s the things [Biden] is not doing domestically. Not doing the border and people begin to weigh that. Ukraine is important, but at the same time it can’t be the only thing they do and it can’t be a blank check.” Rep. Liz Cheney (R-WY) called McCarthy’s comments “disgraceful” and added, “I don't know that I can say I was surprised.”

For Context: Should the Republican Party gain a majority in Congress, McCarthy is expected to be voted Majority Leader. A $12.3 billion additional aid package for Ukraine was part of last month’s government spending bill. The statements come as the war in Ukraine escalates among a string of victories for the Ukrainian military and increasingly nuclear rhetoric from Russian President Vladimir Putin.

How the Media Covered it: Outlets across the spectrum honed in on the “blank check” statement. The Hill categorized opposition to Ukraine support as “America First” ideology. 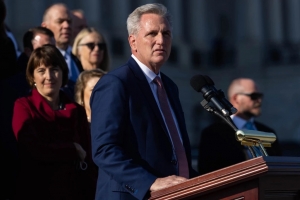 While iterating his longstanding support for Ukraine, McCarthy argued that many Republicans in the House have been rankled by the lack of focus on domestic matters, such as raging inflation, and will likely question the prudence of high-dollar donations to a country half a world away.

“I think people are gonna be sitting in a recession and they’re not going to write a blank check... 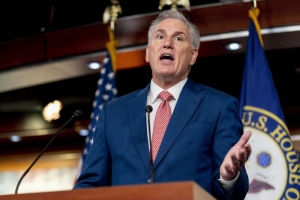 House GOP leader Kevin McCarthy warned Tuesday that Republicans will not write a “blank check” for Ukraine if they win back the House majority, reflecting his party’s growing skepticism about financial support for Kyiv as it battles Russia’s invasion.

“I think people are gonna be sitting in a recession and they’re not going to write a blank check to Ukraine,” McCarthy told Punchbowl News. “They just won’t do it. … It’s not a free blank check.”

The comments from McCarthy, who is in line to become speaker if Republicans win...

House Minority Leader Kevin McCarthy (R-Calif.) said that House Republicans will not write “a blank check” to Ukraine if they take control of the lower chamber next year, marking one of the clearest signs that aid to the war-torn country fighting off a Russian invasion will face a much tougher road in a GOP-led House.

“I think people are gonna be sitting in a recession and they’re not going to write a blank check to Ukraine. They just won’t do it,” McCarthy, who hopes to become Speaker if Republicans win...