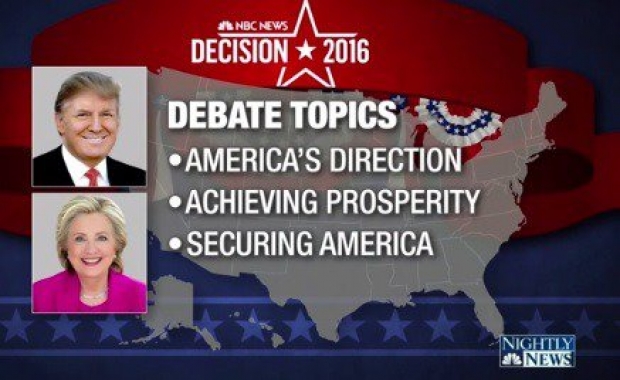 The first presidential debate of the 2016 election took place Monday night at Hofstra University between Hillary Clinton and Donald Trump. Gary Johnson and Dr. Jill Stein didn't receive the needed 15% support in national polls to participate. As usual, the political spin was out there after the debate, both from the campaigns and the media. With over a month, and two more presidential debates to go, it is unclear what impact this debate will have on election day, but it certainly was the center of all the buzz this week. Here we present some of the spin.
It has also been an exciting week for AllSides. Entrepreneur just published this 2 minute video about how AllSides helps find common ground - a concise clip about what we do and why it matters.
Following our recent AllSides for Schools announcement, Education Week wrote this overview describing our school program - please share with teachers and parents of middle-high school students. We also had a 30-minute NPR interview on bringing civil conversations to the classroomand just released our school lesson plan for civil rights and race which was included in yesterday's "The Politics of US: Race" series by the Christian Science Monitor.
See other news featured by AllSides such as Fact Check 1st Debate, Gloating, Taunts and Complaints, Congress Overrides Obama and the latest AllSides News.
Snippets from the Right
OPINION: The real reason why Trump won the debate
Monica Crowley, Washington Times
"At the same time, Mr. Trump was aggressive, projecting authority even when he was on relatively shaky ground. Unlike others who have opposed [Clinton], he didn’t care that she was a Clinton or a Democrat or a woman. He didn’t defer to her, offer special treatment or allow her a wide berth for Clintonian parsing.
Relishing his outsider role, he positioned her squarely in her role of status quo incumbent. By doing so and by clearing the bar of appearing a reasonable man and plausible president, he lived to fight another day.
Because he’s never done this before, voters give him a lot more running room to make mistakes and find his bearings."
Snippets from the Left
OPINION: Republicans in Denial That the Debate Exposed Donald Trump As Unfit for Office
Jonathan Chait, New York Magazine
"If you’re a Republican who has been clinging to the wan hope that Donald Trump might somehow, in his eighth decade on Earth, develop into a plausibly competent president of the United States, the first debate should have been your moment to abandon ship. Trump displayed the factual command of a small child, the emotional stability of a hormonal teen, and the stamina of an old man, staggering and losing the thread as the 90 minutes wore on. Instead, Republicans — without a single exception I have seen — have responded very differently. They have treated their candidate’s glaring unsuitability for high office as, at worst, a handful of discrete errors that in no way reflect on his character, and at best, the dastardly unfairness of the liberal media."
Snippets from the Center
These 33 quotes tell you everything you need to know about the first presidential debate
Business Insider
"Following the Monday affair, both Donald Trump's and Hillary Clinton's backers and surrogates provided plenty of thoughts on the contest, which polls from CNN and Politico/Morning Consult showed viewers believed the former secretary of state won handily.
Those tasked with representing their respective candidates in the spin room following the titanic debate set the agenda for the presidential discussion.
...'He needs to shorten his answers to be a little more succinct on tax policy or other things. He was having a conversation. But in that format, I think if he could be a little tighter, when he talked about the tax code, and making sure that people have more money left at the end of the year, it could be said in a lot fewer words than he said it. He meandered tonight.' — Rep. Chris Collins of New York, a backer of Donald Trump, on how the Manhattan billionaire can improve his debate performance."
Discover more on this topic on AllSides.
News, Story Of The Week, Hillary Clinton, Donald Trump, Debate