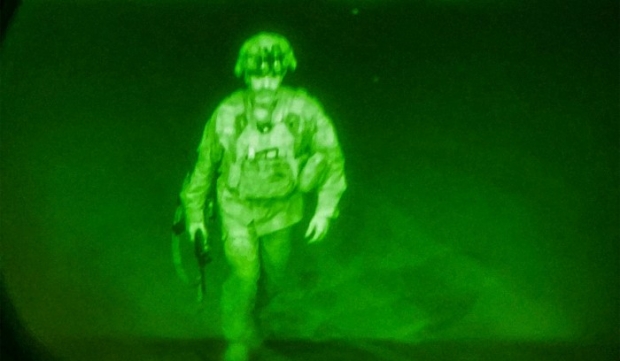 See more of our coverage on the Afghanistan situation:

Media outlets across the spectrum were hyper-focused on Afghanistan, as they have been for the past several weeks. Coverage on all sides highlighted the final evacuations, the official end of the U.S. war effort, and the people who were left behind. Right-rated voices were especially critical of Biden's handling of the evacuations; voices across the spectrum expressed concern that the Americans and people who helped the U.S. military who are still in Afghanistan face violent Taliban retribution.

"During an Aug. 20 press conference, Biden said: 'I have seen no question of our credibility from our allies around the world. Matter of fact, the exact opposite I’ve got.' But leaders from one of the most reliable U.S. allies have been outspoken. 'When the United States decides emphatically to withdraw in a way that they have, clearly we’re going to have to manage the consequences,' British Prime Minister Boris Johnson said."

Leaving Afghanistan — and Leaving Americans Behind

"Why risk the living for the dead? The answer is as simple as it is profound. Because the dead were Americans, and we don’t leave Americans behind. Ever. Except in Afghanistan, we just did. Between one and two hundred Americans are believed to still be in Afghanistan. Americans whose survival and repatriation is now dependent on the Taliban’s benevolence."

U.S. official: 'Majority' of Afghan allies who applied for special visas left behind in Afghanistan

"A senior State Department official said Wednesday that it appeared a “majority” of Afghans who had worked for the U.S. military and applied for Special Immigrant Visas (SIVs) had not been successfully evacuated and remained in Afghanistan...The senior State Department official described a harrowing atmosphere during the evacuation, with officials forced to make snap decisions affecting the fate of Afghans desperately trying to flee Taliban rule."

"...even in the midst of the worst stretch of the Biden presidency thus far, the lure of misinformation has proved irresistible to its GOP critics. They’ve trafficked repeatedly in recent days in false, misleading or unproved allegations involving the Taliban hanging someone from an American helicopter, President Biden skipping a ceremony for 13 Americans killed last week, military dogs being left behind, and $80 billion in military equipment being left for use by the Taliban."

Victorious Taliban says defeat of U.S. is a lesson to the world

"The Taliban has insisted it has evolved towards a more moderate platform, but reports of fighters hunting for Afghans who worked with U.S. forces and working women being asked to stay home have raised fears over a potential resurgence of the group's brutal rule in the 1990s. Shortly after the Taliban took Kabul on August 15, the capital's airport experienced harrowing and chaotic scenes as Afghans desperately sought to flee the country, with many clinging onto departing aircraft."

"With the Taliban now in control of Afghanistan, most Americans believe the situation in that country poses a security threat to the U.S., with 46% saying Taliban control represents a major threat and another 44% saying it is a minor threat. Republicans (61%) are far more likely than Democrats (33%) to view a Taliban-controlled Afghanistan as a major security threat."