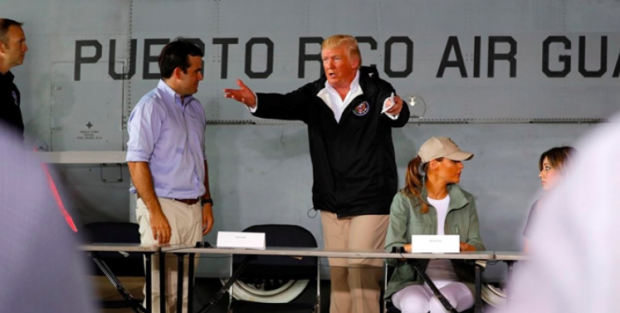 This morning, President Trump tweeted that the United States "cannot keep FEMA, the Military & the First Responders, who have been amazing (under the most difficult circumstances) in P.R. forever!" Many news outlets took this to mean that he will soon pull out of the U.S. territory. Earlier in the week, the Department of Homeland Security announced that the administration would let the Jones Act waiver expire, meaning foreign ships from U.S. ports will no longer be able to send aid to the island. He has placed much of the blame on Puerto Rico's previous economic condition and current leadership, highlighting that prior to Hurricane Maria, Puerto Rico had a debt of more than 70 billion dollars.
Other news from AllSides:
Snippets from the Right
Trump on Puerto Rico Recovery: FEMA, Military Can't Stay Forever
Townhall
"While President Trump has been supportive of Puerto Rico in the aftermath of Hurricanes Irma and Maria, which devastated the island—he has not shied away from criticizing their dire economic situation.
...
'A total lack of accountability say the Governor. Electric and all infrastructure was disaster before hurricanes. Congress to decide how much to spend,” he wrote. “We cannot keep FEMA, the Military & the First Responders, who have been amazing (under the most difficult circumstances) in P.R. forever!'
...
To make matters worse, Puerto Rico’s financial state was terrible to begin with, as Trump explained. The island has been in a recession for 11 years and in 'in May, it filed the largest municipal bankruptcy in U.S. history,' CNN Money reports."
Snippets from the Center
Trump: FEMA can't stay in Puerto Rico forever
The Hill
"President Trump on Thursday warned that this administration's response to hurricane-ravaged Puerto Rico cannot last 'forever.'
...
He added that the island territory's existing debt and infrastructure issues compounded problems.
His tweets come at a time when only about 10 percent of the island's 3.4 million residents have electricity, Puerto Rico's government said Tuesday. Guaynabo, a city the president and first lady Melania Trump visited, is also reportedly still without power. 'Flashlights, you don’t need them anymore. You don’t need them anymore,' the president said as he passed them out to city residents. He also tossed paper towels into the crowd of people gathered around him during the visit.
The Trump administration faced criticism for its initial response as Puerto Rican lawmakers begged him to help deal with the scarcity of basic necessities like food and clean water."
Snippets from the Left
FEMA Will Be Helping Texas for Years. So Why Does Trump Have a Different Standard for Puerto Rico?
Mother Jones
"Nearly two months after Hurricane Harvey dropped more than four feet of rain in the southeast region of the state, the Federal Emergency Management Authority still has a heavy presence in Texas.
Contrast this with the situation for the American citizens in Puerto Rico. On Thursday morning Donald Trump threatened to withdraw FEMA and military officials from the hurricane-ravaged island, citing its longstanding infrastructure and financial issues. But it’s been only three weeks since Hurricane Maria made landfall as a strong Category 4 storm, and already Trump has tweeted his intention to walk away.
...
Shortly after Trump’s tweets threatening to end aid for Puerto Rico, Mayor Yulín Cruz issued a statement: 'You seem to want to disregard the moral imperative that your administration has been unable to fulfill,' she said. 'Help us. Without robust and consistent help, we will die.'
Discover more on this topic on AllSides.
News, Story of the Week, Puerto Rico, Disaster, FEMA, Donald Trump