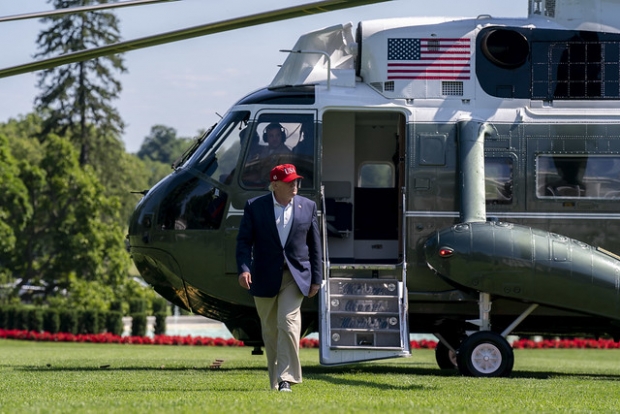 President Donald Trump said he canceled previously secret negotiations with Taliban leaders after the group claimed a bombing that killed 12, including a U.S. service member, in Kabul last week.

Most reporting focused primarily on fallout from the cancellation and a recap of recent Trump-Taliban negotiations. Many voices acknowledged bipartisan disapproval of the proposed talks.

Some critics of Trump chastised him for planning negotiations with a terrorist group at a presidential retreat, particularly during the week of 9/11. Some supporters argued despite the cancellation, negotiating with enemies was admirable.

Check out some other big stories this week: GOP to cancel Presidential primaries in four states, John Bolton out as National Security Adviser, and President Trump considering regulation on vape flavors.

Illegal ballot harvesting caused a do-over House election in North Carolina. What are the pros and cons of the practice?

"The scheduled meeting had been part of a year-long negotiations effort between the U.S. and Taliban in an attempt to begin the withdrawal of U.S. troops from Afghanistan."

""Trump blamed the fall-out on a recent Taliban car bomb attack in Kabul, tweeting: “If they cannot agree to a ceasefire during these very important peace talks, and would even kill 12 innocent people, then they probably don’t have the power to negotiate a meaningful agreement anyway.”"

"Trump drew fire from lawmakers, including Rep. Liz Cheney, R-Wyoming, who expressed outrage over the idea of granting the Taliban the prestige of a meeting at the presidential retreat, especially so close to the anniversary of the 9/11 attacks."

"Trump defended the move this week. "Camp David's held meetings with a lot of people that would have been perceived as being pretty tough customers," Trump told reporters at the White House on Monday. "There have been plenty of so-called bad people brought up to Camp David for meetings.""

"Citing a Taliban attack in Kabul last week in which 12 people, including a US soldier, were killed as the reason, Trump also cancelled the US-Taliban negotiations ongoing in Qatar for nearly a year."

"Following Trump's announcement, the Afghan president's office said that "real peace" would only be possible if the Taliban stopped launching attacks and held direct talks with the government. The Taliban has long refused to engage with the Afghan government, calling it a "puppet regime" of the West with "no real power"."

"“They’re dead so far as I’m concerned,” Trump told reporters on the South Lawn of the White House. “They thought that to kill people in order to put themselves in a little better negotiating position when they did that they killed 12 people … And you can’t do that can’t do that with me. So they’re dead as far as I’m concerned. And we’ve hit the Taliban harder at the last four days than they’ve been in over 10 years.”"

"The Taliban issued a statement saying an agreement had been “finalised” and that talks had ended in “a good atmosphere” but the deal had been sabotaged by Trump."

"The comments from Reps. Michael Waltz of Florida and Adam Kinzinger of Illinois come one day after Trump tweeted that he invited Taliban leaders to Camp David for secret peace talks this weekend but canceled the meeting after the Taliban took credit for an attack in Kabul that killed a dozen people, including an American soldier. Trump has long sought to withdraw the US from its longest war, but his revelation on Saturday night that he was considering holding talks with the Taliban at Camp David -- a storied retreat where presidents have famously secured peace accords -- was striking, especially coming so close to the anniversary of the 9/11 attacks."

Trump canceled his secret meeting with the Taliban. The negotiations were in trouble anyway.

"The motives behind Trump’s decision are unclear. His tweets, for example, raise the concern that the Taliban may not be cohesive enough to honor a peace agreement. By this logic, the violence of the past week — including three new offensives in Kunduz, Baghlan and Farah provinces; a massive suicide bombing in Kabul; and the beheading of human rights commissioner Abdul Samad Amiri — are the work of various factions. This belief is probably a mistaken one; while there are differences of opinion among senior leaders, the Taliban remains a remarkably cohesive fighting force. There are also divisions within the Trump administration about the merits of Khalilzad’s tentative agreement, and whether too much was given to the Taliban in return for too little."

"Trump called off a secret meeting with Taliban leaders and representatives of the Afghanistan government, which had been planned for Sunday at Camp David, after the Taliban claimed its members carried out a suicide bombing in Kabul that killed twelve people, including a U.S. soldier. Critics had called the plan to meet for peace negotiations days before the 18th anniversary of the 9/11 terrorist attacks disrespectful."

"“We’re going to walk away from a deal if others try to use violence to achieve better ends in the negotiations,” Secretary of State Mike Pompeo said Sunday of the canceled meeting. “It’s not right. It’s not appropriate. It killed an American. And it made no sense for the Taliban to be rewarded for that kind of bad behavior.”"

"Asked [Monday] about the way ahead, Trump didn’t have a clear answer. “We beat them militarily, but as soon as we leave, it seems to form again. We would beat them very easily militarily if we wanted to by doing certain things, and I'm not talking nuclear,” he said “We could have that over with very, very rapidly, but you'd lose millions and millions of lives, and I don't want to do that.”"

"Meanwhile, four former national security professionals, including two retired generals, have penned an open letter to Trump advocating a new approach for securing Afghanistan, which they say is based on a “special operations model” and would dramatically lower the U.S. footprint in the country."

In walking away from Taliban deal, Trump showed wisdom Obama never had

"Negotiating with the Taliban is a bitter pill for Americans to swallow. These brutal Islamist killers have the blood of nearly 2,000 Americans on their hands, as well as that of countless numbers of Afghans. But after nearly 18 years of a stalemated war and a doomed effort to democratize Afghanistan, the administration was obligated to seek an alternative."

"There’s more to achieving America’s objectives or ending a war where the other side intends to go on fighting than signing a piece of paper. President Trump’s pull-back from the brink of repeating Obama’s mistakes may strike Democrats as undignified, but it is far better than sticking with a deal that would have been a humiliating defeat for US interests."