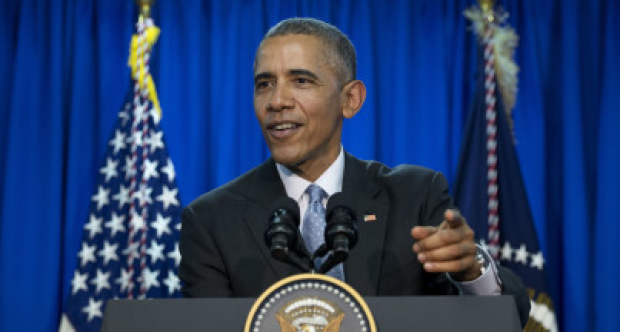 Today, at the G7 summit in Japan, President Obama made some comments about Donald Trump, who just clinched the GOP nomination thanks to the pledged support of 29 more Republican delegates. Was Obama irresponsible in sharing his Trump viewpoint with the world community or was he simply stating appropriate facts? Today we bring you a view into this story from three different sides of the media.
See other news featured by AllSides such as A Bernie/Trump Debate?, Trump Clinches Nomination, Will Debbie Be Dropped? and the latest AllSides News.
Snippets from the Right
Obama Takes Swipe at Trump Overseas
Fox News
“’In business, when you rattle someone, that's good,’ Trump said. ‘If they're rattled, in a friendly way, that's a good thing ... not a bad thing.’
…‘When the president of the United States goes overseas he’s representing the country,’ Josh Holmes, former chief of staff to Senate Majority Leader Mitch McConnell, said on Fox News. ‘It is remarkably irresponsible and remarkably unpresidential for him to weigh in on a domestic political battle and effectively undermine one of the candidates who could replace him next January.’
‘In front of the world community and effectively in front of all the world leaders, saying someone is essentially unfit for office is an incredibly irresponsible move for the president of the United States,’ Holmes said.”
Snippets from the Left Leaning
Obama: Trump More Interested In ‘Tweets And Headlines’ Than Keeping America Safe
Huffington Post
“‘A lot of the proposals that [Trump has] made display either ignorance of world affairs or a cavalier attitude, or an interest in getting tweets and headlines instead of actually thinking through what is required to keep America safe,’ Obama said.
He spoke earlier in the presser about the importance of maintaining stability in Asia, particularly when it comes to North Korea’s threats to build nuclear weapons. North Korea has already distanced itself from Trump, saying that his offer to meet with Supreme Leader Kim Jong Un is ‘useless.’
Syrian refugees are also expected to be on the agenda at this year’s meeting of the Group of Seven. While Canada, France, Germany, Italy, Japan, the United Kingdom, and the United States discuss ways they can help alleviate the ongoing crisis, Trump has warned that refugees could carry out another 9/11-style attack and told Syrian children that ’you can’t come here.’”
Snippets from the Center
Obama: World leaders 'rattled' by Trump
Politico
“At the news conference, Obama didn’t go into a detailed critique of Trump, but he said he shares the anxiety of world leaders about a potential Trump presidency.
‘Things don’t roll together so well if the United States is not making good decisions,’ Obama said.
Responding to those comments on CNN's ‘New Day,’ Trump national spokeswoman Katrina Pierson remarked that she understood the leaders are ‘rattled, because the gravy train ends if Mr. Trump becomes president.’
‘There are several problems we have inside our country that needs to be addressed,’ Pierson said. ‘Meanwhile, we have trade deficits, we’re spending hundreds of billions of dollars in defense for countries [that are] using that money essentially for socialism.’”
Discover more on this topic on AllSides.
News, Barack Obama, Donald Trump, World