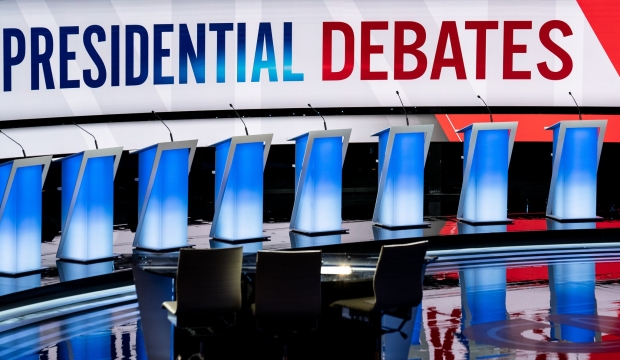 Detroit played host to the second round of 2020 Democratic presidential debates on Tuesday and Wednesday, in a combative showing that outlined key differences in policy priorities and ideologies among the 20 candidates.

On both nights, candidates sparred over topics ranging from immigration and healthcare to climate change and criminal justice reform. Some criticized each other for citing "Republican talking points;" others railed former Vice President Joe Biden on Night 2, questioning his Obama-era stances on Medicare and the southern border.

Biden was the most discussed candidate in the media, but with different narratives; some wrote that he withstood attacks well, others reported that he was over matched.

Check out some other big stories this week: Trump, Guatemala reach asylum agreement, 3 Killed And 15 Injured In Shooting At California Garlic Festival, and Federal Reserve To Cut Interest Rates For The First Time In 10 Years.

The debates also revealed possible signs of media bias. AllSides tracked how many questions each candidate was asked. See who fielded the most on each night.

"The broader struggle between moderates and progressives spanned both nights of debates and reflects a deep split within about not just the character of the party, but also about the best approach for beating President Trump. Many of the party’s progressive activists remain angry that an establishment figure—Hillary Clinton—won the nomination four years ago and then lost to Mr. Trump, who is deeply despised on the left."

"Mr. Biden and other moderates are asking, essentially, whether those big price tags won’t drive some middle-of-the-road voters back into Mr. Trump’s arms."

"While his rivals saber-rattled for “Medicare for All,” which would scrap Obama’s signature health care law, Biden called for a more modest public option that would build on the Affordable Care Act. When former Obama Housing Secretary Julián Castro criticized the high number of deportations under Obama, Biden retorted that Castro’s passion about the issue appeared newfound."

"Booker needed a good debate to breathe new life into his flagging campaign. He largely succeeded. The New Jersey senator avoided getting into nitty-gritty policy fights. But he came armed with zingers, talked about big issues and delivered many of the night’s most memorable lines — often at Biden’s expense."

5 things we learned from the Detroit Democratic debates

"Biden at times looked like a deer-in-the-headlights at the Miami debate last month, coming under blistering attack by Sen. Kamala Harris for his past opposition to federally-mandated school busing and his relationship with two segregationist lawmakers he served with in the Senate. The former vice president and leader in Democratic polls made it clear from the get-go in Detroit that this time he understood it was going to be a knife fight."

"Former president [Obama]'s legacy is a badge of honor for many, but has also seen criticism from some wings of the left, and could be a continuing talking point as the campaign rolls on."

Only 7 Candidates Have Qualified for the Next Democratic Debate

"The Democratic National Committee has set stricter criteria for the third set of debates, which will be held on Sept. 12 and Sept. 13 in Houston. If 10 or fewer candidates qualify, the debate will take place on only one night."

"The former housing secretary Julián Castro and the entrepreneur Andrew Yang have surpassed 130,000 donations and each have three of the four qualifying polls they need, while Senator Amy Klobuchar of Minnesota has met the polling threshold and has about 120,000 donors."

Democrats Made Lots of Claims During the Second Debates. Here Are the Facts.

"While the data on exactly how many Americans live paycheck-to-paycheck isn’t exact, a 2018 Federal Reserve report found that four in 10 adults said would not be able to cover a surprise expense of $400 without going into debt or selling something. And a 2017 poll of more than 5,800 workers, hiring managers and human resources professionals from Career Builder found that 78% of Americans live paycheck-to-paycheck."

'How CNN Botched Both Democratic Debates

"Sometimes, when one candidate actually had criticized another’s policies, it was clear why the former should be asked to respond, as in the health care portion. But more often, the moderators would just randomly invite Candidate Y to respond to Candidate X’s statements without setting up why they thought Candidate Y’s perspective would be valuable."

"On Tuesday, CNN fixated on knocking down those pesky progressives by directing politically hostile questions to the night’s front-runners while showing bizarre deference to the least relevant candidate on stage. On Wednesday, CNN stepped back and let the candidates squabble—and left viewers with barely any takeaway at all."

2020 Dems Attack Biden for Deportations Under Obama: ‘You Can’t Have it Both Ways’

"President Obama, who was nicknamed the “deporter-in-chief” in 2012 by immigration rights advocates, deported or removed over 5 million undocumented immigrants, fewer than the Clinton and Bush administrations did but more than the Trump administration has."

"New Jersey senator Cory Booker then added his voice to the critics, calling Biden out for invoking his former running mate only when it served his purposes. "You can’t have it both ways,” Booker said. “You invoke President Obama more than anyone in this campaign; you can’t do it when it’s convenient and then dodge it when it’s not.""

Medicare for All Is Defining the 2020 Democratic Race

"In last night's Democratic primary debate, which featured a full half-hour segment focused on health care—which was introduced as "the number-one issue for Democratic voters"—[Obamacare] was virtually absent. Instead, the evening's leading contenders extensively defended Medicare for All, a single-payer plan that captured elements of both the extremes Obama said he wanted to avoid."

"Somehow, in the space of 10 years, Democrats have drifted away from Obama's performative centrism, his (at least rhetorical) sense that what Americans want is a middle way, an anti-radical solution rather than the "big structural change" that Warren insists is needed. Medicare for All, and all the troublesome questions it raises, is defining the 2020 Democratic race—and the Democratic Party with it."

"Yes, healthcare helped Democrats win the House in 2018 and remains important today. But Trump was not on the ballot in 2018. He will be in 2020. To defeat him, Democrats need a nominee who is as big as he is. There might not be any such candidate in the Democratic field today, but if there is, he or she will not be identified by an exploration of how many years it will take to transition to "Medicare for all.""

"The next debate is scheduled for September in Houston. Party rules will raise the bar for inclusion, which means the field will likely be dramatically smaller. There will be no more 20-candidate debates. But the liberal-centrist split, deepened after this week, will not go away."