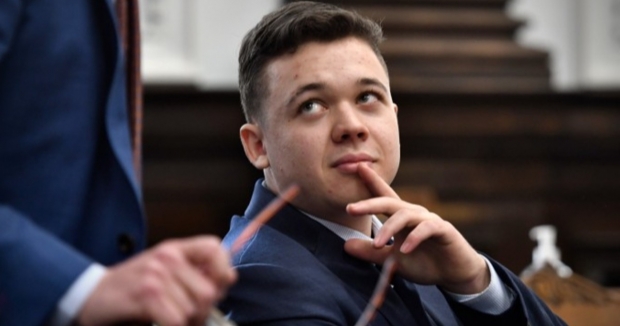 If judged by the amount of news coverage on it, the vast $1.2 trillion infrastructure bill signed into law Monday after months of partisan feuding is hardly a story this week compared to the trial of Kyle Rittenhouse.

President Joe Biden signed the bill into law during a bipartisan ceremony Monday. It is the largest infrastructure investment in U.S. history and will likely have transformative effects on transportation and the economy that are felt by every American.

But Rittenhouse, who was acquitted on all charges Friday, and his trial have dominated headlines across the spectrum for much of the week, and has tended to differ along partisan lines. The 18-year old faced several charges, including homicide, attempted homicide and recklessly endangering safety, from a night of chaos in Wisconsin last summer following a police shooting.

In recent days, many left-rated media outlets have often painted the judge and courtroom situation as biased. Meanwhile, right-rated sources often frame the prosecution's case as shaky and politically-charged. Some voices on the left accuse Rittenhouse of feigning remorse during the trial and say he represents an example of white supremacy and conservatives worshipping violence. Some on the right support Rittenhouse and call the left's framing unfair, and argue that demonizing Rittenhouse represents a bigger cultural issue than the purported inequality the left is focused on.

Due in large part to biased news media, stories that evoke negative emotion and disdain for the other side continue to take precedence over other subjects. Updated 11/19/21 at 1:49 p.m. with the Rittenhouse verdict.

Bracing for protests over racial justice and “stand your ground”
Axios

"America is bracing for a sequel to the protests ignited after George Floyd's murder, with the focus now less on police and more on the nation's broader criminal justice system and self-defense laws. Activists and law enforcement officials warn that two ongoing national trials have the ingredients to reignite racial tensions and public protests when verdicts are handed down."

Does Only 11 Percent of Bill Go Toward 'Real Infrastructure,' as Trump Claims?
Newsweek

"There is some room for debate around the specific—and evolving—definition of what constitutes "public infrastructure." But the 11 percent figure cited, without evidence or sources, by Trump as the share of the total allocated to "real infrastructure" is inaccurate."

"Rather than fixing this crisis, this bill instead uses it as an excuse to push a gigantic handout for special interests, radical left-wing activists, and unions. As a result, the money won’t be going where supply chains need it, but rather to irrelevant make-work projects that please activists and unions, such as subsidies for electric cars that have nothing to do with supply chains."

A Reality Check for Progressives on the Rittenhouse Case
Reason (opinion)

"In these and many other instances, there is not a white nationalist, or a vigilante, in sight. Just people, usually local residents, trying to protect their neighborhoods from chaos and destruction while the police stood down, usually on orders from superiors... the notion that only unhinged, violent, white nationalist vigilantes would take to the streets with arms during riots is just false."

"He defied critics, including the media, and turned out a truly popular, major piece of legislation. Unfortunately, the reconciliation package does not enjoy many of the advantages of the bipartisan, pro-American capitalism bill he just signed. And therein lies Biden’s ongoing struggle to pass the remainder of his economic agenda."

"Convicting Rittenhouse would just add to the tired old narrative that white conservatives are persecuted. I can already see the incoherent Donald Trump statement in my Twitter feed and working-class cosplayer Tucker Carlson frothing at the mouth during his nightly Fox News show... After all, if you can’t shoot protesters in the name of “protecting” businesses from violent Black people and their allies, who can you legitimately shoot?"