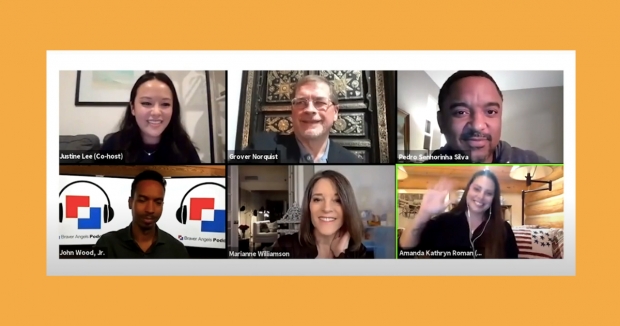 Last week, I witnessed a high profile Living Room Conversation that made me hopeful. Marianne Williamson, Grover Norquist, Pedro Silva, John Wood, Amanda Kathryn Roman and Justine Lee participated in a live stream conversation that warmed my heart. This group had notably diverse political views and yet they treated each other with respect, listened to each other with curiosity, and exposed a great deal of common ground around values.

This was the launch Moving Forward Together, an invitation for citizens around the country to have similar small, guided conversations to build a foundation for a future we can all be proud of.

"We must have new conversations because we need a new country" was something Marianne Williamson said that sticks with me.

And this comment by Grover Norquest left me musing about possibilities: "Listening is so important, finding out what someone fears and why. Because there is SO much agreement if you find out what your hopes are.”

Pastor Pedro Silva spoke to the personal challenge of being open to others. He said: "Cultivate space within yourself to make space for others to discover themselves.”

We have technology that allows people to have substantive conversations by video. People from around the country can talk about their hopes and values with the end goal of becoming better — better at solving the challenges we face, better at honoring the dignity of all people, better at being the people we want to be.

Joan Blades is co-founder of LivingRoomConversations.org and co-founder of AllSides for Schools. She is also a co-founder of MomsRising.org and the progressive activist group MoveOn.org. She has a Left bias.