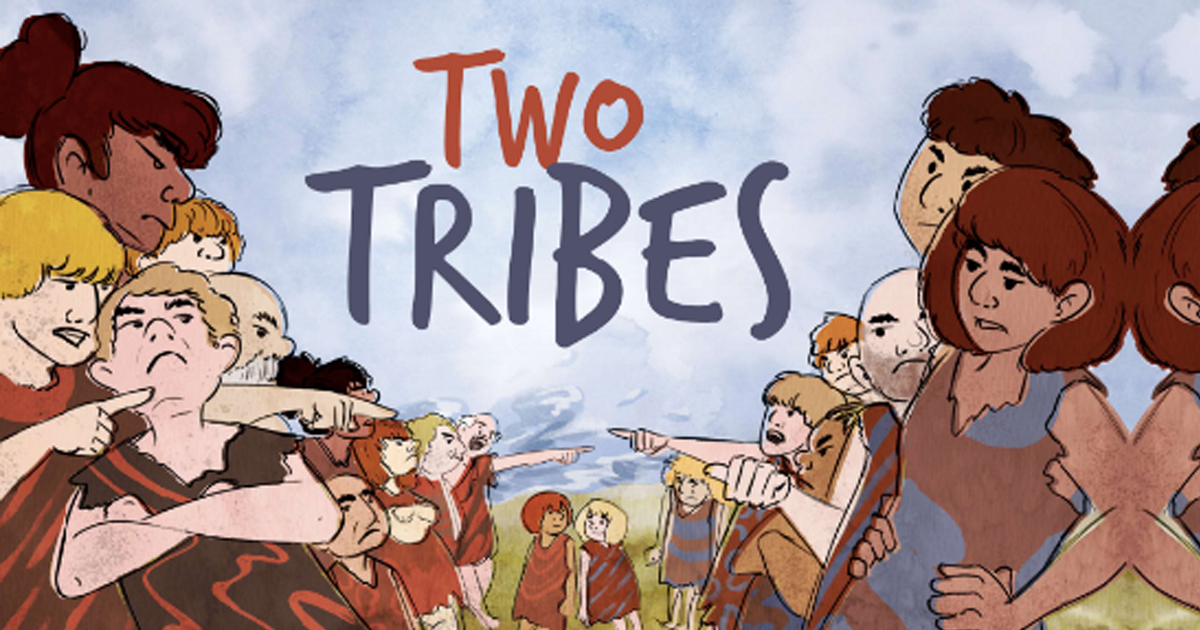 Earlier this summer, we wrote about a new children's book, Two Tribes, that exposes the dangers of political polarization and shows that solutions and compromises are both possible and necessary for humans to thrive and get along in peace.

Following a successful Kickstarter campaign, Two Tribes is now available to purchase. $1 for every copy sold will benefit our nonprofit, AllSides for Schools.

To celebrate the official launch, interviewed the book's author, Tyler Storlie, about what inspired him to write the book and how he thinks it might help Americans combat political polarization.

AllSides: What inspired you to write Two Tribes?
Tyler Storlie: I wrote the first draft of Two Tribes right after I had an argument with my father. I was visiting my parents for Christmas and my dad and I started talking about some political issue (I don't even remember what it was!). At first we sort of agreed with each other, but then, because of some small differences in opinion, we started to argue. We both thought we were right and so it became a shouting match where neither one of us was really listening - we were just trying to win the argument. By the end of it, neither of us was any wiser and we were both really frustrated. I felt terrible and that was my inspiration for the book. I thought we needed a better way to think about our political differences, and a short children's story seemed like a great format for this simple lesson.

AS: Do you see political polarization as an issue that has gotten worse in the U.S. in recent years, or stayed largely the same? How do you think Americans can overcome political differences?

TS: On the one hand, yes, I definitely think it has gotten worse in recent years. I don't remember it being this hostile 5 or 10 years ago. People will always disagree but too many people now see their disagreements as justification to hate and fear the other side, and those at the extremes seem to have too much control.

On the other hand, I have seen lots of improvement over the last year or two. Thanks to organizations like AllSides, RepresentUS, National Conversation Project, Better Angels, and many others, more people now realize that we have a polarization problem. These organizations do a great job of exposing the 'us vs. them' narrative and they do a great job of promoting humility and building bridges. I think that is the most important thing we can do to overcome our differences; we need to be humble and willing to admit that our side might be wrong or that another perspective isn't necessarily evil. That lowers defenses and allows for honest conversation. I think we need to make humility cool again, so to speak, or else neither side will be willing to give an inch to gain a mile. It sounds naive but I worry the alternative is an escalating power struggle between the left and right that won't end well.

AS: Why do you think it's important to illustrate the dangers of polarization to children at a young age?

TS:I think it is crucial that we give kids a framework for how to think about conflict early on. For children, Two Tribes isn't really about political polarization - it's about why we disagree with others and how to resolve conflict. In the same way that we first teach children basic math and the alphabet so that they can later learn calculus and read Shakespeare, we also need to provide a foundation for understanding complex concepts like political polarization, groupthink, and geopolitical conflict. If people are too slow to learn these concepts and what to do about them, then history is likely to repeat itself.

AS: Are there any other similar books about polarization catering to a young audience that you are aware of, or is Two Tribes a trailblazer in this arena?

TS: Dr. Seuss' The Sneetches has a similar theme, and I've been told, though I haven't read it, that The Pushcart War is a classic children's novel about escalating conflict. Other than that, I'm not aware of any new books that address polarization or group conflict for children. If you know of any, let me know!

AS: Is Two Tribes being used in any classrooms? What has the reaction from teachers, parents and students been like?

TS: Yes! A bunch of teachers have ordered Two Tribes for their classrooms and an awesome teacher named Angela Clare helped me develop a lesson plan to go along with the book. Teachers have been really thankful to find it, they've told me it's very difficult to teach government or civics to students in today's climate. They dread it. Even at an early age kids are picking up on polarizing messages from their parents and the media that make it difficult to have class discussions. Two Tribes is disarming and gives them a great starting point for talking about politics and current events.

And the parents I've talked to tell me their kids enjoyed it and understood the metaphor but then they usually say something like, "But I really wish every adult would read this!" A lot of people are gifting it to friends and relatives, with or without children.

AS: What do you hope young children take away from this book?

TS: As humans we sometimes have an instinct to fear people who are different from us, and to always believe we are right. History is full of examples of the problems this can cause. But the good news is that we can learn to get past these initial instincts and even to build bridges with those who might first appear to be our enemies. Two Tribes provides a framework for this. It can help kids understand why people disagree, how to resolve conflict, and how to see the bigger picture. Hopefully it sparks their interest in politics or the social sciences!

You can purchase Two Tribes here.