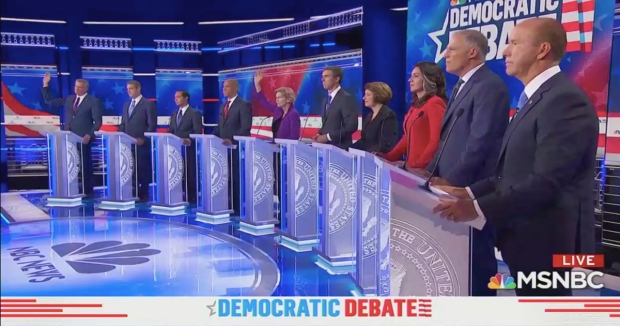 The first Democratic debate had Twitter ablaze on Wednesday and Thursday nights. Ten candidates debated on the first night, with the other 10 debating on night two. AllSides live tweeted the event, and conducted a number of polls to see how our followers felt about some key issues.

Let’s start with a caveat: Twitter polls are insanely unreliable! They can be manipulated by motivated or partisan individuals and groups. While we take these results with a grain of salt, we also found it interesting to get a temperature check on our followers’ beliefs. 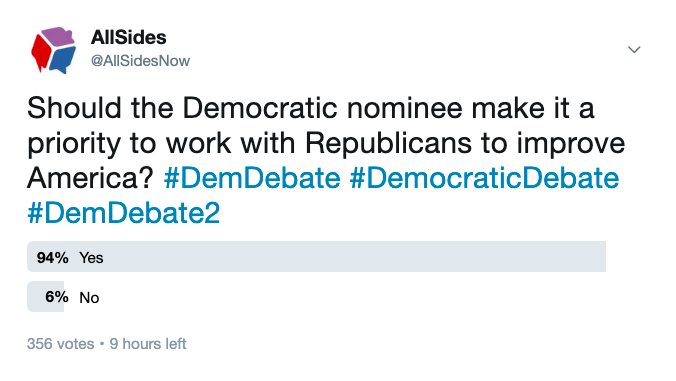 Since we’re an organization devoted to bridging divides and civil dialogue, it makes sense that our followers have a bias toward understanding the other side so we can get the job done. These results aren't that surprising — yet the 94% figure is even stronger than what we would have expected.

The AllSides.com audience is made roughly equally of those from the left, center and right. When we last measured, our Twitter audience seemed to tilt a bit left, but we’ve gained thousands of followers since then and need to do another assessment. 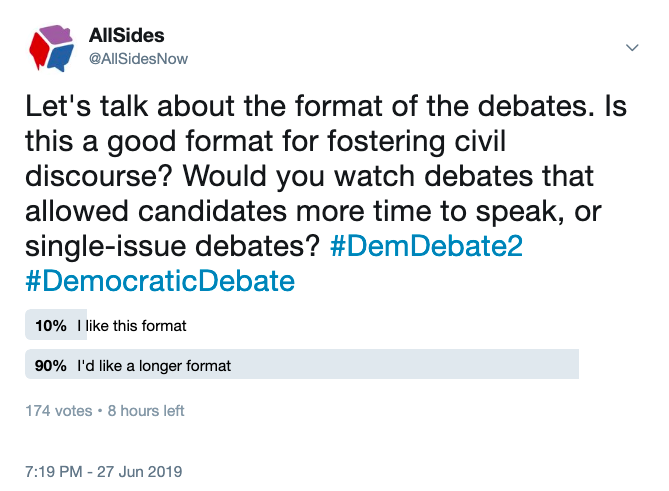 Our audience is very politically engaged — 45% of our site visitors consider themselves to be news junkies and primarily access our site to read the news (68%), so the fact that the majority of those who participated in the poll would like a longer debate format wasn’t too surprising either.

However, this contradicts a poll we conducted on Facebook in April in which 70% of our followers said they prefer short-form content when consuming news media about politics, such as quick reads, short videos and clips that give perspectives and information quickly. Seems like this debate was keeping people’s attention and had them wanting more. 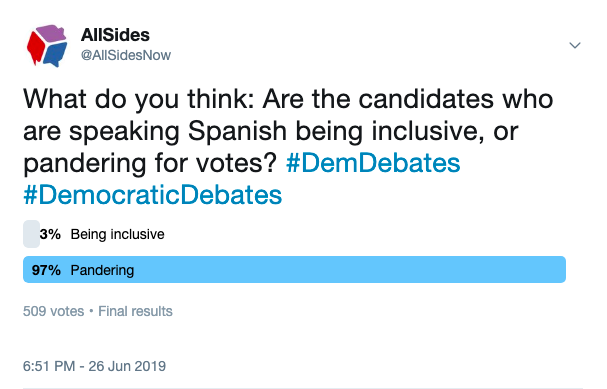 During the first night, there was a great deal of Spanish spoken on stage, at least compared to any other presidential debate in history. While some pundits in the media thought this was a good idea, this overwhelming response suggests otherwise. The only Spanish spoken on the second night was when Jose Diaz-Balart greeted Pete Buttigieg in Spanish, who then returned the favor (were any of the others bilingual?) 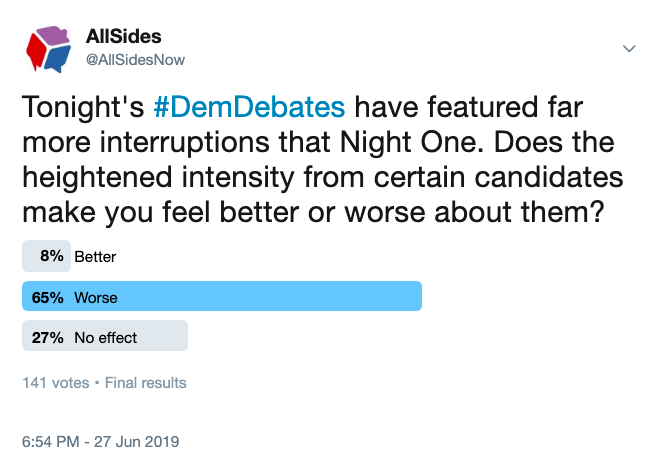 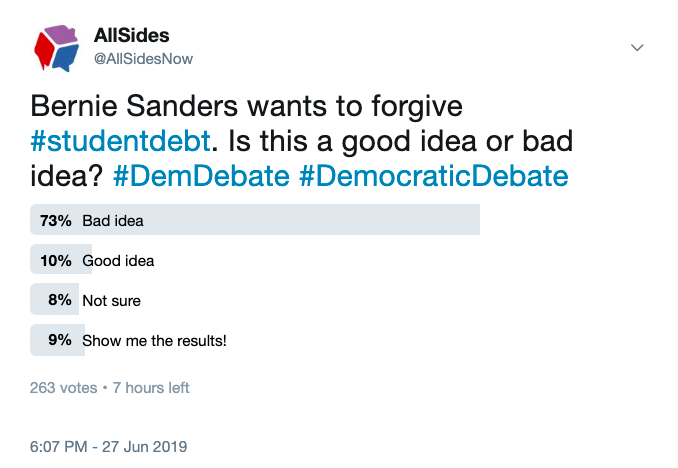 Considering all the promises from candidates like Elizabeth Warren and Bernie Sanders about forgiving student debt, this result surprised us. As mentioned earlier, more polling and analysis are needed, as Twitter polls are perhaps too informal for hard-hitting data. 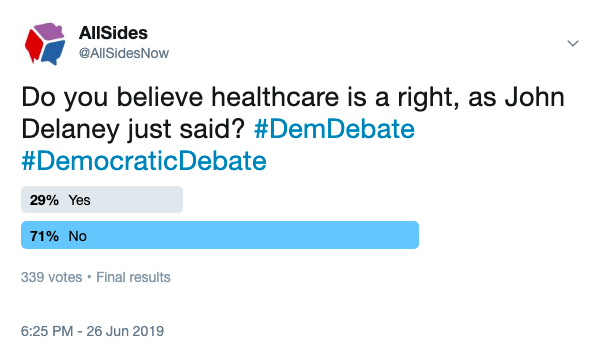 More than two-thirds of our Twitter respondents believe that health care is not a right. This might have to do more with the fact that our audience includes people from the left and right, and during Twitter sessions, any group can skew the results. During the second debate night when there was more discussion about this, it became clear that the Democratic Party's nominee will argue that it is a right. 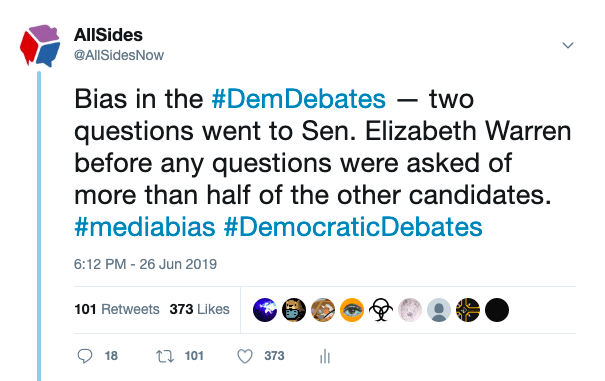 Early in the first debate, AllSides observed that Sen. Warren (D-MA) received far more questions from the moderators; this was our most viral tweet. The moderators’ choice to do this could be explained by the fact that polls show Sen. Warren is the frontrunner among night one’s group of candidates. However, during the second night of debates, the moderators started with a question to Bernie Sanders, and returned to him with a second question very quickly — just as they did with Warren — but early polls showed Biden as the frontrunner, not Bernie. More media bias? 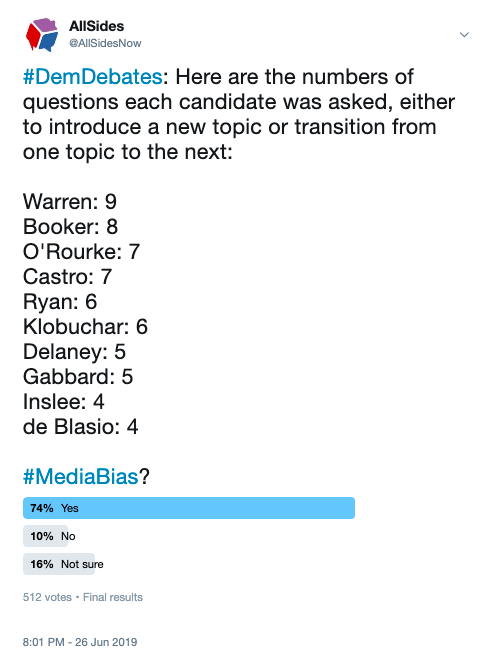 We also counted up the number of questions each candidate was asked on night one. Seventy-four percent of those polled said they thought the discrepancy amounted to bias.

John Gable is the CEO and co-founder of AllSides. He has a Lean Right bias.