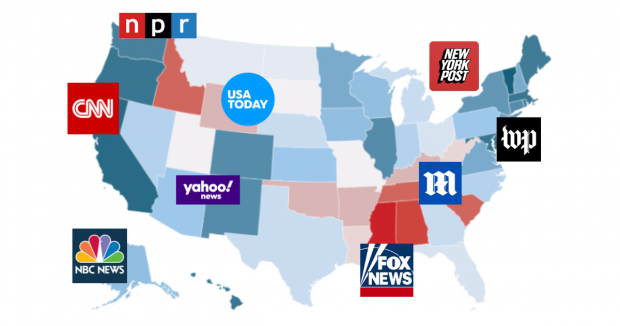 Understanding what media outlets are most popular in a community can give us a glimpse into the media landscape and types of news that people are turning to for information.

These findings are quite similar to what we found when we conducted the same analysis for the year of 2021. However, there were some differences from the previous year, largely in favor of outlets on the left. Mainly, some states in the Northern Great Plains searched more for outlets on the left in 2022, including North Dakota, South Dakota, Montana, and Nebraska. In 2021, each of these states searched for Right-rated outlets more, as a percent of outlets analyzed. View the 2021 analysis here.

The media landscape is largely dominated by left-wing outlets. Many outlets many would consider to be “mainstream” – such as The New York Times (Lean Left), ABC News (Lean Left), CNN (Left), NBC News (Lean Left) – are rated by AllSides as being Left or Lean Left. Not as many outlets analyzed were on the right, simply because they were searched less and didn’t meet the criteria to be included (see below for methodology). Furthermore, some major outlets, such as The Associated Press and NPR, moved from a Center to Lean Left Media Bias Rating in 2022, which may have contributed to the leftward shift among many states.

This analysis measured 19 outlets on the left, 6 rated Center, and 12 on the right, all of which are national news outlets on the Media Bias Chart. The reason for disparity in left and right outlets is due to national media dominance on the left. Read more about our methodology here.

It is also important to note that search popularity does not mean that the outlet is more popular or more trusted for reading the news. For example, Google search popularity for Politico (Lean Left bias) spiked briefly in May 2022 when a leaked draft of a majority opinion obtained by the outlet suggested that the Supreme Court was going to strike down Roe v. Wade.

Here is a full breakdown of total search volume of media outlets analyzed by state:

Why did Left- and Right-rated outlets take up so much of the search popularity in 2022? The answer is because of Fox News (Right bias) and CNN (Left bias) – both of these outlets came out on the top of all others in each U.S. state, based on the outlets analyzed from the AllSides Media Bias Chart™. And in all states except for seven – Massachusetts, New York, Rhode Island, California, Vermont, Maine, and Maryland – these two outlets made up over half of the total search volume of the 37 total outlets analyzed.

Compared to 2021, Fox News gained ground against CNN in 2022. Several states, including Florida, Pennsylvania, and Montana, saw search popularity for Fox News against CNN grow by 5% or more. And one state – Minnesota – saw Fox News take over as the most-searched outlet in the state in 2022, instead of CNN in 2021.

We also calculated a weekly average of searches for partisan outlets over the course of 2022, accounting for all Google searches across the United States.

Powered by Google Trends (read its methodology here) and the outlets displayed on Version 7.1 of the AllSides Media Bias Chart™, we calculated the percentage of searches in all 50 states for each outlet. Outlets for which there was not enough state-level data for the search term in Google Trends were excluded (e.g. Jacobin Magazine, The Christian Science Monitor, The American Spectator). Other outlets that were excluded were those for which the search term(s) for the respective outlet had a high incidence of being for something other than the outlet itself, using Top Search queries for Google Trends (e.g. “The Atlantic” or “Time”).

Outlets used in this analysis that are rated Left were Vox, HuffPost, The New Yorker, MSNBC, CNN, and The Daily Beast.

Outlets rated Lean Right were The Epoch Times, The Washington Times, and The New York Post.

Each outlet made up at least 0.03% of the total searches for news outlets analyzed in each state.

Andrew Weinzierl is AllSides’ Research Manager and Data Journalist. He has a Lean Left bias.