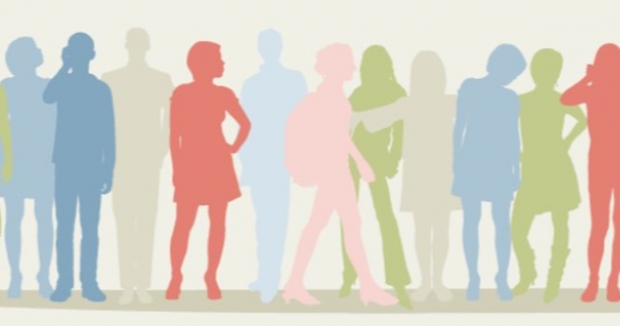 The latest Political Typology Quiz from Pew Research Center (Center bias) splits Americans into nine distinct political groups, rather than two or three parties. But is it accurate?

The AllSides team frequently uses Pew’s typology quiz, our own Rate Your Bias quiz and other tools to make sure our personal bias ratings are transparent and reflect our current political dispositions. This also helps us ensure that our team itself is politically diverse and balanced.

When a team member pointed out that Pew had updated its quiz, many of us took it once again and found that our ratings differed from before.

No quiz like this can ever be accurate for everyone for something as subjective as political leanings. Still, several members of the AllSides staff took the quiz, sometimes multiple times, because we find things like this help us understand where we stand compared to each other and the rest of the country. And since we believe in being extremely transparent about our own biases, we shared our own individual results and thoughts.

Check out how the quiz has changed, our impressions of it, and take it yourself.

Changes to the Quiz and Political Groups

Much of the quiz differs from before. Questions now focus much more on current polarized issues like racism, transgender acceptance and “trusting experts” like health authorities on COVID-19. Based on Pew’s latest survey of the general public’s political beliefs, there are now nine different political groups instead of eight. They’re also named and described differently from the previous version.

The AllSides team had differing reactions to the ratings we were assigned. But one common theme was that nailing down exactly where Americans fall on the political spectrum isn’t easy.

Here’s what some of our team members thought of the new quiz:

The first time I took it, it came out as “Ambivalent Right”. Much of that seemed roughly correct about me except for the title “ambivalent” and their description of relatively low political engagement. Clearly, I am engaged and have been all my life starting in the 80s working professionally in politics and continuing to be very active even as I became a technology professional with Microsoft, Netscape and my own companies.

So then I took it three more times, changing my responses to two or three questions that I struggled with. Two of those times I came out as a “Committed Conservative”, which is not one level but two levels to the right on my first results, and one more as “Ambivalent Right”.

The questions I struggled with the most:

To me, the biggest disadvantages come from education and economic opportunity, as well as a self-defeating culture or mindset. That hits segments regardless of race, and unfortunately many minorities at a greater rate are still locked in that unequal circumstance. It also hits people I grew up with in a small town and in Appalachia. I find it unfair and disheartening that our passion for an individual’s difficult circumstance should be based on race, which I think is what often happens in national and political narratives – narratives which I fear may actually increase inequity and suffering.

So even though there is racism and systems out there that do hurt people, it makes it hard for me to answer the question which views the problem as primarily white vs black when I think the bigger factors are education, economic and culture or mindset. So it is hard to choose which of the 4 levels provided.

Here’s another I struggled with:

Note that I am right of center and live in ultra-progressive San Francisco, so often none of the candidates, certainly in the general election, represent my views well. In statewide elections, like the recent recall Governor election, there were some candidates that fit me (but as usual, they get killed). During national presidential primaries, there are usually a few that match my views. So I wasn’t sure how to answer this one, and went back and forth on this when I took the survey multiple times.

Finally, we need to recognize the limitations and problems with the research. Pew does an excellent job at getting a good sample of participants and normalizing it to match the national audience. They also correctly and transparently state “question wording and practical difficulties in conducting surveys can introduce error or bias into the findings of opinion polls.” This is normal, but some of the questions make me think they fell short here. Biased perspectives of the researchers seem to show up more here than in past attempts, and I find myself wondering about the political balance (or imbalance) of the researchers.

I still applaud and appreciate Pew’s work here, in past surveys, and overall. They do great and important work, and I refer to their research every week. Though I am probably similar to others who wonder a bit about the results and how well it fits, I do think it is a good experience to take the survey and might be useful (especially with other data) to help us understand how each of us are similar or different from others around the nation.

My rating of “Ambivalent Right” was consistent with my “New Era Enterprise” rating from the previous Pew quiz in being one step to the right of center. I’d consider myself fiscally conservative and not politically engaged, but I’d say I’m closer to socially liberal than I am to socially moderate.

However, I feel like a “Stressed Sideliner” far more often than I feel aligned with either side of the political spectrum.

I find my results to be generally accurate. I'm now labeled an "establishment liberal" instead of a "solid liberal."

This generally falls in line with how I think of myself politically — somewhere between the moderate and progressive wings of the Democratic party. I’m more or less comfortable with the ideas of technocratic governance popularized in the Obama era, and I’m sympathetic to the Democratic establishment’s struggles to get into the weeds and get legislation passed.

The Pew quiz says an “overwhelming majority” of “establishment liberals” support President Joe Biden. Given Biden’s low poll numbers, my casual support for Biden would seem to fall in line with this.

“Establishment liberals” are also supposedly the most likely to say that “compromise is how things get done in politics.” I do in fact think this, and I think the massive compromises on the recently-passed bipartisan infrastructure deal and the Build Back Better bill prove this point.

I have seen a lot of people on Politics Twitter saying this quiz doesn't capture their political alignment accurately. For instance, I’ve seen several people who would likely self-identify as “neoliberal” (a group that is generally center-left and opposed to the Republican party) get center-right quiz results.

Of course, any quiz with 16 questions isn’t going to capture the vast complexity of American politics, limited as it is. The first two questions are unfortunate in that they frame the issue of governance the way conservatives do, as a choice between “big government” vs. “small government.” Government is complicated, and most people likely prefer some programs to be decreased and others increased.

The experts/policy decisions question was particularly interesting. It’s an issue that doesn’t fit neatly along a left-right divide.

I was saddened but not surprised to see the question on trans rights, which is unfortunately a contentious social issue right now. That such a vulnerable community is being used as a political wedge issue is a deeply depressing statement about our society, in my view.

By far the most difficult and thought-provoking question for me was the last one, on America’s military hegemony. As a student of international relations, I believe that the rise of other countries’ military power to approach that of the U.S. is inevitable. Just 200 years ago, Britain was the world’s military superpower. 100 years later, the U.S. took the top spot, only rivaled by the U.S.S.R. The idea that we would remain in this position indefinitely, even with the rise of China, India, and others, is foolish. So in a sense, it’s really out of our hands. Now, would that be “acceptable?” It depends on how challenger nations and new hegemons behave. China’s recent behavior is concerning, but I also think it’s irrational to expect the U.S. to retain military supremacy forever.

I received “Faith and Flag Conservatives.”

It seems like the old quiz’s categories were more generous to people who don't really fall neatly into the left or right, with categories such as “Devout and Diverse” and “New Era Enterprisers.” Now, the quiz puts you mostly into left/right categories.

The questions are very much updated for the current year, and relevant to recently polarizing political topics. For instance, Question 3 asks, “In general, would you say experts who study a subject for many years are… better/worse/neither better nor worse at making good policy decisions about that subject than other people.” 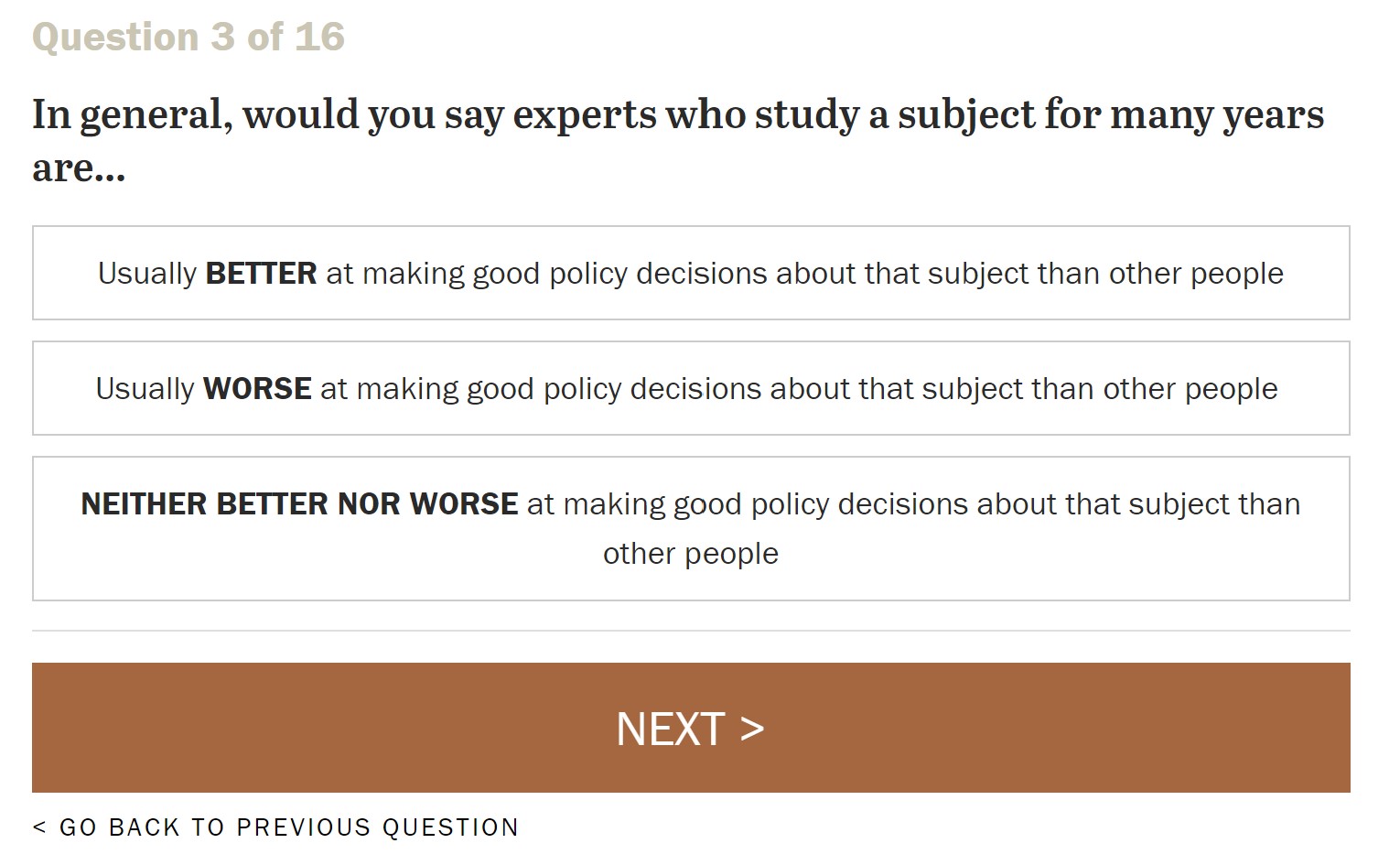 This question is obviously getting at the issue of whether or not we should “trust the experts” on COVID-19 treatment and policies. I wager some people would answer this question very differently in 2011 than they would in 2021.

Overall, though, I felt the quiz captured my political leaning well. Political typology quizzes are always difficult because we can think of a million nuances to any given issue, but this one allowed me to make knee-jerk responses that captured my views well.

While I’m left of center on many issues, I’m not a particularly strong supporter of President Biden, but I agree with Establishment Liberals in compromise on many issues. I also have less liberal views on crime and military (similar to many “Democratic Mainstays”) and am at least somewhat dissatisfied with major political parties (like those in the “Outsider Left”).

There were a few questions that stuck out to me in which I felt like I could justify an answer that fits my beliefs for both/multiple options given. For example, the question about international trade makes the quiz-taker decide whether increased international trade “has helped lower prices and increased the competitiveness of some U.S. businesses” or “has cost jobs in manufacturing and other industries and lowered wages for some U.S. workers”. This was probably the toughest question for me. 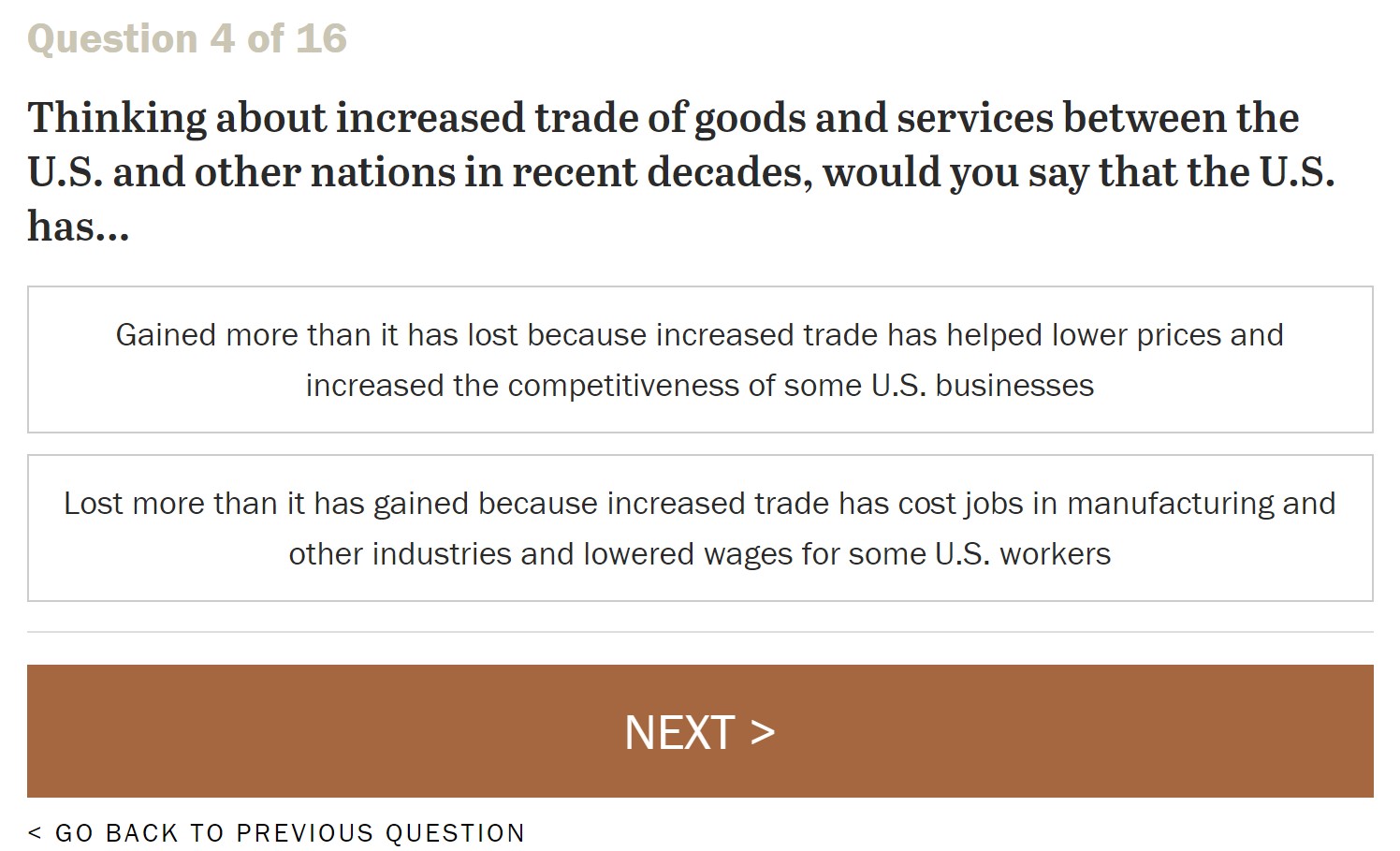 Regardless, I really like that the survey had a few follow-up questions dispersed throughout to measure how intense feelings were towards some answers.

We weren’t alone. Some journalists and columnists also took the quiz, and expressed a mix of reactions to it on Twitter.

Aaron Ross Powell of the Cato Institute (Lean Right bias) tweeted that the quiz is an “example of how surveys are bad at getting at political beliefs.”

Pew Research Center does important work in measuring public opinion and continued that with this survey. There are limitations and problems, but the value shines through.

We should recognize that many of us will not fit perfectly into any of these categories, and that is OK. It is still a way to learn more about ourselves and others, and why people make the political choices that they do. Understanding the motivations and actions of others is a key step toward building respect across partisan divides.

Take Pew’s quiz and our Rate Your Bias test to see where you fall on today’s political spectrum.