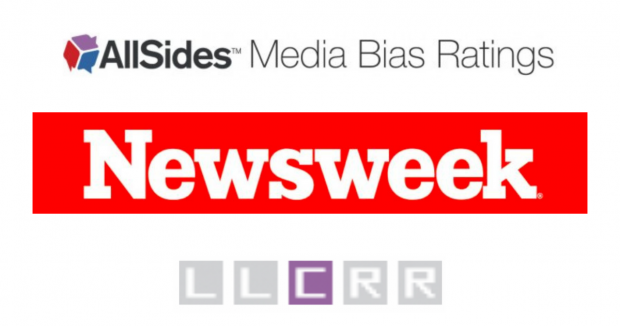 Newsweek’s bias rating was confirmed as Center in the February 2022 AllSides Blind Bias Survey. On average, the 964 survey respondents across the political spectrum rated Newsweek as Center, confirming AllSides’ existing media bias rating of the outlet.

People from across the political spectrum – people who identified as Left, Lean Left, Center, Lean Right, or Right – rated the media bias of Newsweek in the Blind Bias Survey. The weighted average was 0.47 on a scale from -9 to +9, which is on the right side of center but still in the Center category.

Newsweek’s bias has changed dramatically in recent years, going from Lean Left to Left in May 2020, then making a big jump from Left to Center in late 2020 following editorial changes made by the outlet. AllSides has found Newsweek does not predictably publish perspectives or articles favoring either end of the political spectrum — conservative or liberal. Its content features story choices of interest to both sides, and its opinion section is particularly balanced, featuring views from the left and right. Newsweek stands out in its willingness to provide a variety of views.

Newsweek’s bias rating is featured on the AllSides Media Bias Chart™, which has been recently updated with new ratings for NPR, Newsmax, NewsNation, and Insider.