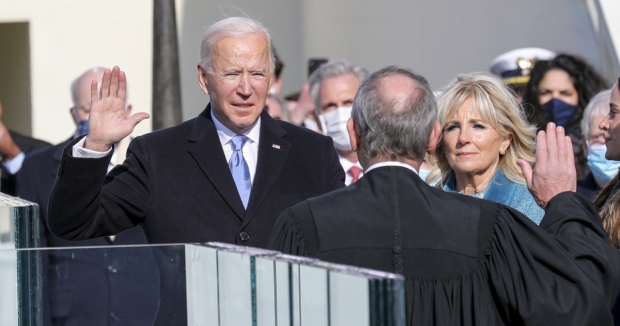 Politicians always talk about unity, especially newly-elected presidents. As is so often the case, Donald Trump was the exception that proved the rule. But Obama, Bush, Clinton and Reagan all spoke about putting aside differences and coming together, reaching out across party lines and finding common ground, about how there is more that unites us than divides us. Etc, etc, etc.

Since Joe Biden ran his entire presidential campaign on this premise, it was no surprise when he devoted his inaugural address to the ideals of unity and cooperation. He talked about these things in the Democratic primary, even when angry progressives could think only of retribution against Trump. He talked about these ideals in the general election, even when they seemed hopelessly outdated in the face of the president’s scorched-earth candidacy. He kept talking about them through November and December and early January, when unprecedented post-election acrimony and violence made such talk sound naïve and unsophisticated.

But right after taking the oath of office, Biden framed the concept of unity in a much less typical and predictable – and more useful — fashion. In the most overlooked sentence of his inaugural speech, Biden said:

“Enough of us, enough of us have to come together to carry all of us forward,”

Enough of us, he said. Not all of us. Enough of us have to come together. That simple word choice is critically important, because it demonstrates a necessary realism in Biden. It would be wonderful if all of us could come together, but that’s simply not going to happen. Rioters in Washington, anarchists in Portland, and too many other Americans on the farthest reaches of both ideological fringes are too invested in the ongoing political warfare.

He looks at the 40 percent of the House Republican caucus that voted to uphold the Electoral College results and he sees potential allies. He sees the bipartisan group of senators that drafted COVID-19 relief legislation last month and he sees a plausible starting point. He doesn’t need Josh Hawley or Ted Cruz. He doesn’t need QAnon or Proud Boys. He just needs enough support from the other side of the fence to get something done.

It is entirely possible that the base of his own party could convince the new president that confrontation makes more sense for him than conciliation. (Keep an eye on the debate over the future of the Senate filibuster.) But while Biden is far from perfect, he is the most experienced politician to be elected president in a generation. Neither Barack Obama, a first-term senator, or George W. Bush, a red-state governor, had ever had to learn how to work across party lines before getting to the White House. The thought never crossed Trump’s mind. Biden makes plenty of mistakes, but he also knows how to deal with the other side. He knows he doesn’t need all of them to cross over. Just enough.

Will Biden be able to pull this off? I have no idea. He will need to move quickly to augment his conciliatory language with substantive policy outreach. But a leader who frames his potential coalition as “just enough of us” has a better chance than most.

Later in his speech, Biden lent historical perspective to our current challenge.

﻿“I know the forces that divide us are deep and they are real, but I also know they are not new,” he said. “Our history has been a constant struggle between the American ideal that we’re all created equal and the harsh, ugly reality that racism, nativism, fear, demonization have long torn us apart. The battle is perennial, and victory is never assured.”

This isn’t going to be easy, Biden told the American people. But we’ve done it before and we can do it again.

There was no soaring oratory the likes of which John Kennedy and Ronald Reagan offered when they took office. But while low-key realism and measured optimism doesn’t guarantee success, it’s the right tone for a new president to take as a first step to begin to repair a broken country.

Want to talk about this topic more? Join Dan for his weekly webinar “Politics In The Time of Coronavirus” on Tuesday mornings at 11 AM PST. You can register for it here. https://www.lawac.org/EventDetail/eventid/30826. Or read more of Dan’s writing at: www.danschnurpolitics.com.