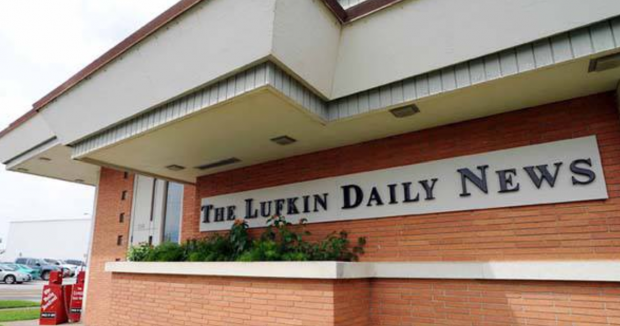 AllSides is proud of the work we do to promote information literacy and awareness of media bias. And when other media companies share that goal, we’re happy to acknowledge it — even when it comes as an unfortunate consequence of bias from major media outlets.

The Lufkin Daily News is a newspaper serving Lukfin, Texas, a city of roughly 35,000 located in the state’s Deep East region. Like many hyperlocal newspapers and media outlets nationwide, it relies on coverage from global news giants like Associated Press and Reuters, who sell their content to small companies which naturally lack the bandwidth to report on national news themselves.

Known as wire services, the content these sources provide serves an essential purpose. Many small papers rely on them to fill holes in the daily agenda. So it was “very troubling,” according to Daily News president and publisher Keven Todd, when readers began contacting the newsroom complaining about overt bias in an AP story about President Trump’s Fourth of July speech at Mount Rushmore, which the Daily News had reprinted.

“We took for granted that it was AP content, and that we could trust it,” Todd told AllSides. “I saw that story and let the editor know right off the bat that it was unfortunate that we let that run like we did, and we should have taken the time to edit it.”

The article uses emotive language and makes numerous subjective judgements. The opening paragraph employs a type of media bias known as flawed logic, when a conclusion is seemingly reached despite a lack of evidence to back it up. The story frames Trump’s speech as “a direct appeal to disaffected white voters.”

AP also describes the speech as having a “discordant tone” and says Trump “used a racist epithet to refer to the coronavirus.” Instead of telling readers what Trump said and allowing them to make the judgement of whether it was racist for themselves, AP strays from objectivity by making the call for readers. Such subjective judgements would fit in an opinion article or analysis, but not in an article passed off as a hard news report and in the absence of supporting evidence.

The article also reports Trump “zeroed in on the desecration by some protesters of monuments and statues across the country that honor those who have benefited from slavery, including some past presidents.” Here, AP ignores concerns from those who note that it was not only statues of slave owners that were toppled or vandalized, but also depictions of abolitionists, authors and missionaries, amounting to bias by omission.

These types of media bias and others are all too common in modern media — even from AP, which since its inception in 1864 has been widely relied on as a model for journalism ethics and commitment to impartiality.

Related: AllSides’ Types of Media Bias and How to Spot Them

AP was the subject of a recent AllSides blind bias survey, as well as a follow-up editorial review by the AllSides team, which found its rating to be Center but to border on Lean Left. The AP’s Fact Check section places a substantial focus on criticizing the president, often with the use of emotive language. AllSides rates AP Fact Check as Lean Left.

AllSides has spent significant time determining our rating of AP. We’ve seen numerous accusations from readers that AP holds a left-leaning bias, and we’ve noted it ourselves when curating their content, particularly when it involves U.S. politics and Capitol Hill. Still, we rate AP as Center on the grounds that most of their work approaches subjects from a nonpartisan angle. (With AP being such an influential news source, we take extra care in rating it thoroughly, and explaining the internal processes that produce the rating. We plan to review AP’s rating again this summer.)

Media bias is widespread; awareness of it is not. Luckily, newsrooms like the one in Lufkin see this problem, and make it a point to take responsibility for calling it out in their own work and elsewhere.

In a July 8 op-ed accepting blame for running the article in question, the Daily News said the piece “could not by any stretch of the imagination be considered unbiased.” It agreed with readers that AP had lost sight of nonpartisan reporting in this instance, and it pledged to place a more critical eye on AP content going forward.

“I felt like we owed it to our readers to explain the sequence of events that caused that to get through our internal checks and balances,” Todd said. “It serves to put our staff on high alert, so we won’t just grab it and go anymore. We’ll take the time to read through it for any sort of off-color narrative.”

It seems like a small-scale solution — the Daily News circulates around 7,500 papers per day — but the premise is core to media literacy’s advancement. Lufkin residents are blessed to benefit from a newspaper that cares about the quality of its work and is conscious of how that work informs and influences its community. This practice seems especially praiseworthy in today’s ever-biased news media climate, but should be standard in all newsrooms regardless of subject matter.

The mission isn’t challenge-free, though. Any time spent by a small staff like the one in Lufkin on re-editing and vetting AP stories is time that could instead be spent improving the local product and serving the community better. For the fees paid by the Daily News and others to use AP content, it should come as advertised — impartial, informative, and ready to print.

Other companies large and small are doing their part to fill gaps created by underperforming media outlets and biased journalists. New technologies are being embraced in an effort to solve the ever-expanding issue of bias and misinformation in online media.

Media Bias Fact Check and Ad Fontes do work similar to AllSides by providing media bias ratings. Newsguard uses technology to rate articles and sources for credibility. The News Literacy Project strives for common solutions to fake news, disinformation campaigns and falsely edited multimedia. Others, like Abridge News and Yahoo! The 360, show perspectives on issues from multiple points of view.

We’ll continue to help acknowledgements like this be more common among journalists. We’ll also continue to scrutinize AP and improve the accuracy of our AP media bias rating. In the meantime, take every opportunity to read stories from more than one angle. Reporters should point you to the information as it exists, free from spin or slant; you should be the one to decide how you feel about it.

Henry A. Brechter is the Managing Editor of AllSides.com. He has a Center bias.