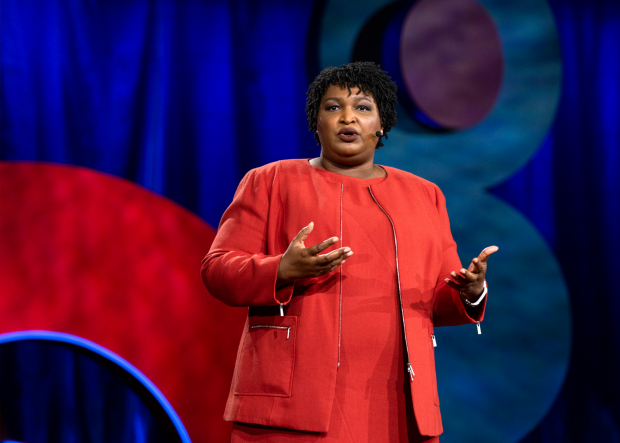 Who is Stacey Abrams?

The 46-year old Georgia politician, who in 2018 became the country’s first female major-party African-American gubernatorial nominee, is one of the names being discussed prominently as Joe Biden’s potential 2020 running mate. But how you answer that first question may depend largely on your news preferences or political biases.

In recent weeks, Abrams has been the subject of several longform profiles, feature stories and opinion pieces from left-rated media giants including the New York Times, the Washington Post and The Atlantic, many of which suggest she’s a solid choice for VP. Here’s a few of those headlines:

Biden has four great options for a black female running mate. One is his best. (Washington Post)

Left-leaning media’s celebrations of Abrams’ character and bolstering of her political status have been evenly matched by a slew of negative coverage and columns from the powers of the media spectrum’s right side.

The New York Post and the Washington Examiner published opinion pieces critiquing Abrams’ credentials. Fox News and others have circulated coverage that paints Abrams as disillusioned or hypocritical, particularly in relation to how she reacted to Tara Reade’s sexual assault allegations against Biden. Here’s some examples of those headlines:

Stacey Abrams: We Should Believe Women But… (Townhall)

Voices on either side have even criticized each other over Abrams’ candidacy. Some left-rated voices allege blatant racism on the part of Abrams’ detractors; some right-rated outlets accused left-leaning media of exaggerating Abrams’ status.

Gosh, what could be behind the right’s hatred of Stacey Abrams? (Jennifer Rubin)

Such buzz around a relatively new and intriguing face in politics is not uncommon. It’s also probably not accidental.

It’s typical for political interest groups and advocates who favor a candidate for elected office to work press contacts in an attempt to drum up positive coverage of that candidate. Meanwhile, groups who may oppose the candidate are likely to work in the opposite direction, mobilizing dissenting voices to create a media backlash against the campaign.

As Biden’s running mate, Abrams would in many ways be comparable to former Alaska Gov. Sarah Palin, the 2008 Republican running partner of late Sen. John McCain. Abrams’ political resume is limited when compared to those of previous vice presidents; she’s paired with an elderly presidential candidate; and her gender would give her a chance to revolutionize the executive branch.

Palin, like Abrams, was glorified in some corners and heavily scrutinized in others. Ultimately, Palin didn't pan out as an adequate VP pick — McCain later said he regretted choosing her. It remains to be seen whether Abrams will be Biden’s choice, or what her future in American politics holds. But don’t let the media decide how you view her as a candidate.

Someone who may have expected to hate Abrams could actually come to support her, and of course vice versa. But those sorts of breakthroughs are impossible when confined to a filter bubble and lost in a sea of bias-confirming content. This is why AllSides exists: to help you get balanced news and diverse perspectives, to read across the aisle so you can get a sense of what is being highlighted or omitted. Instead of letting partisan media decide for you, you can think for yourself.