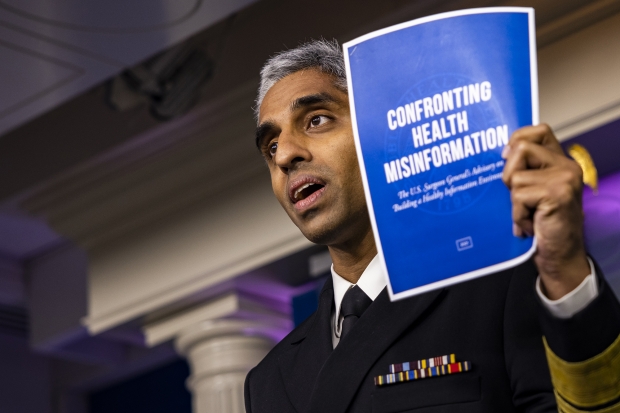 While the ongoing lawsuit has received widespread news and opinion coverage in right-rated outlets, coverage from left-rated outlets has so far been rare. This discrepancy provides a clear example of how story choice and bias by omission can bury a story — or blow it out of proportion.

The request accuses the Biden administration of an “extremely broad” “Censorship Enterprise,” citing several emails already procured through the lawsuit. In one email, a Facebook employee told the Surgeon General, “I know our teams met today to better understand the scope of what the White House expects from us on misinformation going forward.”

On September 6, the judge granted the attorneys general request, ordering Jean-Pierre, Fauci and others to turn over emails and other communications. “This Court believes Plaintiffs are entitled to external communications by Jean-Pierre and Dr. Fauci in their capacities as White House Press Secretary and Chief Medical Advisor to the President to third-party social media platforms,” the judge wrote.

On September 13, three House Republicans sent a letter to President Joe Biden requesting records and communications with social media companies, writing, “We remain concerned with attempts by your administration to pressure private companies like Twitter and Facebook to censor certain speech or silence individuals with whom you disagree.”

On September 14, Fauci said he and members of his office had turned over all documents responsive to the lawsuit and the judge’s order. “I have handed and my staff have handed over every document that the Department of Justice has asked for, and it’s up to them to make it available, but I have held nothing back from anything that I was asked to provide,” Fauci said.

Coverage from the Right

When not portrayed as a “demand,” the coordination between the White House and tech companies was sometimes referred to as “collusion,” and linked it to the Trump-Russia “collusion” investigation, which Republicans have widely criticized. Commentator Tomi Lahren said as much, stating that “Democrats talked a whole lot about collusion when it came to Trump,” but “now the real collusion looks like it’s between Biden and Big Tech.”

Lahren, who said officials were “silencing Americans,” was not alone; outside of straight news, several opinions in right-rated outlets sharply criticized coordination between the White House and tech companies.

One writer in The Washington Times (Lean Right bias) accused officials of farming out “anti-First Amendment dirty work to Big Tech,” implying that the coordination was “decidedly disturbing” and pointed to an “insidious trend.”

Coverage from the Rest of the Media

To date, almost no left-rated news sources covered the recent developments in the lawsuit, though at least one took note of the political right’s reaction.

Mediaite (Lean Left bias), for instance, highlighted Tomi Lahren’s reaction to a White House official’s role in removing an Instagram account pretending to be Fauci. However, the article immediately disputed Lahren’s claims, noting that “Instagram’s terms of service take impersonation so seriously that it is the very first rule they list among the prohibited activities on their platform.”

The author then reveals herself to be a former digital communications director for a 2016 campaign. Apparently, she had to ask Instagram to take down a fake account pretending to be her candidate, potentially establishing precedent for the White House official’s actions.

That’s because the lawsuit serves as a proxy for deeper conservative disagreements with how alleged misinformation has been handled during the pandemic.

During the pandemic, Republicans — who already saw Big Tech as censorious — strongly opposed measures aimed at suppressing COVID-19 misinformation, citing free speech concerns. Today, outlets that cater to the political right are safe in assuming their audiences will click on stories about Republicans suing Democrats to fight “censorship.” Outlets that cater to other audiences, meanwhile, don’t have as much of an incentive to care; those aligned with the political left tended to emphasize trusting public health institutions, and thus were not usually impacted by anti-misinformation policies.

Yesterday’s politics impacts today’s polarized news coverage. This wasn’t the first time, and it won’t be the last.