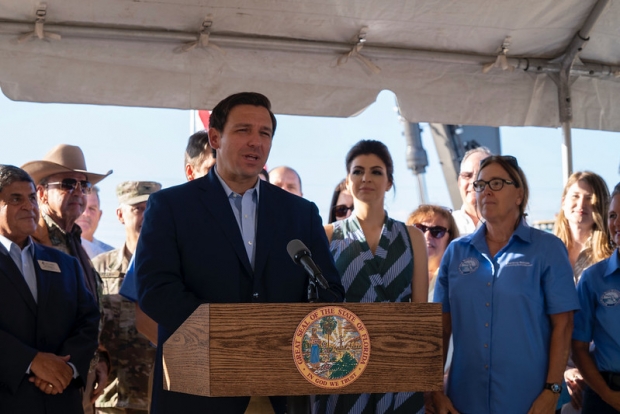 Florida Governor Ron DeSantis (R) recently made headlines when he sent dozens of immigrants from Florida to Martha’s Vineyard. The biases of left and right-rated media could be seen in how they covered the story, with outlets exhibiting bias by viewpoint placement, slant, and word choice in their reporting.

The U.S. has had an influx of migrants crossing the border from Mexico. Two million migrants arrived at the U.S. border in 2022, the most recorded in history. This has led some states along the southern border to disperse immigrants across the country. Buses of migrants arriving in metropolitan cities have caused some cities to declare states of emergency. It’s common to bus or fly immigrants between detention facilities in different cities, but sending them to live in northern sanctuary cities is a relatively new occurrence.

On the left, some view the busing of migrants to sanctuary cities as a cruel example of Republicans using people as political pawns, with some calling it human trafficking. On the right, some think it’s only fair that coastal elites and national politicians feel the same impact of immigration as southern states, and accuse sanctuary cities of hypocrisy for not welcoming migrants and moving them again when they landed.

Governor of Texas Greg Abbott has been sending buses of immigrants to Washington D.C. since April, even sending some to Vice President Kamala Harris’s residence. Following Abbott’s move, DeSantis recruited about 50 Venezuelan immigrants from San Antonio, Texas, and flew them from Florida to Martha’s Vineyard. Martha’s Vineyard is a popular vacation spot in the summer, particularly for the wealthy, and calls itself a sanctuary city. Two days after arriving, the local government announced the state was sending the immigrants to temporary accommodations at Joint Base Cape Cod in a neighboring county, where they would receive humanitarian support and dormitory-style shelter. It said the island communities were not equipped to provide accommodation.

A class action lawsuit has been filed against DeSantis, arguing the immigrants were misled about the aid they would be provided in Martha’s Vineyard. Furthermore, a San Antonio sheriff opened a criminal investigation into whether DeSantis’ administration broke the law.

The Daily Caller (Right bias) said that immigrants were given information packets that “included a map with Martha’s Vineyard marked with a red star with the label “YOU ARE HERE,” written in both English and Spanish. The packets also had documents with local resources, including the contact information for community services and churches in the area, potential employment opportunities and public assistance programs.”

This information was used to support the right’s argument that DeSantis’ actions were justified because the immigrants gave informed consent to be moved. The Daily Caller article also consistently referred to the Venezuelans as “illegal immigrants,” showing word choice bias.

Breitbart (Right) reported on a poll that found “44 percent of swing voters said they support governors like DeSantis and Texas Gov. Greg Abbott (R) busing and flying illegal aliens out of their states to sanctuary cities like Chicago, New York City, and Washington, D.C.” Using the term “illegal aliens” also indicates word choice bias, because it emphasizes the “otherness” or foreign nature of the immigrants; it is language accepted by some on the right and typically rejected by those on the left, who argue it is dehumanizing.

The Epoch Times headline stated, “Deported Immigrants Say They Want to Return to ‘Beautiful’ Martha’s Vineyard.” The article quotes some of the immigrants, who were bussed to a nearby emergency shelter that was better equipped to handle the influx; they remain in the United States. The Epoch Times headline showed slant, as it emphasized the view that the immigrants were fortunate to arrive in Martha’s Vineyard, counter to the left’s argument the move was inhumane or cruel.

Left-rated media was more likely to refer to the group of Venezuelans as simply “migrants” and emphasized that they have a right to seek asylum under U.S. law. They also downplayed the consent of the immigrants and emphasized the betrayal felt by some of those who were moved to Martha’s Vineyard. The outlets generally portrayed a pro-immigration stance and pointed out the legal protections for asylum seekers, including those who enter the country illegally.

CBS News (Lean Left) used the term “illegal Immigrants” in quotes, implying that they disagree with that terminology or characterization of the immigrants. CBS also chose to include information about protecting these immigrants from deportation, whereas articles on the right didn’t. The article also explicitly mentioned that DeSantis omitted this information that CBS deems relevant.  The article states,

“While DeSantis' office didn't elaborate on their legal status, many migrants who cross the border illegally from Mexico are temporarily shielded from deportation after being freed by U.S. authorities to pursue asylum in immigration courts — as allowed under U.S. law and international treaty — or released on humanitarian parole.”

NPR (Lean Left) displayed bias by viewpoint placement in its article about the lawsuit pertaining to DeSantis. The article's first half describes the lawsuit's merits and quotes the attorneys. It isn’t until the last two paragraphs that the author, Matt Adams, presents DeSantis’s point of view. Adams writes “He [DeSantis] also asserted that all of the migrants had signed consent forms (which his office later shared with NPR).” Burying the consent forms of the migrants in parenthesis in the second to last paragraph of the article deemphasizes this aspect, demonstrating viewpoint placement bias.

Business Insider (Lean Left) and Washington Post (Lean Left) both wrote articles about individuals who felt personally betrayed — the Washington Post highlighted a migrant who went to Martha’s Vineyard and said he “didn’t like the way they treated us”, while Business Insider highlighted a man who helped move the migrants who said it was “deception.” By highlighting these voices, the outlets showed bias by viewpoint placement.

An article by the Associated Press (Lean Left) and Mass Live stated that the migrants are in the country legally for a temporary period and that “migrants may seek asylum if they enter the country illegally under U.S. and international law, and U.S. authorities have broad authority to grant parole based on individual circumstances.” They also addressed whether the migrants were kidnapped — acknowledging they traveled voluntarily — and described the difference between this situation and the regular practices of the Biden administration. These are points  that primarily align with the left, who tend to focus on pathways to asylum and legal immigration, whereas the right is more likely to focus on the fact that immigrants entered the country illegally and whether DeSantis did anything wrong, but not going as far as to pose the question of “kidnapping.”

CNN Business (Lean Left) labeled the immigrants as “legal asylum seekers,” showing word choice bias, and juxtaposed DeSantis’s decision to fly them out of Florida with Florida’s need for workers, running the headline, “While DeSantis was flying legal asylum seekers to Martha’s Vineyard, business owners in his state were struggling for workers.”

This article demonstrates a left-leaning slant, because it focuses on those who see immigration as a positive for the economy, and doesn’t feature any opposing views from those who believe that increasing immigration could be negative for Florida’s workers (the right typically argues that it creates more competition for jobs or depresses wages for natives).

Related: Democrats and Republicans Actually Agree on These Immigration Views and Policies

The right and the left showed bias in their reporting on the Martha’s Vineyard relocation and subsequent lawsuit. If you only read left-rated outlets, you’d only hear criticism of the move; if you only read right-rated outlets, you’d only see arguments in favor. To ensure you are getting the full picture and can decide for yourself what you think, check the AllSides Balanced Newsfeed and keep up with our Media Bias Alerts. We have recently analyzed coverage of the alleged election breach in Georgia and the social media censorship lawsuit against the Biden administration.