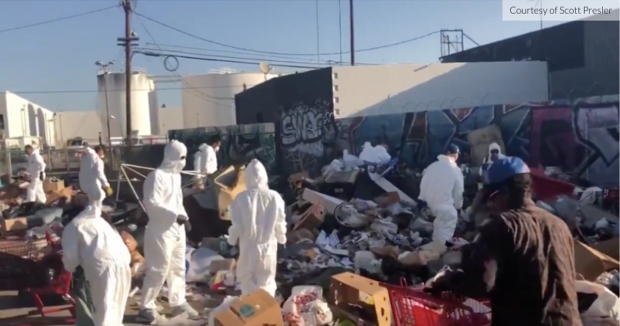 Los Angeles residents who read only media outlets from one side of the political spectrum may have missed an important story this week.

As AllSides outlines in 11 Types of Media Bias, a comprehensive guide to spot bias in the news, bias by omission is a type of bias in which news outlets choose not to cover a certain story or omit information that would support an alternative viewpoint. This week, there was a clear instance of bias by omission in the Los Angeles press.

Browsing through Twitter earlier this week, I found videos of a massive trash cleanup of a Los Angeles homeless encampment that appeared to take place over the weekend. A group of over 200 volunteers conducted the cleanup, organized by a man named Scott Presler.

This is one of the proudest moments of my life.

This impressive feat and act of human kindness strikes me as very newsworthy — not just because of the selflessness of it, but because rampant homelessness in cities like Los Angeles is a major socio-political problem. Revealing the amount of trash that has collected in some areas due to the problem seems like relevant information that may help people to take the issue seriously as a public health and safety concern. I would think that local news outlets would be happy to cover this — maybe copycats could be inspired? — so I was surprised to see that as of the time of this writing, not one local news outlet had covered the cleanup.

I have to wonder if this case of bias by omission is due to the fact that Presler is a vocal supporter of President Trump. He filmed a video asking prominent Democrats not to commit any funds to illegal immigrants so long as there are homeless Americans. Anyone living in 2019 America knows that many folks do not see Trump supporters as good people. It's not uncommon to hear of people losing friendships or experiencing strained family ties over their support of the president. Could it be that Presler's cleanup was ignored because it doesn’t fit a particular narrative about Trump supporters? Or perhaps media outlets didn't want to give Presler airtime because they don't want his conservative messages to be heard. But even if reporters disagree with Presler's politics, what he did was undeniably a newsworthy event. It involved over 200 volunteers, it occurred in public, it improved the city streets, and it brought light to a key socio-political issue of our time.

Notably, the media outlets that covered the cleanup are national outlets that have a Lean Right or Right AllSides Media Bias Rating: Townhall, The Daily Caller, The Epoch Times, The Daily Wire, CNS News, and Breitbart.

It's unclear where exactly the trash cleanup took place in LA, how Presler's team disposed of all that garbage, or whether or not a third party independently verified that it was indeed 50 tons of trash. An AllSides staffer also raised the question of whether or not Presler alerted local media outlets to his efforts beforehand, inviting them to cover the event. Even if he didn't, the event was well-documented on social media, so it's notable that there is no coverage days later, especially after the event picked up some national coverage.

To the credit of the local Baltimore press, Presler’s Maryland cleanup got significantly more local press attention, with coverage in the Baltimore Sun, CBS, and NBC affiliate WBAL Baltimore.

Los Angeles residents who read only media outlets from one side of the political spectrum would have missed this story entirely. This doesn’t fare well in a country suffering from high levels of political polarization, where people often view the other side as downright evil. The media should showcase newsworthy acts on both sides, especially if those acts reveal our shared humanity. Instead, this time Los Angeles media outlets chose bias by omission, leaving readers in the dark.

Update 9/24, 9:50 p.m. EST: AllSides spoke with Presler, who clarified that the cleanup took place off Oxnard Street in Van Nuys. He said the team disposed of the trash in multiple dumpsters that were brought to the area over the course of a few days. When asked about involvement from city government, Presley stated, "Quite frankly, the cities have't been very helpful at all," adding that he was denied permits for dumpsters during his Baltimore cleanup.

Lisa Azo, an employee at Classic Club Service, a towing company with an office next to the cleanup site, said she watched the cleanup over the weekend and confirmed it was a volunteer operation with no city officials on site. She told AllSides, "I praise them. We've been calling the city for six months about that trash and nothing has been done."

Have you noticed any newsworthy stories missing from media outlets lately? Let us know.

Henry Brechter, AllSides Daily News Editor, contributed to this report. He has as Center bias.