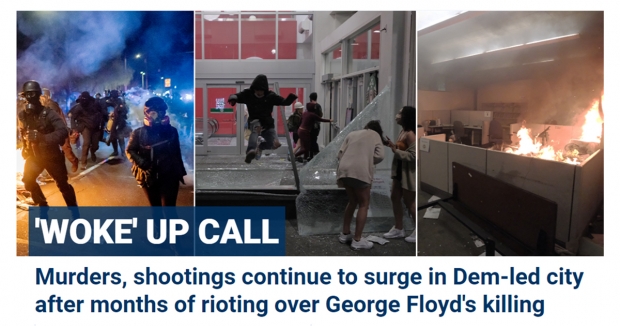 Stories like the U.K. heat wave and President Joe Biden’s poll numbers have been top news across the political spectrum for the past week. On Monday, however, Fox News (Right bias) used the top spot on its homepage to tie gun violence in Portland, Oregon to Democrats, “wokeness” and the 2020 George Floyd protests.

The article, headlined “Portland, the site of massive George Floyd protests, has been ravaged by violent crime since,” is a good example of several types of media bias, including slant, photo bias and bias by story placement.

How Did Fox News Connect The 2020 Portland Riots to Homicide Rates?

The Fox News article focuses on a new report, titled “Portland Homicide Problem Analysis 2019-2021,” which showed that homicides increased rapidly in the city in 2020 (57 homicides) and 2021 (88 homicides).

While the jump in homicides was largest in those two years, the increase began in 2019, when homicides jumped to 36 — well over the previous 20-year average of 28 homicides per year.

In a statement about the report, Portland Mayor Ted Wheeler said:

“This report confirms the unfortunate reality of what we already knew – that gun violence is on the rise in Portland and that it is being driven by a very small percentage of our population.”

“I look forward to incorporating this important data and the recommendations from California Partnership into our future efforts to address gun violence, including Safer Summer PDX and beyond."

Notably, the Portland homicide data wasn’t entirely new; the Portland Police Bureau makes this and other crime data freely available on its website. What was new was the report’s analysis of Portland and other cities’ gun violence data over time.

The report notes that the 2020 protests and budget cuts placed personnel strains on Portland police in the summer of 2020. However, it singles out social connections as a “key predictor” of whether someone will be involved in gun violence — both in Portland and across the nation. “The more someone is connected to individuals who are victims or perpetrators of shootings, the higher their risk,” the report explained.

Fox News makes the causal connection between this report and the 2020 riots via its photo choice and a quote from Hannah Meyers, director of the policing and public safety initiative at the Manhattan Institute (Lean Right bias). Meyers is quoted describing “the Ferguson effect,” in which police departments “pull back while violent crime spikes precipitously” following “viral police incidents” like the 2014 shooting of Michael Brown in Ferguson, Missouri. Meyers said the 2020 riots followed a national pattern of rising crime and violence in the wake of George Floyd’s murder.

This connection may be merited, but it is barely explicitly stated in the article itself, which instead relies on headlines, photos and subtext to build its case: Democrats are “woke,” Democrats run Portland, Democrats are responsible for the 2020 protests and riots, the riots made police withdraw, and that made homicides spike, so “woke” Democrats got Portland residents killed.

Demonizing Democrats, popular villains in Fox’s coverage, very likely drives engagement from Fox’s audience. The editorial staff at Fox News knows this, so they put this story at the top of their homepage — even though few other outlets did.

Fox News is one of many outlets that regularly uses one headline for articles when they appear on the homepage, and another headline for that same article once you click to read it. Where Fox differs, however, is in the degree of sensationalism, spin and opinion used on its homepage. The Portland homicides article is yet another example of this practice.

The main article headline, “Portland, the site of massive George Floyd protests, has been ravaged by violent crime since,” contains its own bias, including the use of the spin words “massive” and “ravaged.” Furthermore, its side-by-side presentation of protests and crime creates the impression that the two are linked.

On the Fox homepage, however, the headline linking to this article reads, “Murders, shootings continue to surge in Dem-led city after months of rioting after George Floyd’s killing.” It features the tagline, “‘WOKE’ UP CALL,” implying that the city of Portland should take this report as a sign to change its ways, perhaps in a politically rightward direction. 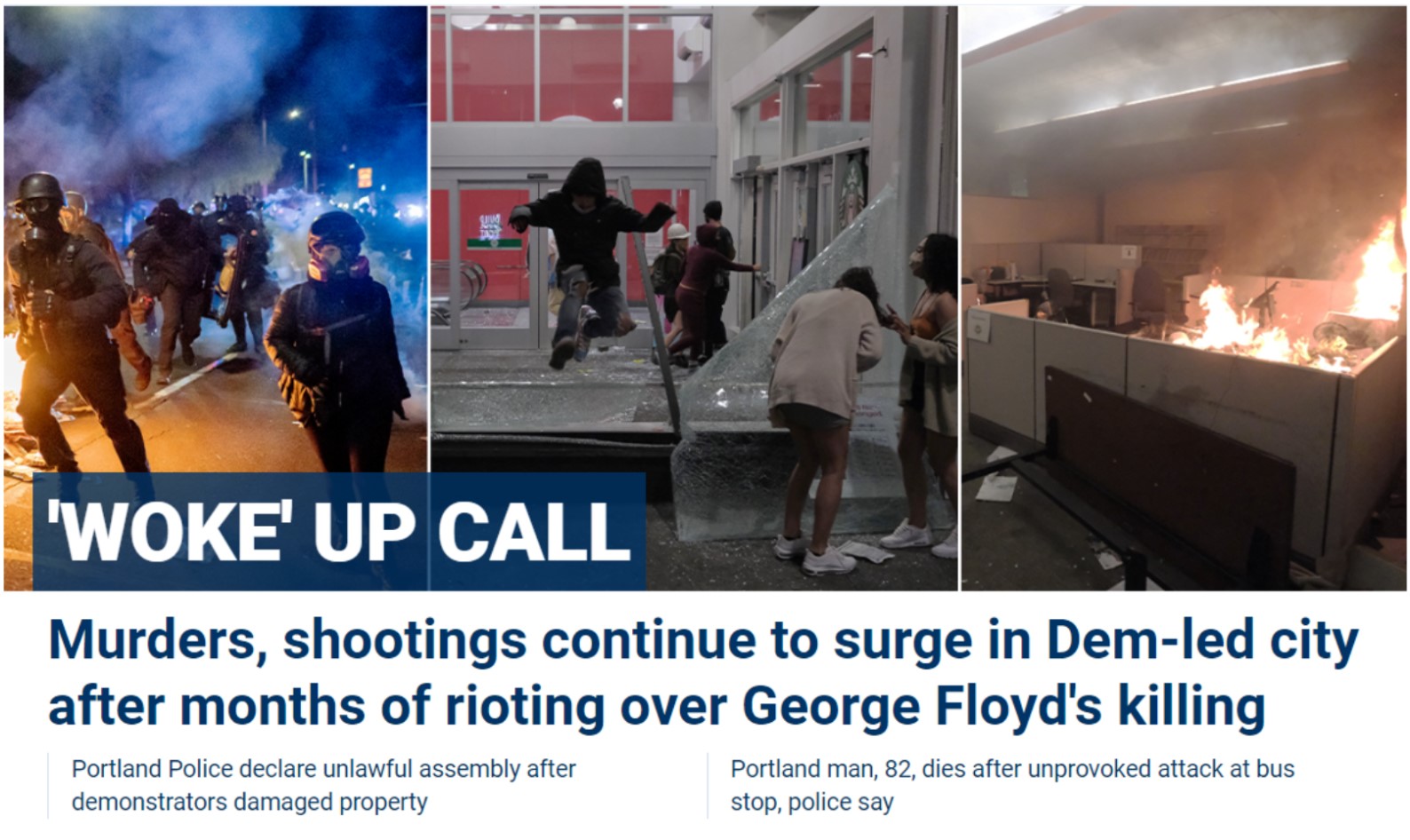 There are multiple instances of bias in the homepage headline, including language like “surge.” “Dem-led” framing is commonly used in Fox headlines and usually implies criticism of Democratic policies; other instances include “Dem-led cities resist against border wall” and “This Dem-led state is hiring a misinformation specialist ahead of the midterms.”

Instead of photographs of crime scenes, police or other crime-related images, the Fox article featured one photo of Portland’s mayor (a Democrat) and three photos from the 2020 riots: riot police standing in front of a fire in a street at night, a black police officer appearing shocked and a protester burning an American flag. 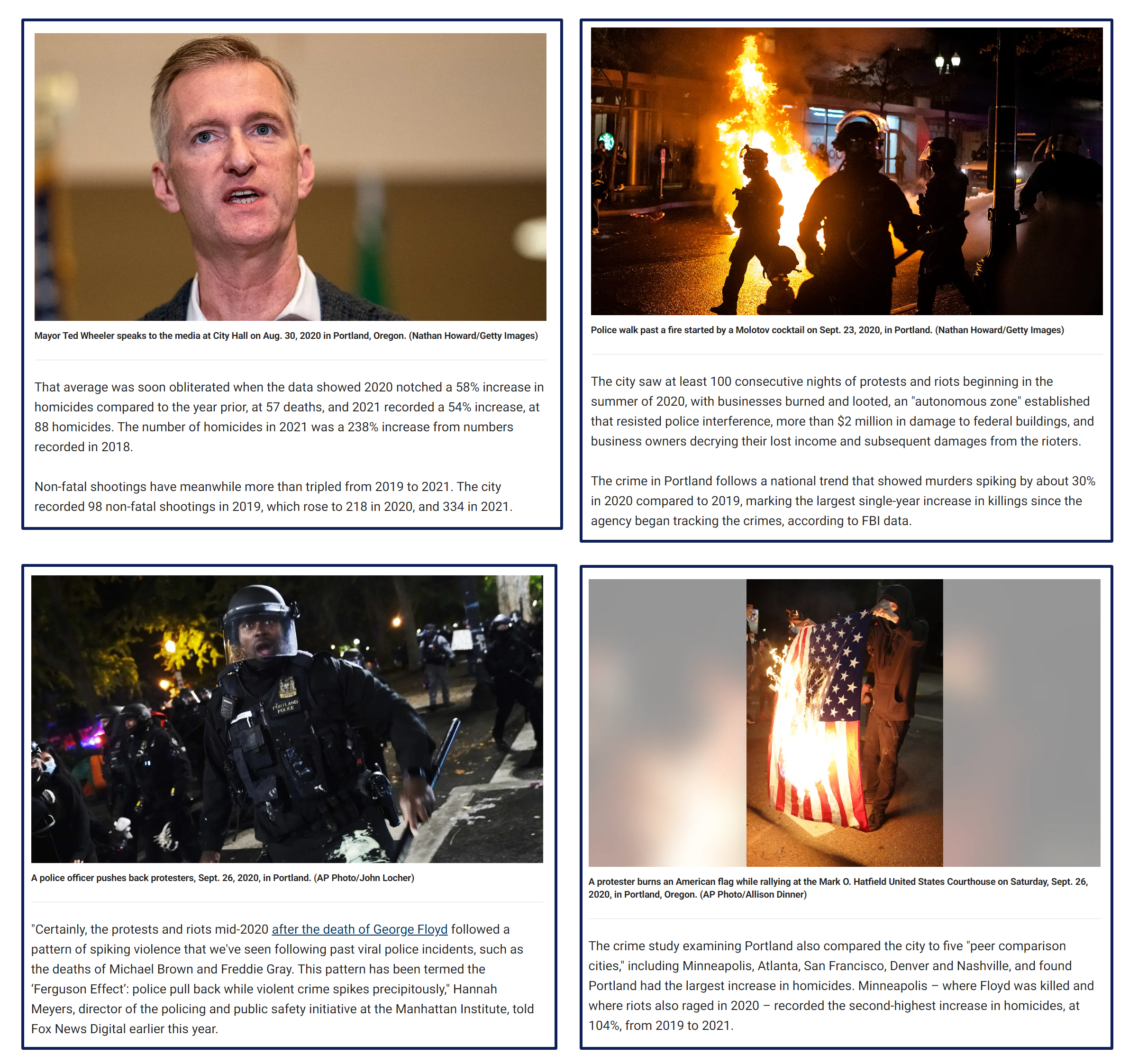 The article was featured on Fox News’ homepage with a photo collage including protesters wearing gas masks in a crowded street at night, a hooded man jumping through a broken retail store window and a fire in an office cubicle.

Of the photos included in the article, only the image of Portland’s mayor had anything to do with the homicide report specifically. Even then, it wasn’t a recent photo — it was from a press briefing in August 2020, following a deadly clash between Trump supporters and Black Lives Matter protesters.

While the text of the article itself made relatively few allusions to the headline’s argument, these photos helped fill in the blanks. Why did Portland’s homicide rate rise so quickly? Here’s an image of a burning flag — perhaps Portland Democrats don’t respect America?

Thus, Fox News manages to make its argument without having to write it down explicitly, which would require evidence and open it up to criticism, instead using media bias by slant to frame the story in a way that reinforces a particular worldview and narrative. You can’t really fact-check the implications of image placement, after all.

Headlines and Photos Can Reveal a News Outlet’s Priorities

What Fox News chooses to place at the top of its homepage says a lot about the outlet’s political bias. Articles placed “above the fold” convey what the outlet’s editorial team thinks is the most important and deserving of readers’ attention. It’s the largest, highest and most visible place on the site’s homepage, and for Fox, the layout almost never changes. As with the top result in Google searches, it likely receives a disproportionate share of traffic. Bias by story placement can clue us into an outlet’s bias.

On Monday afternoon, Fox News’ editors decided that Portland homicide data deserved that top spot. By Monday evening, they had moved on to another politically charged headline, this time about gas prices. Portland homicides wasn’t just gone from the top section of the homepage, which has room for at least five main stories; it was gone from the homepage entirely. What was once good enough to get top billing suddenly wasn’t worth any attention at all.

As the top news source for the political right, Fox News’ bias has a disproportionate impact compared to other outlets. Thus, when it uses its homepage, taglines, headlines and photos to convey opinions within news coverage, those opinions get magnified. This kind of intentional editorial bias is common among smaller news outlets, but Fox News is no mere blog. While it is perfectly capable of delivering news with less bias, it frequently chooses not to.

AllSides points out media bias from left to right. See our latest bias alerts on coverage of Democrats getting arrested at abortion protest, a 10-year-old Ohio girl who got an abortion in Indiana and former Japanese Prime Minister Shinzo Abe’s death.


Joseph Ratliff is a Daily News Editor at AllSides. He has a Lean Left bias.