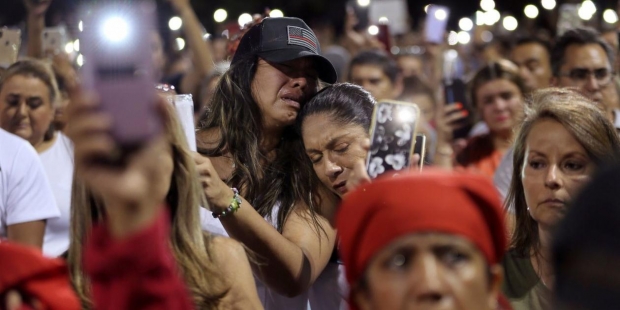 Two tragic mass shootings in Dayton and El Paso last weekend prompted a resurgence of debates on gun control, gun rights and underlying causes, both on Capitol Hill and throughout the country.

Media coverage was largely split in the aftermath. Many left-leaning outlets focused on white nationalism, and reported on the Texas shooter's fears of a "Hispanic invasion," connecting it to similar comments on immigration from President Donald Trump; right-leaning media concentrated on free speech arguments, alienation among young men, and the Ohio shooter's self-proclaimed leftist politics. Many outlets on all sides covered ongoing gun legislation efforts.

After the shootings, one side of the media was represented on Google far more than any other. AllSides conducted an audit of Google's "Top Stories" section in the days following the tragedies, and found significant evidence of a left-leaning media bias.

Trump also tweeted about media bias. The President took to Twitter on Monday, calling on the media to be "fair, balanced and unbiased" to help prevent similar events.View it on our blog.

"Both suspects used guns that they purchased legally, law-enforcement officials said. Officials described both investigations as in their early stages, and federal officials were looking for any connection between the mass shootings, said Emmerson Buie Jr., the Federal Bureau of Investigation special agent in charge in El Paso."

"Contenders for next year’s Democratic presidential nomination criticized President Trump, a Republican, for his rhetoric on immigrants, saying that played a role in inciting the suspected Texas gunman. They also faulted Senate Republicans for not passing legislation they said would help prevent mass shootings."

"Outside Dayton’s Miami Valley Hospital, at least 200 protesters gathered, blaming Trump’s incendiary rhetoric for inflaming political and racial tensions in the country and demanding action on gun control. Some said Trump was not welcome in their city. There were Trump supporters, as well."

"Some 85% of U.S. adults believe the tone and nature of political debate has become more negative, with a majority saying Trump has changed things for the worse, according to recent Pew Research Center polling. And more than three quarters, 78%, say that elected officials who use heated or aggressive language to talk about certain people or groups make violence against those people more likely."

"Now, the mounting tensions of racially motivated rhetoric, a polarizing president and Republican infighting have rocked Texas’s political leadership to its core. And the state may soon face a tipping point brought on by shifting coalitions of voters who want change, in Austin and Washington."

"The Texas miracle that three successive Republican governors have touted has attracted millions of new residents in search of jobs, and those newcomers, many of them from California, are shifting the state’s politics. One percent of the state of California, with a much more liberal population, has moved to Texas."

"The escalating global death toll from white nationalist attacks puts a spotlight on the social media companies that have allowed white nationalists to organize on their platforms with little interference, as well as on the clear parallels between white terrorists’ justification for their attacks, and the racist and anti-immigrant rhetoric of some mainstream politicians. Donald Trump has repeatedly referred to immigrants and refugees as an “invasion”."/p>

"And although politicians often label white nationalist violence as “senseless”, analysts suggest that hate crimes often spike alongside political events like elections. Many of these “senseless” attacks have been carried out during key moments of mainstream political debates over immigration and refugee policy."

"Whether the proximate cause was political or personal, whether it grew out of ideological indoctrination, mental illness or some toxic blend of factors that left shooters isolated and damaged, each attack demonstrated a troubling disorder festering in modern America."

"The weekend’s violence rekindled an array of other national arguments: over gun rights, over pop culture, over social media and over what constitutes terrorism. Amid the overwhelming tragedy of the shootings, the El Paso incident drew special attention to the problem of lone-wolf shooters and whether they should be viewed as isolated actors — “sick people,” in the words of White House chief of staff Mick Mulvaney — or as part of a larger, ideologically driven movement."

"The South Carolina Republican’s announcement came soon after President Donald Trump also called for such laws, which allow police and family members to request that a court temporarily restrict the access to firearms of people who may pose an imminent threat to themselves or others."

"Passage of legislation to promote red flag laws in the states would be a relatively modest response to the shootings that killed at least 31 people in El Paso, Texas, and Dayton, Ohio. But even that may be difficult with GOP opposition to most measures intended to curb gun violence."

"“One of the children went up to hug him so he got down on one knee to let him,” said Jimmy Villatoro, who described meeting the president at the city’s University Medical Center, where many of the wounded were treated. “It was a different side of him, one that you don’t see in public,” Villatoro said in an interview with the Washington Examiner."

"Villatoro has become something of a local celebrity as details of his heroism spread...He ignored the sight of blood and bodies to try to find the children who had been selling lemonade. He led them to safety after they called to him from their hiding place behind a car in the parking lot."

"“I want socialism, and i’ll not wait for the idiots to finally come round to understanding,” he wrote in one tweet, according to Heavy.com. The breaking-news outlet said it had found Betts‘ Twitter page (handle @iamthespookster) and verified that the account belonged to the gunman “through multiple verification factors, including a matching tattoo on both a page selfie and prominent news outlets’ pictures of Connor Betts."

"The Twitter account painted a picture of a left-wing anarchist and discontent, very far from the anti-immigration manifesto posted by Saturday’s El Paso gunman."

Yes, we need to 'do something' about mass shootings. But that 'something' starts in the home, not Washington.

Matt Walsh for the Daily Wire

"Would the El Paso shooter have still committed his terrible act even if his parents stayed together? What about the Sandy Hook or Christchurch shooter? What about any of the hundreds of killers and gangbangers in the inner city? Would they all have ended up on a different and better path had they been raised in a home with a present and active father? We can't say for sure, but the chances seem pretty good."

"None of this should be considered an excuse for mass murderers. They are responsible for their actions, regardless of these disadvantages. But it's better if our kids don't have the disadvantages to begin with. And that's where parents, especially fathers, come in. We should focus on this step before we worry about passing new laws."