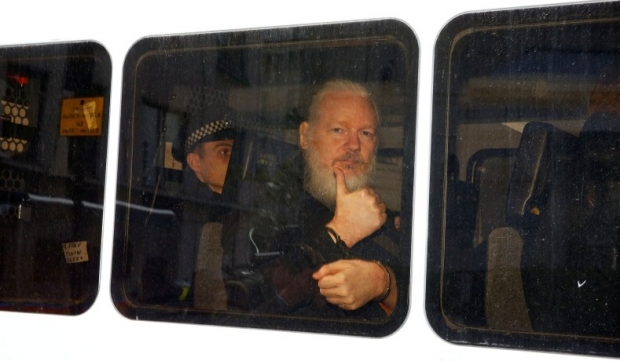 Wikileaks founder Julian Assange was arrested in London yesterday and charged with conspiracy to commit computer intrusion.
Media outlets, pundits, and politicians across the aisle are split: Some say that Assange must be punished for exposing classified information, while others say that his arrest poses a problem for freedom of the press and civil liberties.
Check out some other big stories this week: Homeland Security Secretary Kirstjen Nielsen Resigns, Economy Adds 196,000 Jobs in March, Exceeding Expectations, and Federal Judge Blocks Trump Admin Policy Requiring Asylum Seekers to Wait in Mexico.

Julian Assange Was a Window into America’s Polarized Soul
National Review
"There is no virtue in Assange. Those who celebrated his “transparency” in the Manning document dumps forget that responsible reporters who gain access to classified material carefully vet that material to make sure that their disclosures do not needlessly endanger innocent Americans, and they carefully weigh the value of the disclosure against the gravity of the harm. Assange and Manning did not seem to care about the men and women they betrayed."
Accountability for Assange
Wall Street Journal Editorial Board
"Despite his many apologists, Mr. Assange has never been a hero of transparency or democratic accountability. His targets always seem to be democratic institutions or governments, not authoritarians. If he really is such a defender of transparency, he should have no fear of a trial to defend his methods.”
Julian Assange and WikiLeaks Deserve Our Thanks for Making Governments More Transparent
Reason
"There are legitimate questions about WikiLeaks' relationship with the Russian government, but it's the worst sort of whataboutism to argue that WikiLeaks' revelatons about the United States government should not be taken seriously until it releases equally damaging material about, say, the Putin regime. The information it has shared about the United States is widely understood to be accurate; calls for some sort of geopolitical balance doesn't make the group's revelations about our leaders any less true."

Julian Assange arrested in London on behalf of US
The Hill
"The Department of Justice announced Thursday that charges were filed against Assange for allegedly conspiring to hack into computers in connection with the organizations’ release of classified government cables from Manning, a former Army private and intelligence analyst."
U.S. charges Assange after London arrest ends seven years in Ecuador embassy
Reuters
"Police said they arrested Assange, 47, after being invited into the embassy following Ecuador’s withdrawal of asylum. He took refuge there in 2012 to avoid extradition to Sweden over a sexual assault investigation that was later dropped."
Julian Assange: Sweden considers reviving rape inquiry
BBC News
"Assange was accused of rape following a Wikileaks conference in Stockholm in 2010. He has always denied the allegation, saying the sex was consensual."

The Guardian view on Assange and extradition: say no to the US
The Guardian Editorial Board
"And while Mr Assange is accused in this case of assisting in the cracking of a password, many will fear that the conspiracy charge could be more broadly applied, particularly by an administration so hostile to a free, independent press."
Julian Assange is not a free-press hero. And he is long overdue for personal accountability.
The Washington Post Editorial Board
"Also unlike real journalists, WikiLeaks dumped material into the public domain without any effort independently to verify its factuality or give named individuals an opportunity to comment. Nor, needless to say, would a real journalist have cooperated with a plot by an authoritarian regime’s intelligence service to harm one U.S. presidential candidate and benefit another."
Julian Assange’s Arrest Should Worry Anyone Who Cares About Freedom of the Press
The Nation
"But this indictment raises far more consequential questions, especially coming from an administration already committed to attacking press freedom on multiple fronts. In that context, this is a politically motivated prosecution. At bottom, it is about whether investigative journalists and publishers, from little community news outlets to transnational publishing platforms, enjoy First Amendment protection in their relationships with confidential sources. It is, in other words, about the future vigor of investigative reporting."
Discover more on this topic on AllSides.
Tags:
Politics
Julian Assange
WikiLeaks
Story of the Week
News