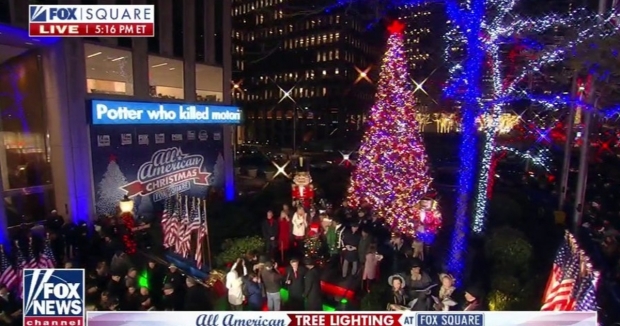 When a man allegedly lit fire to Fox News’s 50-foot Christmas Tree, did that represent an attack on the news outlet? An attack on Christmas? Both? Neither?

The man charged with the crime, who was released without bail last week and is due back in court Jan. 4, is reportedly homeless and told investigators he was thinking of burning the tree down “all day long.” But why? No motive is known, and witnesses have detailed other cases of the man demonstrating strange and erratic behavior.

The AllSides team engages in constant open dialogue between diverse perspectives. Because our team contains people from across the political spectrum, this often leads us into deep conversation — sometimes frustrating, but always insightful. This story, and the questions of why it happened and what it means, prompted one of those talks.

After an AllSides staffer mentioned the story to the rest of the team, we struck up a virtual conversation about media bias, the meaning of symbols, and the war on Christmas (and if there is one).

Here is that chat (which occurred over Slack), edited for brevity, followed by some additional reflections from the team:

The War on Christmas is escalating lol: https://www.cbsnews.com/news/christmas-tree-fire-fox-news-craig-tamanaha-arrested/

Someone set a Christmas tree on fire in Oakland, California too. Sad!

On a serious note, I suspect there's a property/life value thing going on here. To many on the left, the burned tree is just a replaceable thing. But to the right, the damage is perceived as more severe. Julie and I discussed something similar in our Instagram Live about the Kyle Rittenhouse trial.

Joseph is absolutely right. For Christians, this could be seen as a symbolic and serious desecration of a sacred holiday.

Burning a Menorah (to the ground) certainly would be perceived as having some hate-crime elements to it, in my opinion.

I don’t think a Christmas tree is an exclusively religious symbol, where a Menorah definitely is. I know a lot of non-religious people who celebrate Christmas.

I somewhat agree with Antonio. I think that burning down a nativity scene, for example, would be a lot worse than a Christmas tree.

This might also have something to do with dominant culture, like “punching up” - aka taking a shot at the dominant culture, in this case Christian culture.  I’m not sure, but I hear what Antonio and Andrew are saying.

Agreed. At first glance, I assumed this to be someone saying "screw Fox News" rather than “screw Christmas." Of course, it could be both, or perhaps neither. But the right definitely feels like Christmas and Christian values are under attack, so I definitely see the perspective Julie described as well.

Me too. It seems to me that Fox is hated, not Christmas. Although, there was the other tree Julie mentioned that was burned down in Oakland…

That is interesting because I saw Fox News report on it during their show that morning. Essentially they were asking, "why would someone burn down a Christmas tree? Why attack something that is supposed to unite people and is a sign of Christian and Jewish faith?" I assume that news outlets across the spectrum are covering it differently.

I did also initially see it as a "screw Fox" thing, but there was also the (underreported) news story of the multiple churches being burned in Canada over the summer, and then Notre Dame, which seemed to warrant no further investigation from the press after it happened...

I also noticed how the original articles on this incident used passive voice, not ascribing a human agent. One headline from the Washington Examiner (Lean Right bias) stated "Christmas tree engulfed in flames". It probably makes sense for reporters to do that when a cause isn't initially known, but sometimes it can be used to obscure the truth or that someone is guilty.

Some team members wanted to clarify or add to their original thoughts from our Slack conversation:

Joseph: This story is a great example of us getting too wrapped up in politics to see reality. What happened here? An unhoused man on the streets of New York City — who was potentially in a bad place mentally, given his alleged recent incident outside the Ghislane Maxwell trial — went up to Fox News’ artificial Christmas tree — also on the street and accessible to the public — and set it on fire. No one got hurt, the man was arrested, and the tree was replaced the next day.

But here at AllSides, where everything is about politics, it couldn’t just be that. Did this man hate Fox News? Christmas? White People? Was this man a part of an international movement to burn churches and hate crime Christians? Fox News seemed to think so, covering the fire for 36 hours after the incident. But in the end, the fact is that there are a lot of people in the world, especially in NYC, and sometimes they do crazy things. It happens. The important lesson here isn’t that there’s a simmering hatred for Sean Hannity or Santa Claus. It’s that sometimes we all need to log off and touch some grass.

Antonio: I don’t view a Christmas tree as an exclusively religious symbol, where a Menorah definitely is. There are plenty of non-religious families who embrace Christmas as a cultural celebration rather than a faith-based holiday. Fox News has played a critical role in sensationalizing the so-called “War on Christmas”. It’s still not clear why this man burned down their Christmas tree, but maybe his action was more of an attack on the news network’s polarizing agenda rather than the holiday itself. Either way, we shouldn’t allow the criminal actions of one individual to speak for an entire subculture of people.

It will be interesting to hear about the motive behind burning the Christmas tree, if it is ever made public. Was it the intent of the arsonist to burn the largest Christmas tree they could find? Or was the intent to make a display right outside the Fox News building, and the opportunity presented itself? Our perception of the vandalism may be clouded by our biases on the topic.

Julie: While it’s true that Christmas has been secularized by many, the holiday is fundamentally, historically, and traditionally Christian. Yet over the past few years, when we have seen Christian symbols and relics vandalized, there has been a lot of media silence, and very little investigation as to perpetrators’ potential motives. For instance, those of us in the U.S. have heard little about the investigation into the burning of Notre Dame, the burning of churches in Florida and California during the BLM riots, the vandalization of Virgin Mary statues in Boston, New York City and Tennessee during that same time, the burning of 10+ churches in Canada in summer 2021, and as mentioned above, the burning of a Christmas tree in Oakland, CA just over a week ago. I wonder if we’ll hear any follow-up from the press about these incidents.

Have feedback or thoughts on this discussion? Email us!

The Slack conversation was edited for brevity by Managing Editor Henry A. Brechter (Center bias).