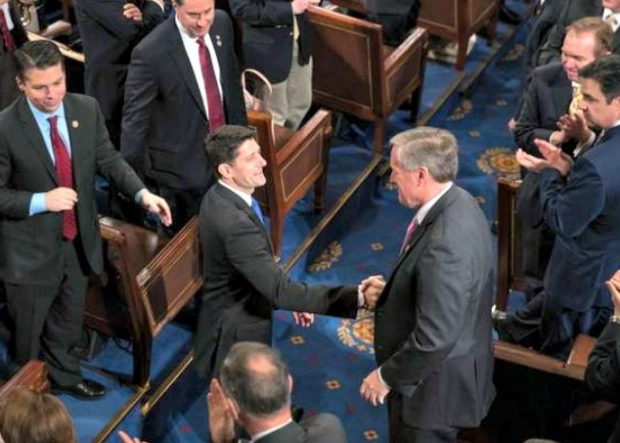 The US House of Representatives voted to pass the AHCA, moving the GOP one step closer to repealing and replacing Obamacare. The bill's initial version failed to pass following a contentious struggle among conservatives, but the addition of the MacArthur Amendment helped woo skeptical Republicans. It will now go to the Senate, where it has not yet garnered full support across the GOP.

Know a student or teacher in high school or college? Have them try our new "Mismatch" pilot school program. We are developing a new service that matches students with peers from other schools across the country with different political and socioeconomic backgrounds. But instead of going on a date, they have a structured, civil conversation via video conferencing to learn how to listen to and appreciate each other, especially when they disagree. Please email us to participate.

Snippets from the Right
House Smashes Obamacare
Breitbart
"The vote comes after a tumultuous process for the bill, which has seen previously scheduled votes pulled after Speaker Paul Ryan failed to accumulate enough Republican support. Speaker Ryan received widespread criticism after drafting the bill in secret and retaining many parts of Obamacare. Pundits dubbed the original bill, “Ryancare.”
House Freedom Caucus chairman Rep. Mark Meadows (R-NC) stepped up and brokered a revised version of the bill, known as the MacArthur amendment, along with Tuesday Group co-chairman Rep. Tom MacArthur (R-NJ). The addition of the amendment collected enough Republican votes to pass the bill.
...
Meadows told Breitbart News, 'I fully expect that we will repeal most aspects of Obamacare by the end of May. It may have been a deterrent in the first 100 days, but by the end of the first 120 days or so it will be seen as a significant accomplishment. It’s not how you start, it’s how you finish, as the as song used to say. We will have an excellent finish.'”
Snippets from the Center
House approves Obamacare repeal bill
Politico
"The plan, the American Health Care Act, was approved mostly along partisan lines, 217-213, with just one vote to spare. No Democrats backed the bill, and a slew of Republicans opposed it as well.
...
The AHCA would slash Obamacare's taxes, phase out its generous Medicaid expansion, cut down on its tax credits and — thanks to some last-minute maneuvering to win conservative support -— allow states to opt out of many of Obamacare's protections and coverage requirements."
...
One daunting reality for lawmakers reluctantly backing the bill is the near-certainty that many of its most controversial provisions could be dropped by the Senate, leaving only House members on the hook for the political costs. Senate Republicans have signaled little interest in the House version of the bill."
Snippets from the Left
House OKs GOP health bill, a step toward Obamacare repeal
Washington Post
"Relieved Republicans muscled their health care bill through the House Thursday, taking their biggest step toward dismantling the Obama health care overhaul since Donald Trump took office. They won passage only after overcoming their own divisions that nearly sank the measure six weeks ago.
Beaten but unbowed, Democrats insisted Republicans will pay at election time for repealing major provisions of the law. They sang the pop song “Na Na Hey Hey Kiss Him Goodbye” to the GOP lawmakers as the end of the voting neared.
The measure skirted through the House by a thin 217-213 vote, as all voting Democrats and a group of mostly moderate Republican holdouts voted no. A defeat would have been politically devastating for President Trump and Speaker Paul Ryan, R-Wis."
Discover more on this topic on AllSides.
Tags:
Healthcare
AHCA
Story of the Week
News