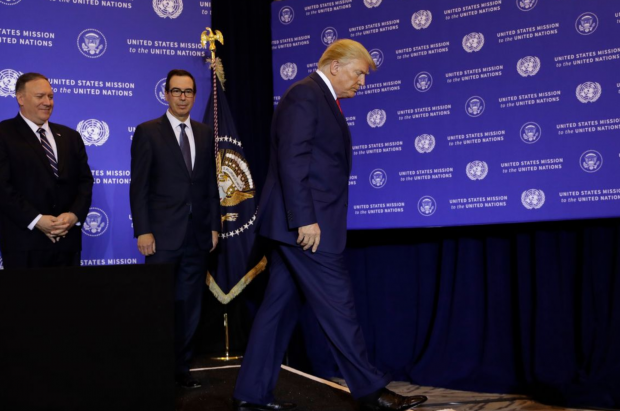 Speaker Nancy Pelosi announced the start of a formal House impeachment inquiry into President Donald Trump on Tuesday afternoon, saying "the actions taken to date by the president have seriously violated the Constitution."

The announcement followed scrutiny of a July 25 phone call between Trump and Ukrainian president Volodymyr Zelensky, in which Trump asked Zelensky to look into corruption allegations against former Vice President Joe Biden.

Impeachment coverage has absorbed the media world throughout the week. Voices on all sides of the political spectrum have deemed Trump's actions inappropriate, and some right-leaning pundits now consider impeachment probable. Some on both sides, especially the right, have downplayed the inquiry, instead focusing coverage on impeachment's technical unlikelihoods and Biden's Ukraine connections.

"Mr. Trump’s strategy to convert his latest controversy into a political advantage has been to take the unprecedented step of declassifying—and releasing—a document detailing a private discussion with a foreign leader, corralling Republican allies to coordinate his defense and blasting out urgent fundraising emails and text messages seeking donations as a show of support."

"Democrats were more measured about the political ramifications. Some who publicly back impeachment privately fear it could backfire should the House vote to impeach and then Mr. Trump be acquitted by the Republican-controlled Senate ahead of the election. Other Democrats were more optimistic."

"The idea of impeachment was initially a negative for stocks, which sold off Tuesday as investors anticipated Pelosi’s 5 p.m. announcement. Stocks were mixed in early trading Wednesday but came off lows when a memo of Trump’s conversation with Ukraine’s president did not show that Trump threatened to withhold aid from Ukraine."

"J.P. Morgan analysts said the impeachment effort potentially presents the market with several wild cards — the U.S.-China trade war; U.S.-Iran relations and implications for the 2020 presidential and senate elections. Because Trump’s comments and behavior on the trade front have been so influential on the market, the ups and downs of the impeachment inquiry could also show up in the prices of stocks and other assets that move on trade-related headlines."

"This is not a partisan observation, as I’ve repeatedly said and written that the media coverage of Trump is relentlessly negative and often unfair. And as I noted yesterday, the press has so badly overhyped so many Trump controversies, large and small, that there is a collective numbness to the latest cries of scandal. But now that we have the transcript of the July call, it’s clear that the Wall Street Journal and Washington Post reports were largely accurate. It was not, as the president said yesterday, a “nothing call.”"

"As the pundits parse the call, this is ultimately not a legal question. High crimes and misdemeanors is whatever a majority of the House says it is. Pelosi may come to regret unleashing these forces, since polls show that impeachment remains unpopular with a majority of the country."

Why Pelosi and her party finally embraced impeachment

"For the Democrats who had been pressing for an impeachment probe for months — at times experiencing Pelosi’s wrath along the way — the speaker’s words were stunning. Just a week before, those very same Democrats were privately lamenting that their campaign to impeach Trump was quickly running out of time after several attempts to win public support had failed to materialize."

"Furious with Trump’s stonewalling — and the missed opportunity to hear from special counsel Robert Mueller’s star witness — a few members of Pelosi’s leadership team clashed with her privately over the issue and were now getting ready to break with the speaker and openly call for impeachment proceedings against the president."

Trump lashes out at Democrats as whistleblower complaint is made public

"A redacted version of the complaint was made public on Thursday morning. It claims not only that the president misused his office for personal gain, but that unidentified White House officials tried to hide that fact."

"In the course of my official duties, I have received information from multiple U.S. government officials that the President of the United States is using the power of his office to solicit interference from a foreign country in the 2020 U.S. election,” the whistleblower wrote in the complaint dated Aug. 12. “This interference includes, among other things, pressuring a foreign country to investigate one of the President’s main domestic political rivals. The President’s personal lawyer, Mr. Rudolph W. Giuliani, is a central figure in this effort. Attorney General (William P.) Barr appears to be involved as well."

Trump is already fundraising off impeachment

"The fundraising appeal claimed that Trump had personally requested to see a list of people who had joined his “Official Impeachment Defense Task Force” and urged donors to send their money before 3:30 p.m., when the list would supposedly be sent to the president. Shortly after the deadline passed, Trump’s campaign sent a nearly identical email, this one saying the deadline was 4 p.m."

"Donor match programs are common in the nonprofit fundraising world and are considered to be highly effective in encouraging donors who might be on the fence about giving. In the nonprofit world, a match program typically involves a one or several particularly generous donors, who are poised to write big checks if smaller donors start giving. However, in the political sphere, federal campaign finance laws make things a little more complicated, since individual donors are legally capped at giving no more than $5,400 to a campaign per election cycle."

"Maguire has come under fire from Democrats for initially withholding a copy of the complaint from lawmakers. That standoff was resolved when the complaint was declassified, and released to the public, in advance of the hearing. But Maguire was still pressed for answers from Democratic committee members on why his office did not hand over the complaint at first."

"The White House, on Wednesday, released an unclassified version of the transcript of that highly controversial phone call. The memo, which does not reflect a “verbatim transcript” but is based on “notes and recollections” of those memorializing the call, shows Trump congratulating Zelensky on his election victory before Trump eventually gets to the subject of the Bidens, seeking an investigation of some kind."

"President Trump did not press Ukraine’s president for an investigation of Democratic front-runner Joseph R. Biden and his son in return for a promise of military aid, according to a transcript of their July phone call released Wednesday by the Justice Department."

"House Democrats announced a formal impeachment inquiry Tuesday based on their suspicions that Mr. Trump tried to pressure the Ukrainian leader into investigating the Bidens by withholding $391 million in military aid last summer. House Speaker Nancy Pelosi said Mr. Trump had committed a “betrayal” of the Constitution. The president and his team say Mr. Biden’s son, Hunter, should be investigated for receiving $3 million from a Ukrainian energy company while his father was serving as vice president."

"A former advisor to Republican Utah Sen. Mitt Romney claimed Wednesday that support among GOP senators to impeach President Donald Trump is high — with 30 allegedly willing to vote with Democrats in “a secret vote.”"

"Murphy, also a Republican strategist who worked closely with the late Republican Arizona Sen. John McCain, said the transcript of a July telephone call between Trump and his Ukrainian counterpart “was a much clearer incident than the Mueller report information.” He argues it shows Trump linking antitank missiles with an investigation of former Vice President Joe Biden and his son, Hunter Biden."