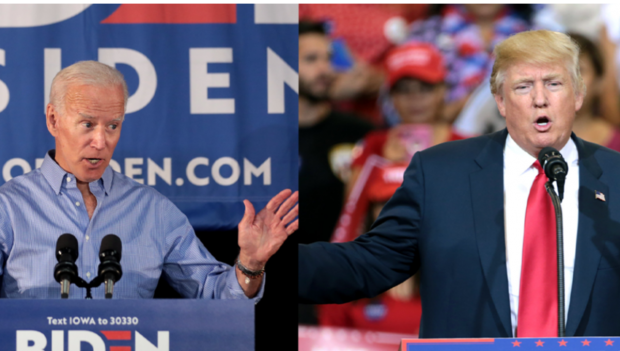 You've seen and compared coverage leading up to the debates from across the political spectrum. Now, let’s compare what candidates and their campaigns have said about the debate, the rules, the moderator and each other.

To Debate or Not to Debate?

Trump has previously accused Biden of trying to get out of the presidential debates, criticizing him for not holding many in-person campaign events during the pandemic and accusing him of reading off of a teleprompter during recent interviews. There’s no hard evidence of Biden saying he doesn’t want to debate.

Biden has never publicly opposed debating Trump, and has expressed an eagerness to participate. Other Democrats, including House Majority Leader Nancy Pelosi, have advised Biden to avoid the debates.

Trump recently praised Biden’s debate skills, and Trump campaign staffers have done the same, saying they expect Biden to perform well. Trump said at a campaign event last week, “We have a debate coming up and who knows ... you know what, he's been doing it for 47 years. I have been doing it for 3 1/2 years so he should be able to beat me, I would think. He's much more experienced. He's great.” Previously, Trump criticized Biden for purported inattentiveness in Democratic primary debates, and has suggested Biden used performance-enhancing drugs during them. He also said he’ll call for Biden to complete a drug test before Tuesday’s debate.

Biden has said he’ll try to serve as a fact-checker on Trump during the debate. He called Trump “completely tasteless,” and said he’ll try to avoid being “baited into a brawl” with him. "The people know the president is a liar," Biden said in an interview Saturday. "He doesn't know how to debate the facts, because he's not that smart." He’s also called Trump’s drug use accusations “foolish,” and questioned Trump’s mental state in a recent interview, saying “He doesn’t appear to be cognitively aware of what’s going on.”

Multiple reports have emerged on Trump’s debate preparation. Some coverage says the president met with close advisers to strategize for the debates with Biden; more recent reports from some left-rated media outlets say the president has done no formal prep. Trump communications director Tim Murtaugh told CBS News that “The president prepares by being president. And by regularly facing hostile news media. That's pretty good practice by any measure." Trump said Sunday, "You know, what I do is debate prep. Every day, I'm taking questions from you people over time."

Media coverage of Biden’s specific preparation tactics have noted how the former vice president and his campaign are focused on studying Trump’s tweets and frequent press conferences. Biden deputy campaign manager Kate Bedingfield said Thursday, “In terms of what [Biden] is doing for debate prep, he is preparing for the debate. And he's looking forward to being on stage with Donald Trump next week to lay out his vision for the country and to hold Donald Trump accountable for the ways in which he has failed this country.”

The debate begins at 9 p.m. ET, and will last 90 minutes with no commercial breaks. It will cover six topics — the coronavirus pandemic; race and violence in cities; the economy; election integrity; the Supreme Court; and Trump and Biden’s individual political records. The moderator and candidates will spend 15 minutes on each.

The Trump campaign reportedly asked the Commission on Presidential Debates (CPD) to allow both candidates to appear onstage together. It’s not clear if the request will be granted — the CPD has said it will follow CDC guidelines on COVID-19 public safety precautions.

Trump urged the CPD to schedule an additional fourth debate in early September, but was turned down. Biden’s campaign opposed Trump’s suggestion that a fourth debate be held, calling it an attempted distraction.

Fox News anchor Chris Wallace will moderate Tuesday’s debate. He served as moderator for the final Trump-Clinton presidential debate in 2016.

Trump has publicly criticized Wallace in the past, and said in a recent interview that he “would be willing to bet that he won’t ask Biden tough questions,” and that “he will be controlled by the radical left.” Trump sat down with Wallace for a one-on-one interview in July to discuss the coronavirus pandemic and the 2020 election.

Biden’s campaign denied Wallace's request to hold a similar interview with the former vice president over the summer; Wallace interviewed Biden in the context of the Democratic primary race in March.

After the CPD announced the moderators, Murtaugh said, “These are not the moderators we would have recommended if the campaign had been allowed to have any input. Some can be identified as clear opponents of President Trump, meaning Joe Biden will actually have a teammate on stage most of the time to help him excuse the radical, leftist agenda he is carrying. One thing is sure: Chris Wallace’s selection ensures that Biden will finally see him face-to-face after dodging his interview requests. That is, if Biden actually shows up.”

Biden campaign spokesman Andrew Bates said after the announcement, "As Joe Biden has said for months -- without farcical antics -- he looks forward to participating in the debates set by the commission, regardless of who the independently chosen moderators are."

This piece was written by AllSides Managing Editor Henry A. Brechter. He has a Center bias.