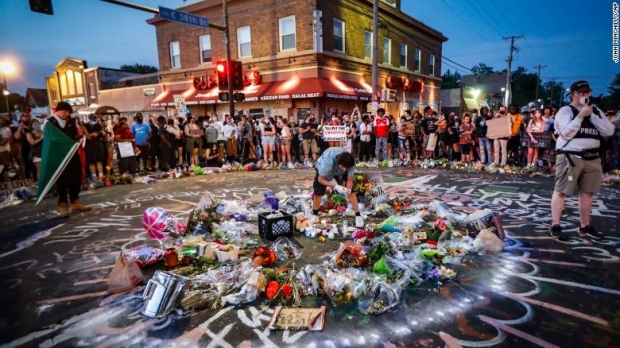 George Floyd's death after a police officer knelt on his neck for more than eight minutes last week has sparked massive civil unrest and outcry against police brutality, racism and criminal justice failures.

The protests, demonstrations and riots following Floyd's death have commanded the nation's attention. The now-former cop who knelt on Floyd has been charged with second-degree murder, and three cops who were present during the detainment were also fired and charged with aiding and abetting murder.

In the media, many voices from left to right have offered divided looks at the state of racism in the U.S., the need for justice reform, and how President Donald Trump and the rest of the government have responded to the crisis.

Other big news this week: Debates emerged on the role of police; the use of the military during civil unrest; the effectiveness of rioting and the existence of racism in policing.

On the Blog: The former president of CBS News said the media needs to overtly embrace its political bias — something we at AllSides have been advocating for years – but he may be wrong that unbiased news is commercially unviable.

"What happens when a police officer is accused of misconduct or brutality? That depends on where you live. In more than a dozen states, police enjoy their own Bill of Rights, which could mean if an officer is investigated, he or she does not have to answer any questions for up to 10 days, and the department still has to pay salary and benefits."

"A contributing factor to excessive use of force by police is the increasing militarization of many police departments. For decades, the Defense Department has been passing surplus military equipment to local law enforcement agencies—for free and with little scrutiny. Think grenade launchers, machetes and bayonets. Many of the military-grade weapons were deployed in Ferguson, where police used weapons of war against protesters."

"Hoaxes, conspiracy theories and other falsehoods like these are spreading on Facebook and Twitter following Floyd’s death in police custody in Minneapolis. Bad actors exploit large-scale events dominating the national conversation to sow chaos and fear and deepen distrust and division, disinformation experts say. In this case, they’ve seized on America’s rawest political division – race – and the growing furor over police brutality to hijack protests across the country. "

What U.S. police are shooting at protesters

"Police across the United States are using a variety of weapons on protesters as demonstrations against the police killing of George Floyd intensify. Often described as “non-lethal,” these weapons include tear gas, pepper spray and rubber bullets. They have sometimes seriously injured protesters."

"Police have shot protesters with pepper spray both from handheld devices and projectiles. While pepper spray is chemically distinct from tear gas, it produces similar effects: burning and watering of the eyes and skin. Police have also fired pepper balls, small projectiles containing chemical irritants. Such projectiles can contain PAVA spray, an irritant similar to pepper spray, as well as CS gas. The balls can be shot from launchers or modified paintball guns."

'All the world is watching': After nationwide protests, 4 ex-officers face new charges in George Floyd's death

Why these protests are different

"We have seen uprisings over racism and police brutality before, the most famous being the civil rights movement of the 1960s. There was sometimes a sense that those uprisings had brought on a great deal of progress in a short period and that the eradication of systemic racism would be a long-term project from then on out, with incremental changes ensuring the arc of the moral universe bent toward justice. The recent protest movement — though nascent — seems to reject that idea. The protesters want change now."

"The realities of illness, unemployment, polluted air and water, unequal access to education, and mass incarceration — compounded with the fear of being killed by one of your fellow Americans or by a mysterious and still unchecked disease — has life feeling particularly fragile and the world particularly dire. Many are fed up. They need to direct their rage. They cannot live and suffer any longer as they once felt they had to."

No More Money for the Police

"As the case of George Floyd makes clear, calling 911 for even the slightest thing can be a death sentence for black people. For many marginalized communities, 911 is not a viable option because the police often make crises worse. These same communities, who often need emergency services the most, are forced to make do without the help."

"The solution to ending police violence and cultivating a safer country lies in reducing the power of the police and their contact with the public. We can do that by reinvesting the $100 billion spent on policing nationwide in alternative emergency response programs, as protesters in Minneapolis have called for. City, state and federal grants can also fund these programs."

"To say this is a dark time for America feels like an understatement. Processing it all has been impossible. I readily use my voice to speak out, my pen to call out, but I’m not too proud to admit that I’m struggling with what to say. I’m gutted. Flattened. Heartbroken. But what could someone like me — white, privileged, employed, safe — say that will mean anything? Change something? Help anything?"

"If I’m truly the ally I say I am to my friends who are hurting, grieving, crying out for help, then my voice isn’t the one that matters at all right now. Theirs is. So instead of speaking here, I will listen. I’ll listen harder than I ever have before. I’ll listen to black voices, protesters, activists and community leaders who have been in these trenches for years, decades, centuries. I’ll listen when they speak, and I’ll listen just hard when they speak in silent protest."

The Myth of Systemic Police Racism

"This charge of systemic police bias was wrong during the Obama years and remains so today. However sickening the video of Floyd’s arrest, it isn’t representative of the 375 million annual contacts that police officers have with civilians. A solid body of evidence finds no structural bias in the criminal-justice system with regard to arrests, prosecution or sentencing. Crime and suspect behavior, not race, determine most police actions."

"In 2019 police officers fatally shot 1,004 people, most of whom were armed or otherwise dangerous. African-Americans were about a quarter of those killed by cops last year (235), a ratio that has remained stable since 2015. That share of black victims is less than what the black crime rate would predict, since police shootings are a function of how often officers encounter armed and violent suspects. In 2018, the latest year for which such data have been published, African-Americans made up 53% of known homicide offenders in the U.S. and commit about 60% of robberies, though they are 13% of the population."

"It’s unconscionable to see the attorney general of Massachusetts, the top law-enforcement officer in her state, say, “Yes, America is burning, but that’s how forests grow." Riots may excite the keyboard revolutionary, but they won’t bring racial equality. The opposite, in fact. Not only are the anarchists who burn and loot stores subjecting many of their neighbors to a dehumanizing experience, they are destroying poor and minority neighborhoods."

"Big businesses might be able to afford to fix the smashed windows and ransacked supply room, but family-owned ones are going to struggle. Chain stores have insurance, but the individuals and smaller manufacturers who depend on them for their livelihoods also are threatened. The big stores themselves will be paying higher insurance rates, and some of them may decide to never come back to these poorer neighborhoods. Because the forest doesn’t always grow back."