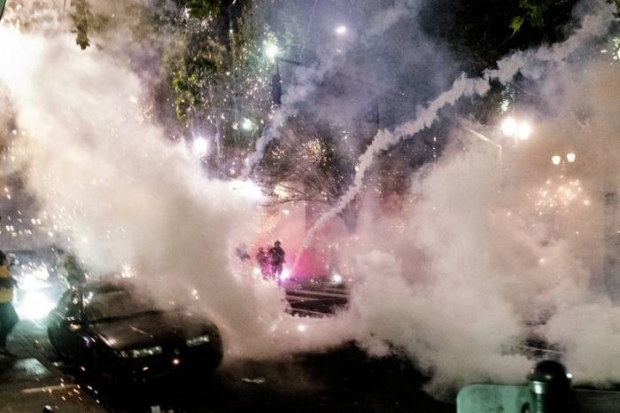 Since the death of George Floyd, protests in Portland, Oregon have reportedly caused damage to federal property, prompting the Department of Homeland Security (DHS) to send federal officers to the city. Those reports were followed by claims of protesters being apprehended and put into unmarked vans as demonstrations purportedly turned violent.

On Wednesday night, Portland Mayor Ted Wheeler met with protesters in front of a federal courthouse, where he was met by jeers and calls to resign when he told a protester that he didn't support abolishing the police department. Later that night, Wheeler could be seen in various videos coughing in the midst of a tear-gassed crowd.

Perspectives emerged across the spectrum regarding the alleged anarchy from protesters and the Trump administration's purported promotion of a police state. Left-leaning outlets were more likely to focus on the allegedly unlawful detainment of protesters, with some voices framing the accounts of police brutality as unconstitutional and examples of authoritarianism. Many also highlighted the 'Wall of Moms' and other reportedly peaceful demonstrations in Portland. Coverage from right-rated outlets was more likely to concentrate on alleged crimes committed by the protesters and numbers showing a rise in crime during the protests. Some right-rated voices also focused on the legality of sending DHS officers to the city to protect federal property.

Other big news this week: Technology, healthcare and other industries could reportedly suffer worker shortages as a result of the Trump administration suspending the issuance of high-skilled foreign worker visas; President Donald Trump released a memorandum Tuesday seeking to exclude people who are in the U.S. illegally from being counted in the upcoming 2020 census; as China expands naval operations, the U.S. ordered China to close its Houston consulate over national security fears after two Chinese hackers were charged with allegedly trying to steal coronavirus vaccine data; the nation remembered the lives of civil rights leaders Rep. John Lewis (D-Ga.) and C. T. Vivian, who both passed on Friday; whose classes moved fully online; and as back-to-school season approaches, public officials, health experts and educators weigh in on the debate surrounding in-person classrooms.

On the Blog: We spotted a couple stories worthy of a Media Bias Alert this week: left and right media portrayed the Texas coronavirus spike in July differently, and the Colorado ban on panic defense went uncovered by major news media.

Portland standoff: State asks federal agents to be reined in

"The lawsuit is part of a growing pushback against the Trump administration’s use of federal agents in Portland and its plans to do the same in other cities that is deepening the country’s already considerable political divides. Democratic mayors of 15 cities condemned the use of the agents in a letter to the attorney general."

Were Portland Protesters ‘Kidnapped’ by Federal Officers in Unmarked Vans?

"U.S. President Donald Trump had directed federal agencies to deploy officers in cities including Portland, Oregon, in summer 2020, and at least some of those agents used unmarked vehicles during the security initiative...the use of the word "kidnapping" alleges that federal agents had committed a crime; however, no court or judge had said that was the case as of this writing. In at least one case, federal officials said they put someone in an unmarked van for questioning because they believed that person had committed a crime."

A 'very dark history': Oregon's racist past fuels protests against injustice in Portland

"A predominantly white city tucked away in the northwest corner of the USA hardly seems the logical spot to emerge as the new flashpoint of the protests against racism and police brutality that have raged across the country for nearly two months...For all the outrage and questions of constitutionality the federal action in Portland evoked, the demonstrations that began in the city shortly after the killing of George Floyd by Minneapolis police May 25 may be more deeply rooted in the state’s racist history than in recent events."

""Slower police response times for reported burglaries amid the ongoing nightly protests in Portland, Ore., have business owners concerned that criminals may feel emboldened to commit crimes as law enforcement resources are shifted to combat the demonstrations that have, at times, turned violent...The Portland Police Bureau responded to 473 burglaries in June, compared to 401 in June in 2017, 2018 and 2019, respectively, KATU-TV reported."

The Problem in Portland Isn’t the Law; It’s the Lawlessness

"Despite some occasional looting, chaos, property damage, trespassing, rioting, graffiti, assaults, arson, and general mayhem, the media consistently assures us that Antifa “protesters” are “largely peaceful.” And since the majority of buildings in Portland, Seattle, and Denver haven’t been looted yet, who am I to argue? Of course, it takes only a sliver of the population to transform downtowns into a mess and create quality-of-life issues for thousands of law-abiding citizens. And the mayors who surrender parts of their cities to left-wing “protesters” are tacitly endorsing lawlessness themselves.”

"Even if a judge orders federal agents to immediately stop their cloak & dagger approach, Trump may still be able to work around such an order, legal experts said. His administration has proved expert in slow-walking the judicial system and fighting rulings it doesn’t like."

"Trump's decision to send in DHS stormtroopers to Portland is anything but surprising. He's been telegraphing his intention to do this since the George Floyd murder sparked protests in the beginning of June. And let's be clear about the reasons. Trump doesn't care about American cities or statues or "anarchy" or any of the rest of it. He cares about getting re-elected, and since he doesn't know how to deal with the pandemic crisis, he figured he could use the Black Lives Matter protests to spark a white backlash that will carry him to victory."

Is Trump stretching the law to deploy federal police power in cities?

"One provision of a 2002 law that created the Department of Homeland Security says its secretary may “designate employees ... as officers and agents for duty in connection with the protection of property owned or occupied by the federal government.” They may “carry firearms ... conduct investigations on or off the property in question ... and make arrests without a warrant for any offense against the United States” if they have “reasonable grounds to believe the person to be arrested has committed a felony” under federal law. But legal experts also say federal agents in Portland appear to be going well beyond the authority to protect federal property."