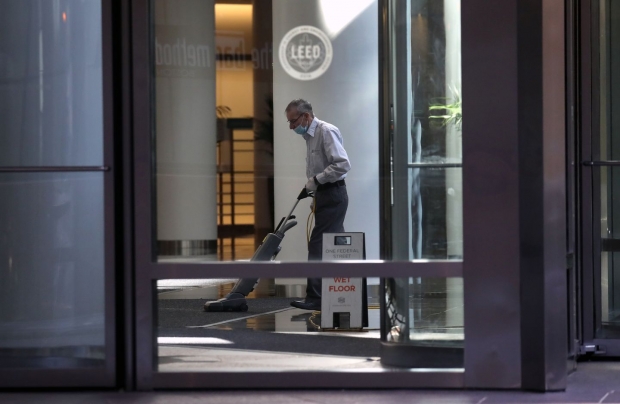 The need for economic activity is clashing with public safety concerns as the United States gradually moves to reopen safely amid the COVID-19 coronavirus pandemic.

Many news reports also focused on President Donald Trump's claim that Democrats are intentionally hindering economic recovery to hurt his reelection chances. Some left-rated reporting concentrated on concerns regarding premature reopenings; many right-rated voices have argued for the need to return to work, with most saying recent coronavirus data on testing and hospital capabilities backs them up.

On the Blog: Last weekend, the 'Plandemic' documentary went viral and was widely condemned by the media as containing multiple falsehoods. Should AllSides cover or censor potentially misleading information?

More from AllSides: In the face of the COVID-19 infodemic, AllSides created a Facts and Fact Checking portal, where you can see the latest fact checks on a variety of topics and issues.

"Experts appearing before the first hearing of a new COVID-19 panel agreed on several common strategies to use in decisions about reopening the economy, as lawmakers bickered over the format of the hearing itself. In the inaugural hearing by the Select Subcommittee on the Coronavirus Crisis, both parties emphasized the importance of taking steps to ease economic restrictions, albeit in different ways. Democrats have pushed for a more cautious approach, while some Republican-led states have been quicker to lift restrictions on businesses."

"Each of the five witnesses outlined specific recommendations to safely open businesses and ease economic restrictions. All agreed on the need to increase testing in order to open up safely. Another common theme was accelerating contact tracing, in which people who had contact with infected people are identified and warned."

"Fed Chairman Jerome Powell’s gloomy view of the economy has markets looking for more guidance on what the central bank will do next to help prop it back up. Some strategists believe the Fed could announce a new quantitative easing program of a set size or pace before or at its June 9-10 meeting. Quantitative easing was first used by the Fed during the Great Recession and became known as QE."

"Powell’s description of the economy was bleak, saying it caused “a level of pain that is hard to capture in words.” Powell also said a recovery is dependent on the virus, how long it will take to develop treatments and whether the economy can rebound despite the limitations of social distancing. It will also depend on whether there are new outbreaks."

"“To me it’s not an acceptable answer, especially when it comes to schools,” Trump told reporters at the White House when asked about [Dr. Anthony] Fauci’s warnings to senators on Tuesday about the risks of reopening the schools and economy too soon. Fauci, who directs the National Institute of Allergy and Infectious Diseases, also warned that a premature lifting of lockdowns could lead to additional outbreaks of the deadly coronavirus, which has killed more than 82,000 people in the United States and brought the economy to its knees."

"The president, who previously made the strength of the economy central to his pitch for re-election in November, has encouraged states to reopen businesses and schools that were shuttered to halt the spread of the highly contagious respiratory disease. Fauci, 79, a proponent of the lockdowns, has become a target for criticism from the American far right and online conspiracy theorists since he made statements about the outbreak that were at odds with Trump’s."

"The novel coronavirus pandemic has wreaked havoc on many areas in the United States, prompting nearly all states to issue stay-at-home orders and close businesses in an effort to stem the tide of the virus. But the ensuing, unprecedented economic shutdown has caused devastation of its own -- with some 33 million filing for unemployment, an economic contraction not seen since the Great Recession and businesses of all sizes scrambling to adapt and survive. It has also prompted calls to get the economy moving again -- raising the issue about how to do so safely as the virus continues to tear through the country."

"As 45 states, plus Puerto Rico, begin easing restrictions to some extent, no state has yet to see a decline in terms of new reported cases for 14 days in a row, according to an ABC News analysis, and questions remain about whether there will be a resurgence of the virus."

Saving lives or saving the economy? Reopening doesn’t have to be an all-or-nothing proposition

"Among the strategies: Maintain a stay-at-home advisory for seniors, and limit family access to nursing homes, because the elderly are most vulnerable to infection. Allow older employees to work at home even as younger colleagues return to the office. Permit more outdoor restaurant dining, because it’s safer than breaking bread indoors, and loosen restrictions on small social gatherings like backyard barbecues while still barring large crowds at concerts and sporting events."

"In any reopening, scientists and economists agree that testing, tracing, and social distancing measures are paramount in keeping the virus under control. Selective lockdowns and restrictions come with their own trade-offs: they are hard to implement, even harder to enforce, and the downsides may be difficult to offset. If the people over the age of 70, for example, need to be isolated for a prolonged period, will they need new services and programs? If an employer signals to older workers to stay home, is that a form of discrimination? If restaurants are restricted to outdoor dining or by capacity, how can businesses make money?"

Why reopening economies will be a 'massive experiment'

"Neither the global economy nor the US economy are reopening in a synchronized manner. That uneven progress could, for example, make it much harder for manufacturers that rely on materials from abroad to recover. On top of that, many economists expect people will be slow to resume everyday activities such as dining in restaurants and going to movies as they did before the pandemic. That lag will show up in the economic data as well."

"Fears of a second wave of infections are also threatening to slow recoveries, as South Korea and Germany, both of which are reopening their economies, have seen clusters of new Covid-19 cases emerge."

"White House economic adviser Larry Kudlow predicts a “big reopening” for the economy as the current stage in the battle against the coronavirus pandemic enters the “home stretch.” The veteran financial guru and former Ronald Reagan adviser said public safety goes “hand in hand” with economic growth. “I believe [we] will do both,” Kudlow told radio host Hugh Hewitt in a recent interview. “I think the president has been right to adopt the mitigation measures he had. I think the shutdown[s] did help bring the virus to heel,” said Kudlow, who worked as Reagan’s budget deputy between 1981 and 1985."

"Kudlow said 2021 could be a “very, very” good year for the economy. However, not everyone is as optimistic. Meanwhile, the head of the Federal Reserve warned on Wednesday of an "extended period" of weak economic growth, vowed to use the U.S. central bank's power as needed, and called for additional fiscal spending to stem the fallout from the coronavirus pandemic."

Trump says critics want him to keep economy closed until election: 'It's a political thing'

"President Trump, in an interview that aired Thursday morning with Fox Business Network's Maria Bartiromo, said he believes his political critics want a slower reopening of the economy not due to the coronavirus threat, but to hurt him politically in the November election. When asked if he thinks his political opponents want him to keep the economy closed going into the presidential election, Trump said he does. "Yeah, I do. I do. I think it's a political thing," Trump told Bartiromo."

""The president has been pushing to reopen the economy as quickly as possible, emphasizing the harmful economic effects of keeping businesses closed and people out of work, despite pushback from critics that he is essentially sacrificing lives to the economy. But Trump said...there are also likely to be health effects of keeping people under stay-at-home orders for such a long time."

Coronavirus experts can be wrong. We can safely reopen

"Whether it was justified or not, the objective has been accomplished. Throughout most of America, our hospital systems are no longer in danger of being flooded by coronavirus patients. My home state of Georgia now has the lowest number of patients hospitalized and the lowest number of ventilators in use since April 8. Even in hard-hit New York City, which has 185,000 COVID-19 cases alone, 26% of hospital beds and 21% of intensive care units are open. Our hospital systems have the capacity necessary to deal with the coronavirus."

"We can safely reopen the country and allow folks to return to work while continuing to practice smart health guidelines. Every day that we delay makes it more difficult to restore the economic prosperity we enjoyed just three months ago. Over 33 million hardworking Americans have filed for unemployment since mid-March. Americans and their employers are facing a tremendous difficulty. We cannot afford to wait. The sooner we begin taking steps on the road to recovery, the more prosperous the path will be for us all."

Story Of The Week, Economy And Jobs, Coronavirus, Public Health