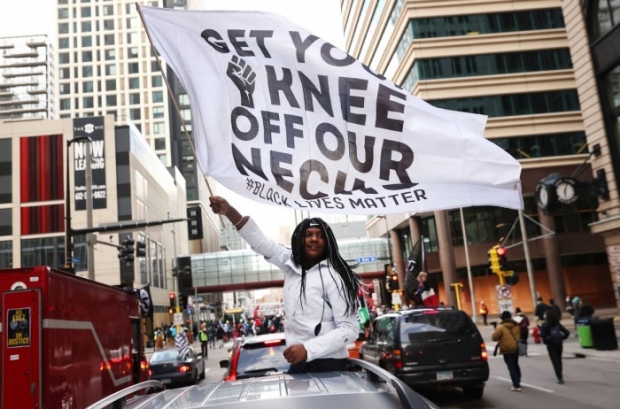 As a result of Chauvin’s trial, several cities saw celebrations. Businesses and law enforcement had prepared for potential unrest, and Florida Gov. Ron DeSantis signed an anti-riot bill Monday. A day after the trial, Attorney General Merrick Garland announced the Justice Department will investigate the policies and operations of the Minneapolis Police Department. The defense is considering an appeal for Chauvin, considering the wide publicity the trial has received, the defense's request to move the trial, and the potential bias created after Rep. Maxine Waters (D-California) and President Joe Biden made statements about the trial before the verdict was released. White House Press Secretary Jen Psaki said Wednesday that Biden would take up police reform issues with Congress next week.

Perspectives: "When it comes to politics and cultural issues, the internet is broken." Watch AllSides' CEO John Gable talk about the founding of AllSides for The Reunited States' Everyday Heroes series; On April 14, President Biden announced he would end the war in Afghanistan, after President Trump said he would withdraw troops during his term. Was the media biased in its coverage of both stories?; Did the New York Times spread disinformation about a Capitol officer's death? We took a look at the media coverage of the medical examiner’s ruling this week to see how outlets differed.

More from AllSides: AllSides hiring a Web Design and Development Intern. Join our team!; Sick of "fact checks" that aren't really just checking the facts? Use our Facts and Fact Checking portal to compare facts, fact-checking and analysis from across the spectrum; Download the AllSides mobile app for balanced news on the go. Available for iOS and Android; and you can support our work and mission by becoming a sustaining member of AllSides. Sustaining memberships allow you to read AllSides ad-free.

"Derek Chauvin's murder conviction was met with widespread approval among those seeking justice for George Floyd, but the trial's outcome may not be set in stone thanks to remarks from influential political leaders such as Rep. Maxine Waters, D-Calif., and President Biden himself."

America's Streets Are Spared, But Was Justice Done in the Chauvin Trial?

"I found reasonable doubt dripping from multiple layers of the case against Derek Chauvin. A unanimous jury verdict to the contrary does not change my mind in the least. However, I am now tasked with how to process this result as relief and celebration spread across the land, amid talk of healing and renewed faith in our system among those who had grown distrustful."

"Despite the widely circulated video capturing Derek Chauvin choking the life out of George Floyd on a Minneapolis street last May, it was never clear that the former police officer would be convicted of anything, let alone murder. Despite increasing attention to police violence, particularly against Black Americans, it’s still vanishingly rare for officers in the U.S. to be charged, let alone convicted."

The law delivered justice to George Floyd. America's political leaders are up next

"But the moment when Chauvin was led to a jail cell, hands cuffed behind his back, triggered relief and, in places, disbelief. It validated a social and political movement, championed by celebrities and athletes, that spanned the globe after Floyd's murder last May that sent citizens of all ethnicities into the streets during a pandemic to demand justice."

Did Nancy Pelosi Thank George Floyd for ‘Sacrificing’ His Life?

"Because Chauvin was not charged with first-degree murder, he is eligible for appeal, which must be filed by his defense attorneys within 90 days of Tuesday's jury verdict. The Minneapolis jury found Chauvin guilty on count one, unintentional second-degree murder, Count two, third-degree murder, perpetrating an eminently dangerous act, and count three, second-degree manslaughter, culpable negligence on Tuesday afternoon. Deliberations began one day prior and sentencing is set to take place in eight weeks, Judge Peter Cahill said."