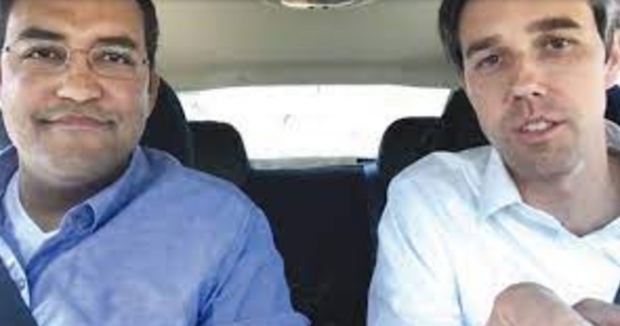 Hurd (left) and O'Rourke on the road.

Divisions in Washington, D.C. can seem bitter, so it can be helpful to remember more positive bipartisan experiences that began only a few years ago and continued afterward.

A two-day road trip made by two Texas congressmen from different political parties from San Antonio to Washington, D.C. in March of 2017 gained wide online popularity. Will Hurd and Beto O’Rourke drove the 1,600 miles together. Their goal was to make it in time for votes after their flights were canceled during a snowstorm.

O'Rourke and Hurd nicknamed their trip the Congressional Cannon Ball Run.  They popularized their trip by live-streaming on Facebook. Hundreds of thousands of viewers saw them as they sang, ate, asked and answered policy questions, and listened to suggestions from their followers and from some members of Congress. Constituents gained access to the two, and the pair received messages from various other members of Congress.

Considered a popular and well-documented “bromance,” Hurd and O'Rourke both said that they had more affection and understanding for each other than before they began the trip.

O’Rourke said more than a year later, “In Will, I have found not just a very good friend but a partner...We'll vote differently on some significant issues but we will find the common ground."

They would sit together as seat buddies, a tradition started in 2011 by Senator Mark Udall.[1]

During his December 8, 2020 farewell speech in the U.S. House of Representatives, San Antonio Representative Will Hurd advised, "Don't treat bipartisanship like a four-letter word. The only way big things have ever been done in this country is by doing them together."

During a 2021 radio interview in El Paso, O'Rourke explained his belief in working with all Americans be it "a Republican, an Independent, a Democrat – the partisan part of this I don't care about."

Hurd was the only African American Republican in the House of Representatives before retiring in 2021. (Two others were elected in 2020.) O’Rourke served as a Democratic representative before he was a candidate for election to the Senate and sought the nomination for President of the United States.

They both denounced the violence by the group of Americans who stormed the Capitol complex on January 6, 2021.

O'Rourke characterized the move as an attempt to change the social "norm" where "the loser concedes" in order to have a peaceful transfer of power after an election. He continued that democracy is extraordinary. 55 years earlier, the Voting Rights Act improved it, and he did not want to see backsliding.

According to Hurd, those who breached the Capitol attempted to mimic the politics of "dangerous places."

Yet Hurd’s words in particular also capture their hope for the future. Just as O’Rourke’s and Hurd’s friendship suggested possibilities of a more united and bipartisan future, Hurd said the following about the breach of the Capitol: “This is going to be an opportunity for everybody to step back and realize that way more unites us than divides us as a country and expect our leaders to use their words to inspire."

This piece was reviewed by James Coan (Center bias). It was edited by AllSides Managing Editor Henry A. Brechter (Center bias). Correspondence can be directed to james@allsides.com.

[1] Udall urged lawmakers to abandon the traditional partisan seating arrangement during Obama's speech. Udall wrote in a letter to Congress, "On the night of the State of the Union address, we are asking others to join us - House and Senate members from both parties - to cross the aisle and sit together.  We hope that as the nation watches, Democrats and Republicans will reflect the interspersed character of America itself.  Perhaps by sitting with each other for one night we will begin to rekindle that common spark that brought us here from 50 different states and widely diverging backgrounds to serve the public good."