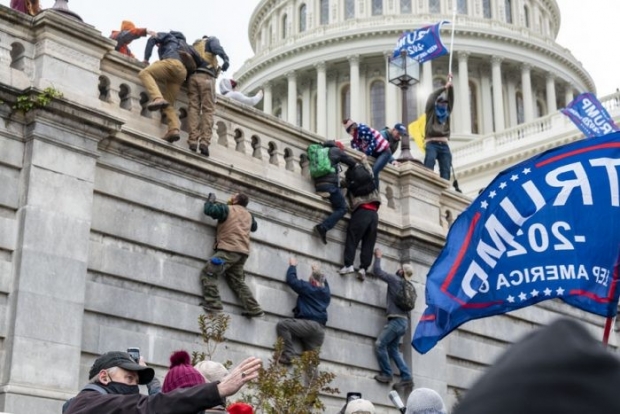 The violence in Washington D.C. last week, which left five people dead and the U.S. Capitol building vandalized, had other wide-ranging consequences.

It led directly to President Donald Trump being impeached by the House of Representatives by a 232-197 vote Wednesday, in which ten Republicans joined all House Democrats. Trump has now been impeached twice, the only such president in history. The breach also prompted a near-universal ban of the social media app Parler; powerful tech companies like Amazon and Twitter say it was used to help organize the violence. The president was also silenced by Big Tech, most notably when Twitter permanently suspended his @realDonaldTrump account last week. Federal law enforcement, meanwhile, has opened over 170 criminal cases into people involved in the Capitol breach.

Many reports about the Capitol breach, especially from left-rated sources but also throughout the spectrum, have framed the president in a negative light. Coverage of impeachment and Big Tech censorship have differed more starkly. Right-rated coverage of impeachment more often says removal is unlikely; left-rated sources have focused more on a second impeachment's unprecedented nature. Left-rated reports often frame cases of censorship as moves to combat false information; right-rated outlets focus more on free speech concerns. Voices on all sides also expressed concern about Big Tech's control over online speech and sovereignty over elected leaders.

On the Blog: We broke down media bias in coverage of the breach, and in reports around the Parler ban; two surveys found that most Republicans opposed the Capitol breach; and be wary of the ways media uses data to mislead you.

Other news and more from AllSides: As the U.S expands vaccine access, many are analyzing the safety of reopening schools; we were recently mentioned as a top ed-tech tool to try in 2021; Balanced news is now available on your mobile device: Download the AllSides mobile app today for iOS and Android; and you can support our work and mission by becoming a sustaining member of AllSides. Sustaining memberships allow you to read AllSides ad-free.

"Twitter CEO Jack Dorsey acknowledged in a statement on Wednesday evening that his company’s decision to ban President Donald Trump from the platform set a “dangerous” precedent and said that it was ultimately a “failure” by the company to “promote healthy conversation”... Dorsey claimed that the company did not coordinate with other tech companies with its decision to ban the president and that other companies either made their own choices or “were emboldened by the actions of others.”"

‘We Just Wanted Our Voices To Be Heard.’ Capitol Protesters Speak Out

"The vast majority of the protesters...did get to the point where they were willing to travel across the country to protest what they believe, not without good reason, was an unfair election. Far from being insurrectionist, theirs is a quintessentially American impulse—and the news media would have said as much if the protesters, and even the rioters, had been left-wing activists objecting to a Trump victory."

"Democrats’ push to impeach Mr. Trump just before he is set to leave office reflects many lawmakers’ deep anger at Mr. Trump’s monthslong campaign to challenge the results of the election, making false claims about election fraud and trying to twist the arms of state officials as well as Vice President Mike Pence to stay in power, culminating in his supporters’ violent actions."

The insurrection at the Capitol challenged the way newsrooms frame unrest

"These are starkly different realities from the websites of news outlets such as ABC, NBC, CBS and CNN, as well as newspaper front pages — both online and in print — from around the country. In recent months, some news organizations have vowed to address shortcomings in their coverage, including how reporters cover protests. If the unrest that followed the police killing of George Floyd was the event that triggered a welcomed media reckoning, then the insurrection at the Capitol could be the event that helps outlets better understand why framing is important."

Majority back impeachment and are concerned about more D.C. violence — CBS News poll

"Even as they widely condemn the violence at the Capitol last week, Americans say there could be more in the days to come: 74% think it at least somewhat likely that there could be more acts of violence attempted next week, during President-elect Joe Biden's inauguration. Seventy percent of Americans don't want to see President Trump's supporters hold protests next week. But most of Mr. Trump's 2020 voters, who are less likely than Americans overall to think violence is likely next week, would favor protests."

Trump Twitter: Republicans and Democrats split over freedom of speech

"Twitter’s decision to permanently suspend Donald Trump’s account in the wake of the storming of Capitol Hill on Wednesday continues to stoke fierce debate, supporters and critics split on partisan lines as they contest what the suspension means for a cherished American tradition: freedom of speech."