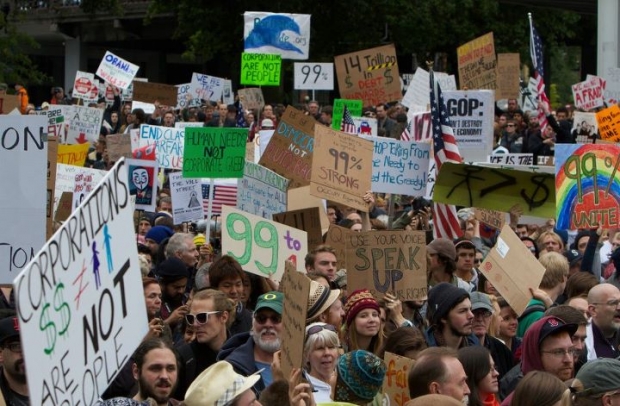 Brigade makes it easy to jump in the pool of political engagement, but the pool is full of muck. Let's clean it up!

What is Brigade? It is a new mobile app from Napster co-founder Sean Parker "that’s meant to quickly get regular people engaged in articulating and debating political positions" (TechCrunch) with the intent to improve democracy by increasing and improving political discourse.

Why aren't more people participating in the political process? Is it too hard and time consuming, or is it that political engagement is filthy and stinks to high heaven?

Imagine that you run a public swimming pool and want more people to use it. You make it as easy as possible by providing plenty of parking and making it accessible to public transit. You make the admission free, and still people are not coming. Finally, you realize that nobody wants to use the pool because the people who use it are always fighting and the pool is full of dirt and muck.

Think of what happens when you engage in an issue. If any of your friends disagree with you, you fear you might be shunned, kicked out of social groups, and berated as either evil or stupid. This is truer than ever today on Facebook. All the fighting and fear of disrespect turn you away.

If all your friends agree, maybe you can avoid fighting. But eventually you realize that you have become part of a close-minded tribe that propagates narrow minded, one-sided arguments and pushes out anyone different and any ideas or facts that do not fit in with you thinking. Slowly you become disgusted with that animosity and begin to realize that you are part of the problem by supporting a polarized, dysfunctional system. It just stinks.

Brigade has taken a step in the right direction, making it easier to jump into the pool. Brigade is like a social network where you offer positions on current events and issues, whereas other networks don’t. Also, Brigade wisely shows both agree and disagree statements about a position, helping people see both sides.

At this stage, it stops there. If they are not careful, Brigade could become another online service that is so focused on connecting people just like each other that they could, like so many other online networks, pit us against each other. The groups become more polarized, more fixed in their positions, and of a government and society that is so divided it can't get anything done for the common good.

How do you make political engagement more functional?

As a human species we know how to get people together and talk in a productive and civil way, even if we passionately disagree with each other. We do this all the time in conflict resolution, family counseling and mediation practices. Online social networks just haven't caught on to this ... not yet.

It comes down to some basic steps. Establish our common humanity, listen to facts and opinions from different perspectives, and engage in civil dialog. Then we can act for the common good. It might look something like this:

1) Establish our common humanity even (or especially) with strangers. In person, start with shaking hands, having polite conversation, offering a beverage and other basic niceties. Online, you can learn a bit about new people (their interests, backgrounds) establishing a basic relationship first.

2) Establish a common ground of knowledge. To various degrees, we all are caught within information bubbles that are misleading because they tend to ignore or discount facts and opinions that support alternative positions. We need to hear facts and opinions from different perspectives in order to start a productive discussion.

3) Engage in a civil conversation. We are already off to a good start by establishing a human connection and listening to different perspectives. To make it all come together, the way we have dialog is critical. In person, we agree to some ground rules and might even have others to help moderate if we get off track. Online, we can use specially designed interfaces that structure the conversation and reward best behaviors.

Do people really want something better?

Absolutely yes. There are easily a hundred different organizations, groups, start-ups and initiatives that have started in the last few years devoted to civil dialog, bi-partisan solutions and going beyond the hyper-partisanship that has left our government dysfunctional and our society on edge. A movement against hyper-polarization and close-minded behavior has started.

Doing this will turn Brigade into a truly disruptive service that can improve online discourse, democracy and our future.

"Jump in - the water is clear and warm."