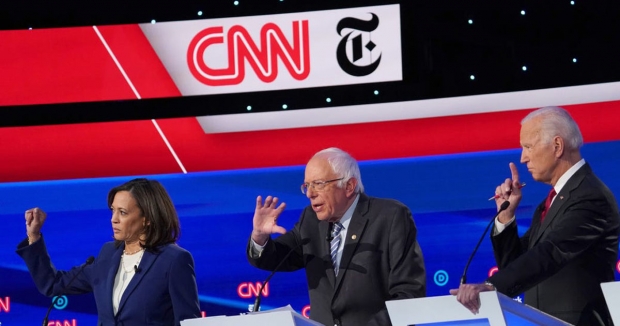 While there can certainly be a lot of ideological diversity among members of the same political party, Republicans and Democrats generally share the same stances on key issues as their fellow party members. So when ideas switch parties entirely, things can get interesting.

Today, issues such as trade, immigration, and U.S. involvement in Syria reveal Democrats and Republicans may be having a bit of an identity crisis. Ideas that were once commonly held by Democrats are now held by Republicans and vice versa.

During last Tuesday’s presidential debate in Ohio, all 12 of the Democratic hopefuls condemned President Trump’s recent decision to pull troops out of Syria. The majority said troops should remain in Syria; the only candidate who somewhat strayed from the party line was Rep. Tulsi Gabbard (D-HI), who said members of both parties fuel "regime change wars" across the Middle East.

The Democrats’ current position on Syria represents a stark contrast from Democratic stances in the past. Traditionally, Republicans have been more hawkish on foreign policy, advocating to keep troops in the Middle East in order to clamp down on ISIS and prevent them from attacking the U.S. while many Democrats advocated for the removal of troops abroad. In a 2014 survey, 94 percent of Republican leaders surveyed supported keeping a U.S. military presence in the Middle East to increase stability, compared to 65 percent of Democratic leaders.

This could be viewed as a shift in party positions. While some Democrats are more hawkish and may often agree with Republicans on military action, the Democratic position taken during the Ohio debate represents a shift, with the lead Republican now acting like the anti-conflict dove.

Are Democrats taking this new stance simply to counter Trump? Or is Trump simply becoming too far “left” and abandoning more traditional Republican approaches? Is it opportunistic, something to set them apart from Trump to help them get votes? Or does it represent a real and lasting shift for either party?

It’s Not Just Syria: Democrats and Republicans Shift on Trade and Immigration, Too

Syria isn’t the only topic on which parties could be shifting. On the issue of trade, Republicans have historically touted the merits of free trade, while Democrats have emphasized “fair and balanced” trade — defending tariffs and other policies that are meant to protect native workers or ensure other countries act well. Republicans charged Democrats with making goods more expensive and hurting the economy with these types of policies.

Yet in 2019, this issue is another in which stances appear to be switching. Trump’s tariffs have been met with sharp criticism from Democrats. During the September debates, Former Housing and Urban Development Secretary Julián Castro called Trump’s approach to trade “erratic” and “haphazard.”

While the proposed Democratic policies aren’t exactly free trade policies, the attacks on Trump’s trade policies is notable, especially because “at times, Trump's rhetoric on trade has sounded pretty much indistinguishable from that of the most liberal Democrats,” according to Jim Zarroli at NPR (view the NPR bias rating here).

Similar shifts in party ideology are occurring on immigration as well. Historically, Democrats have been a fair trade, pro-union party; unions are often concerned about free trade and immigration because of the threats they pose to native jobs. But lately, many Democrats advocate a more lax immigration policy, including decriminalizing illegal border crossings and increasing current legal immigration levels. Conversely, those on the right now voice concerns about how an influx of immigrants might lead to stiffer competition for jobs and depressed wages among the working class.

Are these permanent switches in Democratic party ideals, or a temporary shift in an effort to beat Trump? The fact that Democrats are unhappy with Trump for implementing what Democrats used to consider reasonable trade, immigration, and military policies is a big switch in the party orthodoxy. Time will tell if the ideas stick, or are just a passing protest in a moment of polarization.

John Gable is the CEO and co-founder at AllSides. He has a Lean Right bias.

This piece was reviewed by Henry A. Brechter, AllSides Daily News Editor. He has a Center bias.