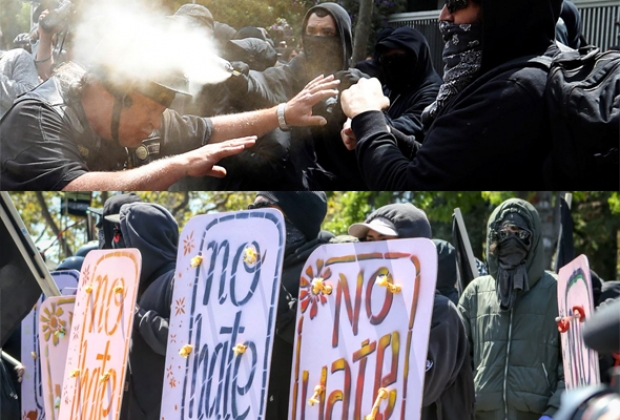 At this time of crisis in Texas and Louisiana, we at AllSides and the rest of America have all victims of Hurricane Harvey in our hearts.
Other news demonstrates how America may not be that united...
Antifa is a self described anti fascist group from the far-left that fights more against far-right ideologies than for political policies. Antifa groups have existed for decades, first influenced by European groups in the 1930s then revived in the 1990s, but have recently become more prominent as a reaction to white supremacists. But critics point out that they are opposing and working to silence any voices they don't like, even when they are not from racists, making people afraid to speak openly and freely.
Some people say they, like their counterparts on the far-right, are just exercising their rights to free speech. Others argue that violence is necessary. However, their black masks to conceal their identities and destructive and sometimes violent behavior, such as beating some conservative protesters, has led to leaders on the right and left condemning them. Minority Leader Nancy Pelosi suggest they should be arrested and prosecuted. By the end of the week, the press and leaders from the Left and Right all made statements denouncing Antifa, but there have been many more perspectives throughout the week.
Happy Fall to all our teachers and librarians! There is still time to sign up for our newest offering for Schools - Mismatch - and be (mis)matched with another classroom. Learn more about Mismatch or sign up now!
Snippets from the Right
OPINION: Berkeley proves liberals are enabling Antifa violence
Washington Examiner
"Bauer, Berkeley, and all their supporters are wrong. By tolerating the idea that some individuals are not entitled to practice their right to freedom of assembly, we lend credibility to the idea that they are legitimate targets for violence. In doing so, we excuse government failures to protect the rights of our fellow citizens and the sanctity of our democracy."
‘Designating’ Antifa a Terrorist Organization Is a Bad Idea
National Review
"The violent radical leftist group that goes by the Orwellian name 'antifa' (anti-fascist) 'is thuggish in its tactics and totalitarian in its sensibility,' as Rich Lowry forcefully put it in a column on Tuesday. It also engages in terrorism. The eye-test leaves no doubt about that.
...
Right this minute, in terms of confronting antifa or any other domestic terrorist organization, we have a more robust array of state and federal law-enforcement powers than we have ever had. Moreover, coordination between federal and state law-enforcement and national-security officers is as good as it has ever been. All that is required to gut antifa is the will to do it — the will to say, 'Regardless of our disparate political views, we Americans draw the line at violent extortion that eviscerates our right to speak, assemble, and engage in constitutionally protected political activity.'"
Snippets from the Center
A Modest Proposal for America's Fascists and Anti-Fascists
Bloomberg
"After all, this is not a fight for the soul of America. Neither the Tiki-torch Nazis nor the masked anarchists represent a viable American future. They are simply engaging in nostalgia, a scarier version of Civil War battle re-enactments.
...
To get a sense of the depravity of that political moment, read George Orwell's 'Homage to Catalonia,' a brilliant memoir of his time fighting in the Spanish civil war. Spoiler alert: The socialists and the fascists fighting for Spain were both authoritarians. Antifa today is the heir not to the Western allies who fought the Nazis, but rather the Soviets who bled them out on the eastern front. After the Third Reich fell, the red army turned the Eastern European states in its dominion into vassals. 'Antifa' is a misnomer. It's more like 'also-fa.'"
Antifa's unfortunate gift to the far right
Chicago Tribune
"As for antifa followers, they should remember — as the Rev. Martin Luther King Jr., among others, nobly showed — you maintain your moral authority by resisting the temptation to adopt the violent tactics that you deplore in your opponents."
Snippets from the Left
Why the Media Refuses to Understand Antifa
Pacific Standard
"Among those on the broadly defined left, the main strategic split with regard to fascists has been between those who favor prevention by any means (up to and including physical confrontation), and those who think it's best to let the marketplace of ideas take care of their worthless ideology. Call it antifa versus free speech. A lot of people have changed their position on this in reaction to unfolding events, but the poles have remained intact. Antifa still wants to bash the fash, and free-speechers still want to tease the KKK into obscurity like Superman did. Somehow, both sides still think they're right.
...
But antifa isn't trying to earn the support of 51 percent of any electorate. Our main concern is winning, and we don't need nearly that many people to do it."
OPINION: Violent demonstrators in Berkeley are thugs, not activists
LA Times
"This is thuggery, not activism. And it has become too familiar a phenomenon in Berkeley, belying its reputation as a citadel of free speech. In February, for example, 150 black-clad agitators caused $100,000 worth of damage when they smashed through the city protesting a planned UC Berkeley speech by right-wing provocateur Milo Yiannopoulos. The speech was canceled."
Discover more on this topic on AllSides.
Antifa, Anti-Fascists, Free Speech, Story Of The Week, News