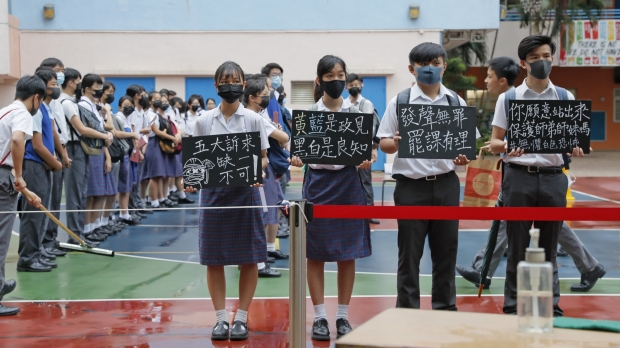 Hong Kong chief executive Carrie Lam announced the withdrawal of a controversial bill that would have allowed Hong Kong residents to be extradited to mainland China for trial. The bill, which had been suspended since July, led to months of protests.

A majority of news coverage acknowledged that despite Lam's apparent backpedal, the Chinese government's decision to withdraw only meets one of the five demands protesters outlined in July. Most reporting focused on reactions from protesters and pundits, who suggest that protests will continue until more concessions are made.

Regardless of political leaning, most subsequent commentary was highly critical of the Chinese government.

Learn how to spot media bias yourself. AllSides explains the different types of media bias and how readers can identify each. Learn more here.

Hong Kong leaders pull extradition bill, but too little too late, say some

"[Lam's] televised announcement came after Reuters reports on Friday and Monday revealing Beijing thwarted an earlier proposal from Lam to withdraw the bill and she had said privately that she would resign if she could."

"The bill would have allowed extraditions to mainland China where courts are controlled by the Communist Party. Its withdrawal is a key demand of protesters but just one of five. The move came after pitched battles across the former British colony of 7 million. More than 1,000 protesters were arrested."

"Protests against the bill, which if passed would have seen suspected criminals sent to mainland China to be tried, are now in their 14th week. Lam initially refused to completely withdraw the extradition bill, instead saying that it had been "suspended" on June 15."

"Joshua Wong, a prominent Hong Kong pro-democracy activist, wrote on Twitter that Lam's withdrawal of the bill would not mollify protesters: "Too little and too late now — Carrie Lam's response comes after 7 lives sacrificed, more than 1,200 protestors arrested, in which many are mistreated in police station.""

"Despite [Lam's] concession on the extradition bill, protesters vow to keep pressing their other demands, such as universal suffrage. Yet at least now Beijing’s strong backing of the measure has been shown to be a mistake, damaging its credibility. And it can no longer claim a Western conspiracy behind protests that Ms. Lam deems quite legitimate."

"Since 1992, following the collapse of the Soviet Union, China’s party has pegged its survival on convincing Chinese they are vulnerable to foreign powers. In Hong Kong, however, that narrative has been challenged by protests that seek to keep the rights and liberties left behind by British rule before 1997, when the territory was handed over to China."

Hong Kong protesters say one down, four to go on demands as extradition bill is officially withdrawn

"In a surprise turnaround from previous statements, Lam announced a formal withdrawal of a controversial extradition bill that sparked massive demonstrations. She made the announcement in a pre-recorded television broadcast just before 6 p.m. Wednesday. “The government will fully withdraw the bill in order to fully allay public concerns,” she said."

"The decision to cave in to one of protesters' five core demands marked a dramatic U-turn for Lam, who for months has refused to withdraw the bill. "We must find ways to address the discontent in society and look for solutions," Lam said in a a video statement Wednesday evening. "After more than two months of social unrest, it is obvious to many that this discontentment extends far beyond the bill.""

"Activist Joshua Wong, who was last week arrested in a police sweep of activists and opposition politicians, wrote on Twitter: "Carrie Lam's repeated failure in understanding the situation has made this announcement completely out of touch - She needs to address to ALL Five Demands: STOP PROSECUTION, STOP CALLING US RIOTERS, INDEPENDENT INQUIRY OF POLICE and FREE ELECTION!""

Hong Kong's controversial extradition bill will be withdrawn, but it's too late to stop the protests

"While the demonstrations were initially focused only on the bill, they have morphed into a wider pro-democracy movement, paralyzing Hong Kong and plunging the city into its worst political crisis since the end of British rule in 1997."

"Leader Carrie Lam, 62, made the announcement Wednesday. A full withdrawal from the bill, which would have allowed people in Hong Kong to be extradited to mainland China, was one of the main demands that demonstrators had. She had previously suspended the bill in July, although protests continued in the streets."

"In addition to withdrawing the bill, Lam said there would be “direct dialogue” with people in the special administrative region and the appointment of two new members to the Independent Police Complaints Commission. Stocks in Hong Kong rallied upon the news, with the Hang Seng index gaining more than 4% value."

Hong Kong protesters and activists say withdrawal of extradition bill is too little, too late

"Following Lam’s announcement, Civil Human Rights Front (CHRF), the organizer behind recent protests that drew millions of participants, wrote on its Facebook page that Lam has made a “major political error” if she believed the current crisis could be resolved by her fulfilling just one of the five demands protesters have called for since June."

"Calling Lam’s decision “a fake concession,” Wu Chi-wai, chairman of the Democratic Party, also worried that the withdrawal would pave the way for more aggressive tactics to quell protests if protesters continue to turn out after the announcement—as the government would then have a legitimate reason to clamp down."

"The bill in question would have allowed the Communist Party of China to extradite anyone present in Hong Kong, not just Hong Kong residents or Chinese citizens, into the Chinese prison system if accused of violating communist “crimes.” China has notoriously “disappeared” thousands of political dissidents into its prison system and severely restricts free speech and religious activity. Multiple investigations have found that China uses its political prisoners as forced organ donors, cutting them open and taking their organs alive to fuel a million-dollar industry."

"Lam also announced that she would modify the membership of the existing police oversight organization, the Independent Police Complaints Commission. This is a nod to one of the remaining four demands – an independent inquiry on police brutality against protesters – but does not address concerns that the police would exonerate itself of human rights crimes if it conducts the investigation."