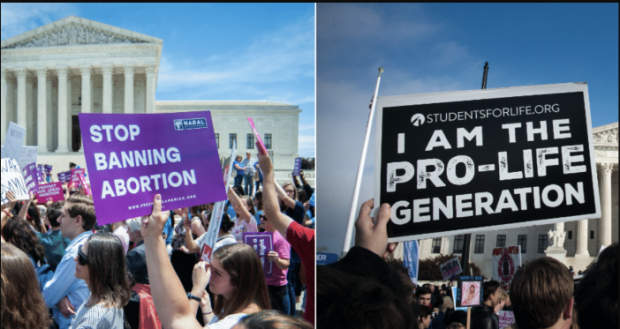 Images by Rena Schild and Jeffrey Bruno via Shutterstock

What Can We Learn From Previous Abortion Debates and Their Outcomes?

The firestorm over abortion that was recently reignited —first by the leaked draft of the U.S. Supreme Court’s decision and now by the current decision overturning Roe. v. Wade—is merely the smoke before the conflagration. Given the timing of this decision—months before an increasingly contentious midterm election and sixty years into a trend of runaway political polarization—it is likely that the polemics and protests we’ve witnessed are merely a harbinger of catastrophe to come. Political violence was already on the rise well before this news. With about one-third of Americans reporting a readiness to resort to violence to “save our country” and divisive politicians poised to pounce on this issue to mobilize their bases, our communities are likely to become even more volatile.

So, now is the time to talk. No, I am not recommending that we simply reach out to someone random on the other side of our divide and discuss abortion. Studies show that attempts to discuss heated political issues often backfire, leaving us feeling angrier and more alienated. I also don’t believe that one-on-one conversations between local citizens are the right approach to preventing political violence in the near future. However, what can help – and what has shown to mitigate acute civil unrest in the past – is the joining of our community leaders to discuss their differences with the primary purpose of mobilizing their constituents to prevent the worst.

Boston: a Blueprint for Talking with the Enemy

Consider what transpired in Boston in the 1990s. As one of the most Catholic cities in America, Boston’s long history of acrimony between its active pro-life and pro-choice communities is legend. In the 90s, tensions over abortion in Boston peaked, culminating in a series of horrific shootings at women’s clinics in 1994. Out of concern over more violence, three pro-life and three pro-choice leaders came together for secret dialogues. They were six women activists who had been fighting against one another over abortion for decades.

The talks were initiated by Laura Chasin and Susan Podziba of the Public Conversations Project, who reached out quietly to these leaders and urged them to consider meeting with the opposition. They eventually agreed and although the process was initially excruciating, with expert facilitation they managed to continue meeting together for years. Over time, they learned to work with each other despite their concerns for their careers and personal safety. Then, on January 28, 2001, they went public by co-authoring an article in the Boston Globe called “Talking with the Enemy.”

The Results of the Boston Abortion Initiative

These talks had three extraordinary effects. First, after years of dialogue—during which they learned about the others’ personal lives, courage, integrity, and tireless work to prevent more violence in the community—the women nevertheless found themselves even more polarized over the issue of abortion. Ironically, by agreeing to drop their inflammatory rhetoric and speak personally about their feelings on the issues, the participants found themselves even more committed to their original positions. They wrote: “Since that first fear-filled meeting, we have experienced a paradox. While learning to treat each other with dignity and respect, we have all become firmer in our views about abortion… We saw that our differences on abortion reflect two world views that are irreconcilable.”

Nevertheless, despite their profound moral differences, the relationships between the women became much closer. To this day, 25 years later, the group continues to meet to support one another during times of loss and celebration.

Second, the women reported learning a great deal about the trade-offs and contradictions inherent in their own positions on abortion. One participant noted, “We never talk on our own sides about the shades of gray. When you are involved in a political movement like we are, we are focused on mobilizing the troops and the way you do that is we paint things in the starkest possible terms so that people are moved to act, so they know what to do. We don’t have conversations about things we have doubts about or are more murky.” The challenges posed by the conversations and the quality of engagement opened the leaders’ minds to previously neglected aspects of their own views, which ultimately changed their approaches to advocacy.

Finally, the transformation of these six leaders seemed to affect the broader climate of the debate over abortion. The group’s decision to go public, particularly given the risks they took and their statuses within their communities, resonated widely. Susan Podziba later summarized the wider effects of the process: “The talks among the leaders of the pro-life and pro-choice movements in Massachusetts contributed to a shift in the public rhetoric and increased security.” Years later, journalist Mary Barron observed, “The reduction in angry rhetoric that resulted from the dialogue may have helped assign to history that ugly chapter in the abortion controversy.”

These actions from the 90s provide some insights into reducing the odds of violence over our nation’s political divides. First, note that the shootings in Boston awakened many to the need for a significant reset in the approaches to political activism. The January 6 Capitol riots may have offered a similar wake-up call, prompting a careful, well-facilitated process involving courageous and influential community leaders from different sides of the issue. Additionally, today, thousands of bridge-building groups are trained and ready to offer such guidance in cities and towns across our country.

Most importantly, the success of the Boston initiative required that the fruits of the leaders’ encounters eventually permeated through their networks of influence into the broader community to affect societal change. In other words, changes in the leaders’ own attitudes, relationships, and approaches to their activism had profound downstream effects on their constituents’ behaviors, community norms, and taboos around dealing with deep ideological divisions. Given that these types of change will take considerable time to come into force, now is the time to talk.