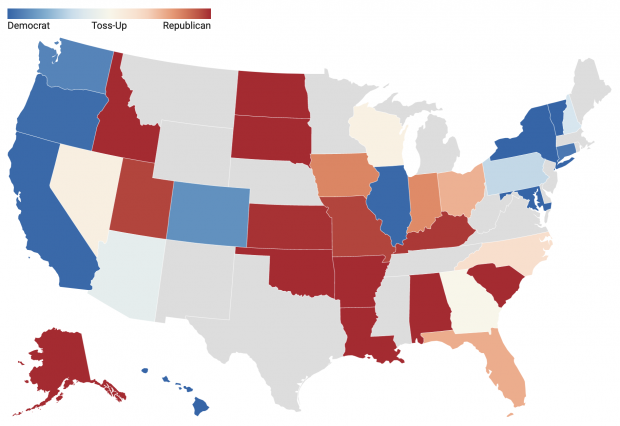 Pennsylvania. Georgia. Wisconsin. Several key states are expected to determine which political party will own control of Congress this year.

AllSides is helping you track the odds of those and the rest of the U.S. House and Senate races in the 2022 midterm elections.

In the spirit of showing all sides, we also invite you to check out these other election forecast models and rakings: FiveThirtyEight (Center), Politico (Lean Left), Fox News (Right), 270toWin, The Economist (Lean Left).

Republicans have a 79% chance of taking the U.S. House

Our projection has Republicans in 228 of 435 seats following the election.

After redistricting, all 435 seats of the U.S. House of Representatives are up for election in their new boundaries.

Republicans have a 71% chance of taking the U.S. Senate

Our projection has Republicans in 51 of 100 seats following the election.

Thirty-five seats in the U.S. Senate are contested, and current projections show that Republicans have a slight edge for control in 2023.

View latest news, polls, and examples of media bias in AllSides’ 2022 Midterm Elections live blog and view a map of key races to watch on our Election Topic page.

How This Model Works

This AllSides Interactive is a partnership between AllSides and Dodge Matthews. The 2022 Election Forecast Model takes into account polls on individual races, national sentiment towards each party, history of past midterm elections, and more to estimate the vote share of candidates in a race and the probability that they will win.

To develop an expected vote share for each candidate the model incorporates, the inherent state lean (ISL), approval rating, primary results, and polling averages are calculated. The ISL was created for each state and used past election results to determine what the expected vote share in each state would be in a perfectly equal national political environment. The model incorporated FiveThirtyEight’s partisan lean and Daily Kos’s 2020 presidential vote on the 2022 U.S. House district map to determine the ISL for each U.S. House district.

Election Forecasting Models aren’t perfect, but they can help paint a picture of what the results may look like in November. For more information, email andrew@allsides.com and/or dodgejmatt2000@yahoo.com.