From one perspective, the welfare system offers a crucial service to those who cannot help themselves. By another view (see Welfare State), the welfare system only gives demoralizing and demeaning crumbs to the poor, gives more to the middle class, and gives the most to corporate owners and managers. From yet another perspective, without denying a real need for some to receive help of some kind, America’s welfare system has too often perpetuated unhealthy dependency on the state - while coercing citizens to foot the bill.  From this perspective, welfare consists of a kind of 3rd party theft:  "Welfare is the act of stealing from the workers to feed the lazy and uneducated."

For those who despise the system, they contrast it with their own self-understanding as a person who is not themselves dependent on an impersonal economic system (as in "I'm not one of those freeloaders, I have self-respect).

In 1996 shared concerns about the then-existing system led to substantial changes to decrease unnecessary dependency - such as the Personal Responsibility and Work Opportunity Reconciliation Act signed by Bill Clinton, which turned Aid to Families with Dependent Children (AFDC) into Temporary Assistance to Needy Children (TANF).

Critics of the new law say that it both fixed “problems” that were imaginary to begin with and it created a deeply flawed system that leaves out many very needy and deserving families. For example, the new work requirements are (a) based on percentages of caseload (which gives states an incentive to kick people off assistance) and (b) allow states to use bogus training experiences to meet the targets.

The critics who oppose taxpayer-funded welfare itself are sometimes accused of lacking compassion, but many insist that there is more than one way to care for the poor and needy. They highlight (and often step up to participate in) non-governmental, voluntary systems such as the Mormon welfare system.

Some reply that charity and voluntary systems are good and should continue to be supported with tax breaks and such (unless they happen to be systems of proselytizing or shaming) but that such efforts could never come close to meeting the need that is present in the population.

There are, finally, defenders of the welfare system who argue that there is no actual evidence that welfare programs create single-parent families or lead to patterns of dependence, that instead the rate of single parenthood is (over the past 50 years) up in all economic groups, that families on public assistance do not on average have more children than other families, and that the vast majority of recipients are on assistance for a year or less. 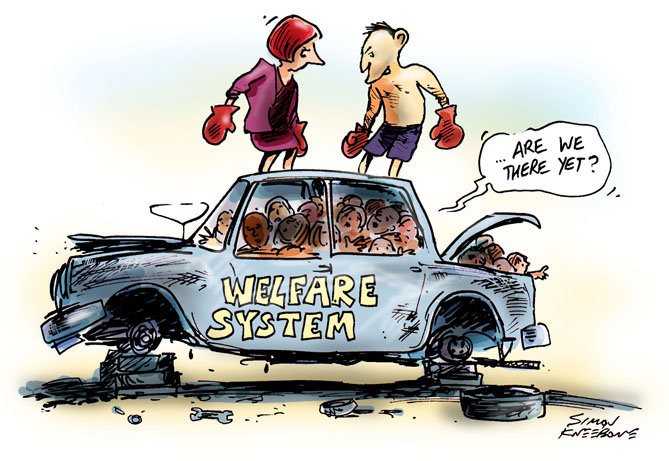